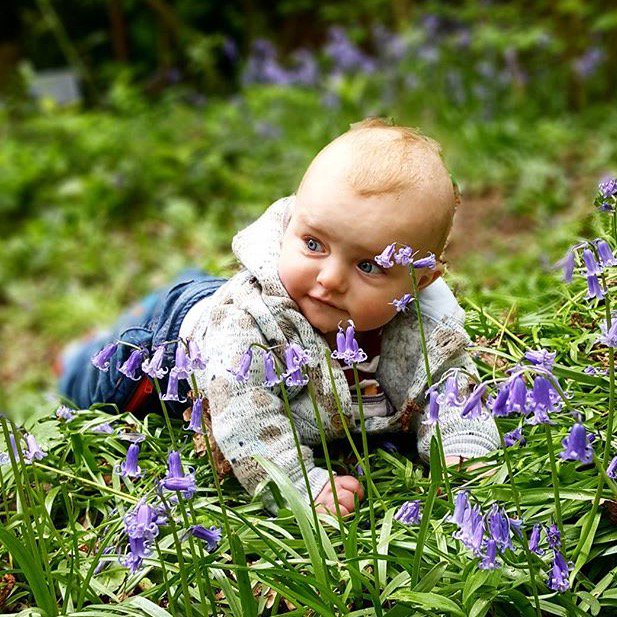 OK, I am over 2 weeks late with this update, oops! Now that Alex is crawling (yup, already), I don’t really get much opportunity to blog as often as I would like as I can’t take my eyes off him for a single second. It has been an eventful month to say the least, here’s what has been happening since Alex’s last update. 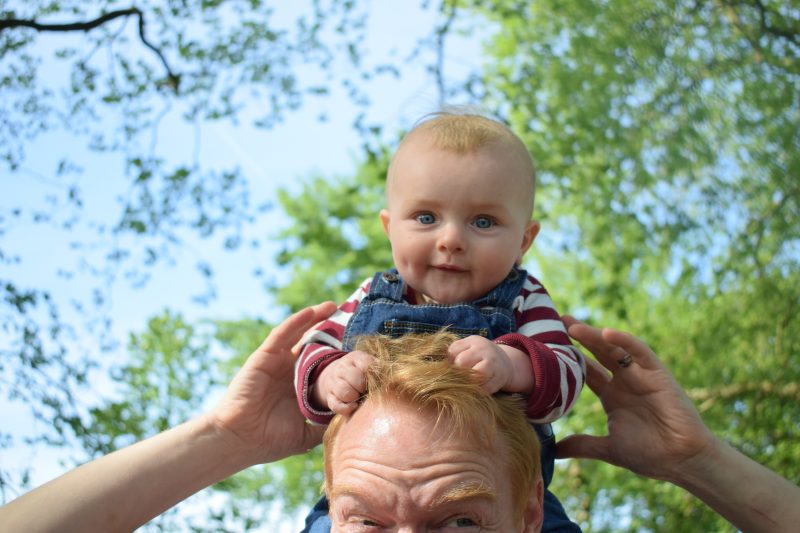 Size: As I continue to be embarrassingly disorganised I still haven’t managed to get Alex to baby clinic so once again I’m clueless as to what he weighs. He is definitely getting heavier and, even though I don’t weight lift, I have the biggest arm muscles I have ever had. The 3-6 month clothes have all been bagged up and put in the loft and Alex is now fitting nicely into 6-9 months. 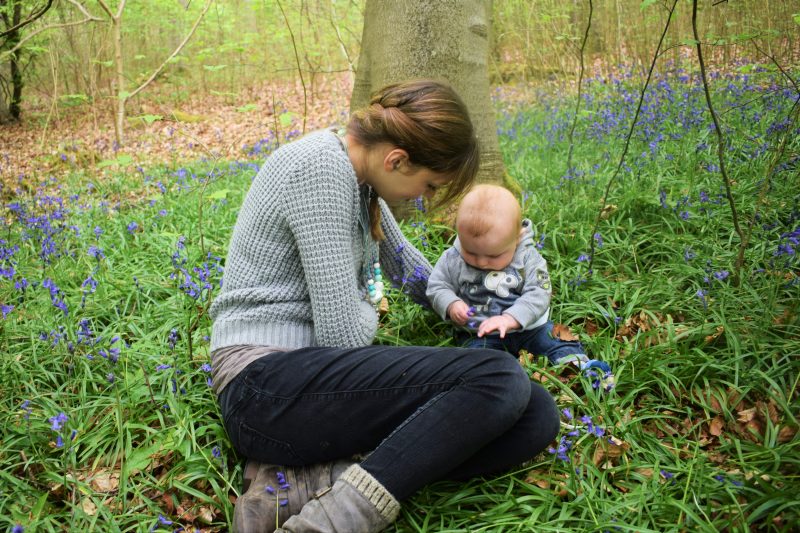 Teething: Finally, there are teeth! Two teeth in fact, the first popped through at the beginning of May and the other appeared about 3 weeks later. Alex has his 2 bottom front teeth and you sure know about it if he fancies having a chomp on your finger. The weird spikey tooth is still nothing more than a tiny spike, starting to wonder why it hasn’t you cut through yet. We have had lots of tears with this teething business and it’s been really stressful at times  (here is my post aaall about why I hate the teething stage). 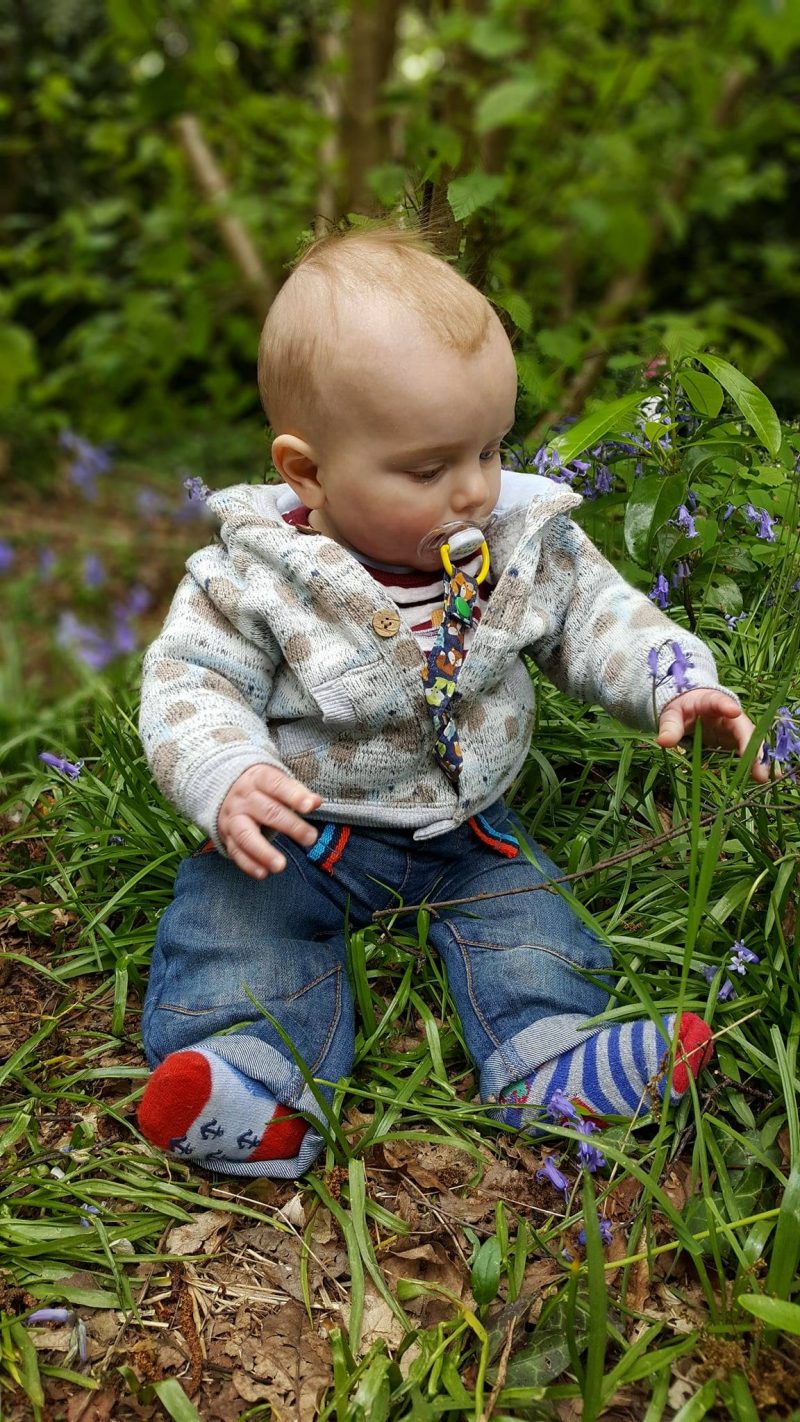 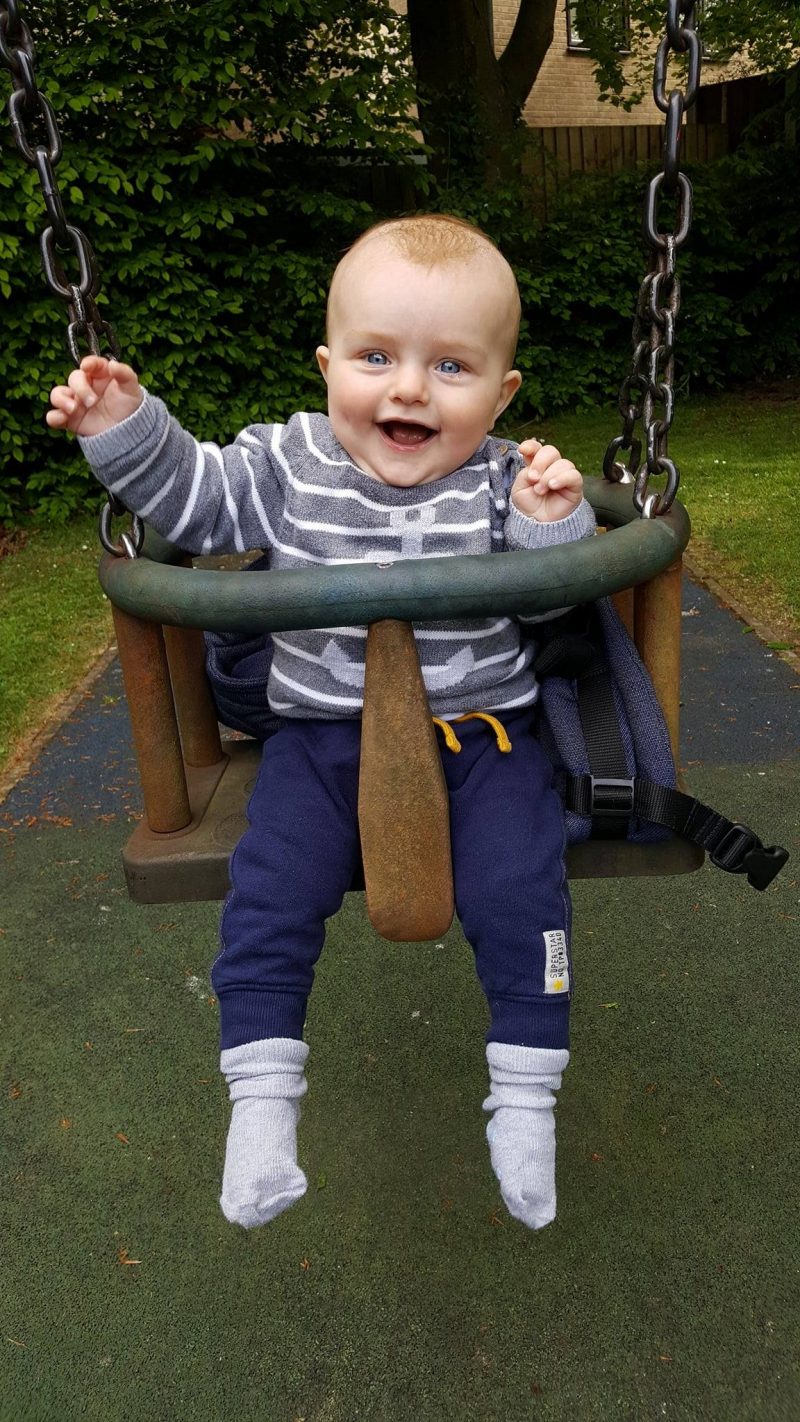 What he likes/dislikes: Alex pretty much likes everything he is not allowed to have! Phone chargers, Leo’s toys with small pieces, my phone, mugs of hot coffee – This baby of mine will try and get his hands on anything he’s not supposed to touch. He does like playing with some of his own toys too though, the Fisher Price coy and the crawling ball thing still seem to be firm favourites and he has also enjoyed playing with some of Leo’s old baby toys I found in the back of the wardrobe. Food is another thing Alex is enjoying at the minute, but more about that later. The one thing Alex seems to be loving A LOT this month is swings, he is the complete opposite of Leo who still hates going on  a swing now at nearly 4. Alex is really starting to show when he doesn’t like something lately and the thing he seems to dislike the most is being away from me. As soon as I put him down his little face crumpled and he starts crying. The same thing happens when I give him to someone else to hold, the look of betrayal in his eyes is a hilarious as it is heart breaking, you’d think I was abandoning him forever the way he cries sometimes. He also doesn’t enjoy being without is dummy, I must admit this is something that does worry me as I was kind of hoping to wean him off it soon but this is looking very unlikely. 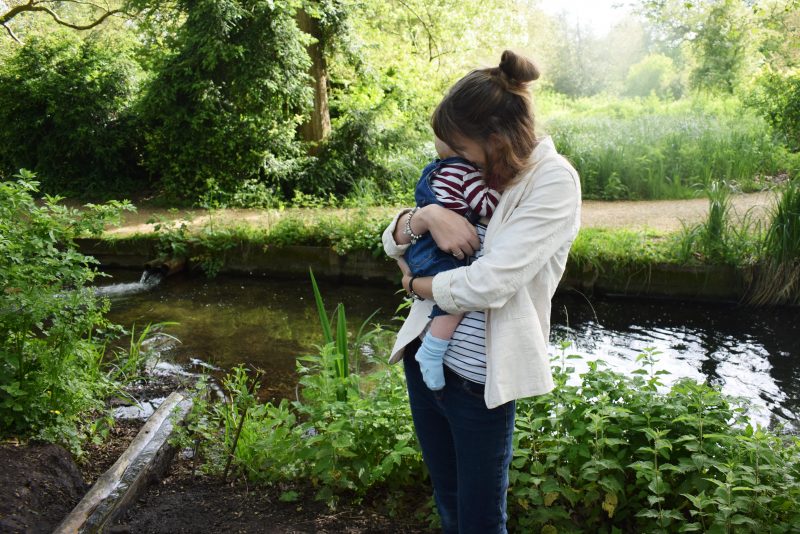 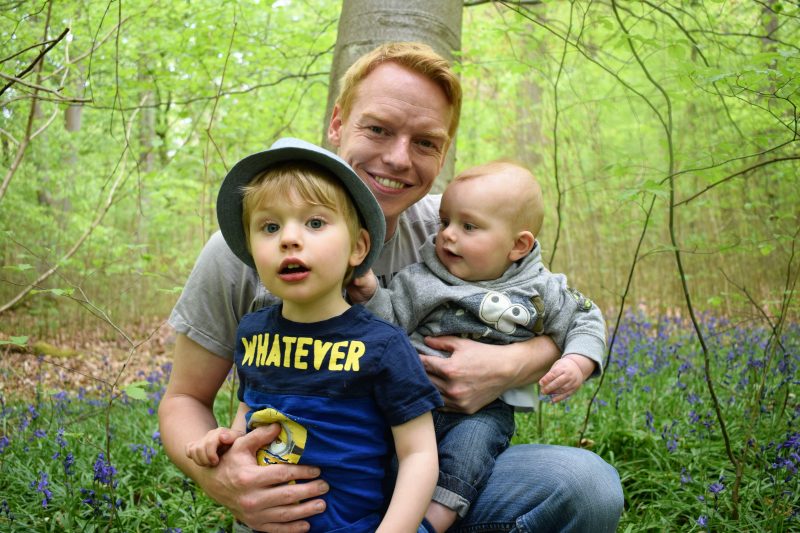 Character: Despite teething and what can only be separation anxiety turning him into a clingy, fussy and grumpy baby at times, Alex is still showing us that he is a very chilled and happy boy. He loves smiling and laughing at everyone (especially pretty girls, little flirt) and he really does love snuggles and kisses. He is a little explorer now that he is on the move and he loves rolling and commando crawling all over the place. I love watching his little face as he discovers new things and plays with them in his hands, getting used to how each thing feels against his skin. I can see his feisty, independent side too, I am sure he has started having mini tantrums when I take things off him that he isn’t allowed. 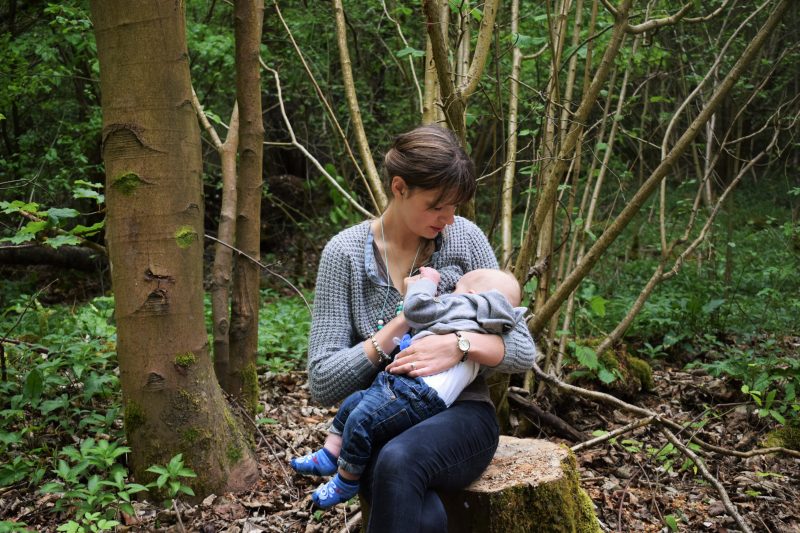 Feeding: 7 months in and breastfeeding is still going strong, even with 2 little teeth to contend with. Alex is still being breastfed about 5 times a day, the length of each feed definitely is getting shorter though so I’m pretty sure he’s starting to take less milk as he is eating more solid food now. Alex does bloomin love the boob though and I’m pretty sure he is not going to be wanting to give it up anytime soon. I absolutely love the cuddles though and when he gazes up into my eyes and smiles when he’s feeding it really is a precious moment. 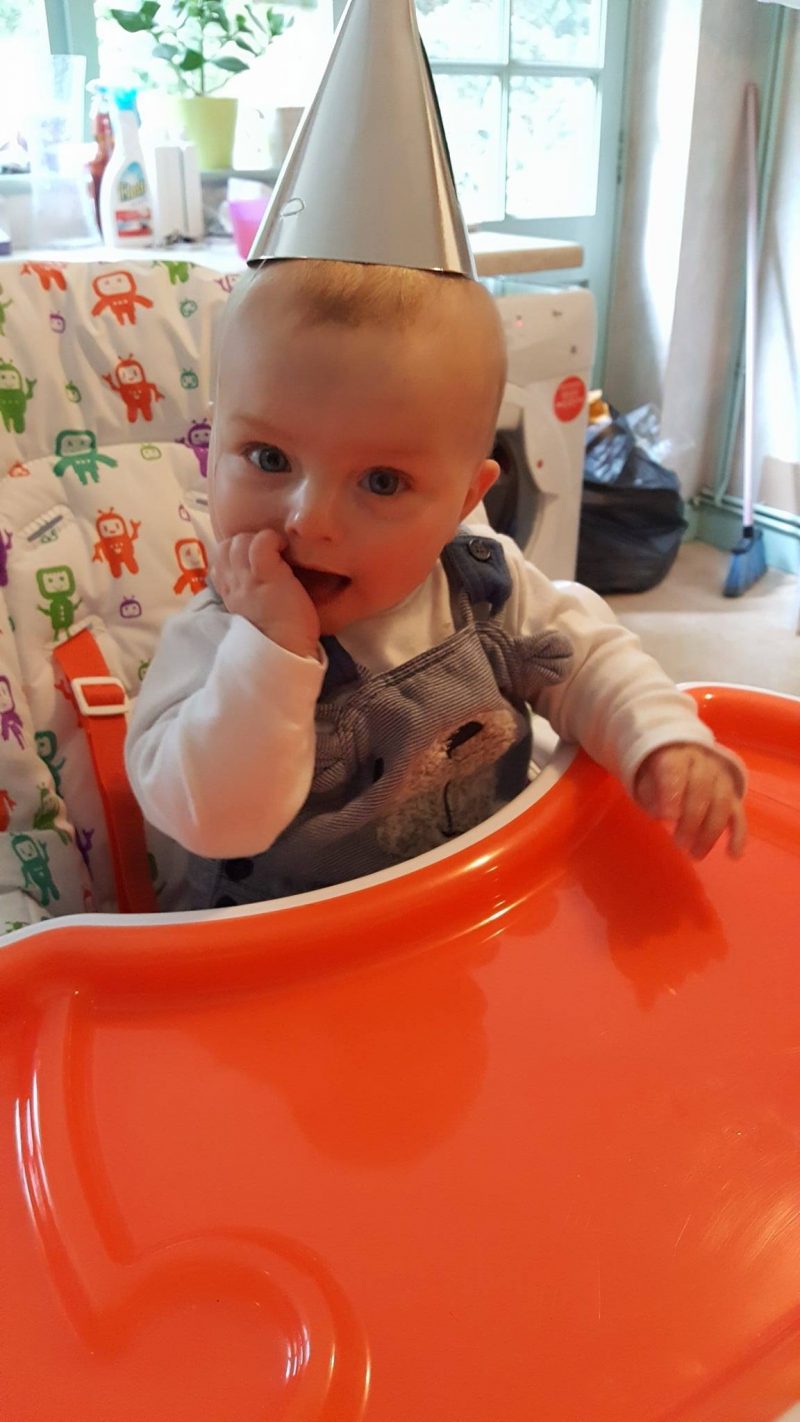 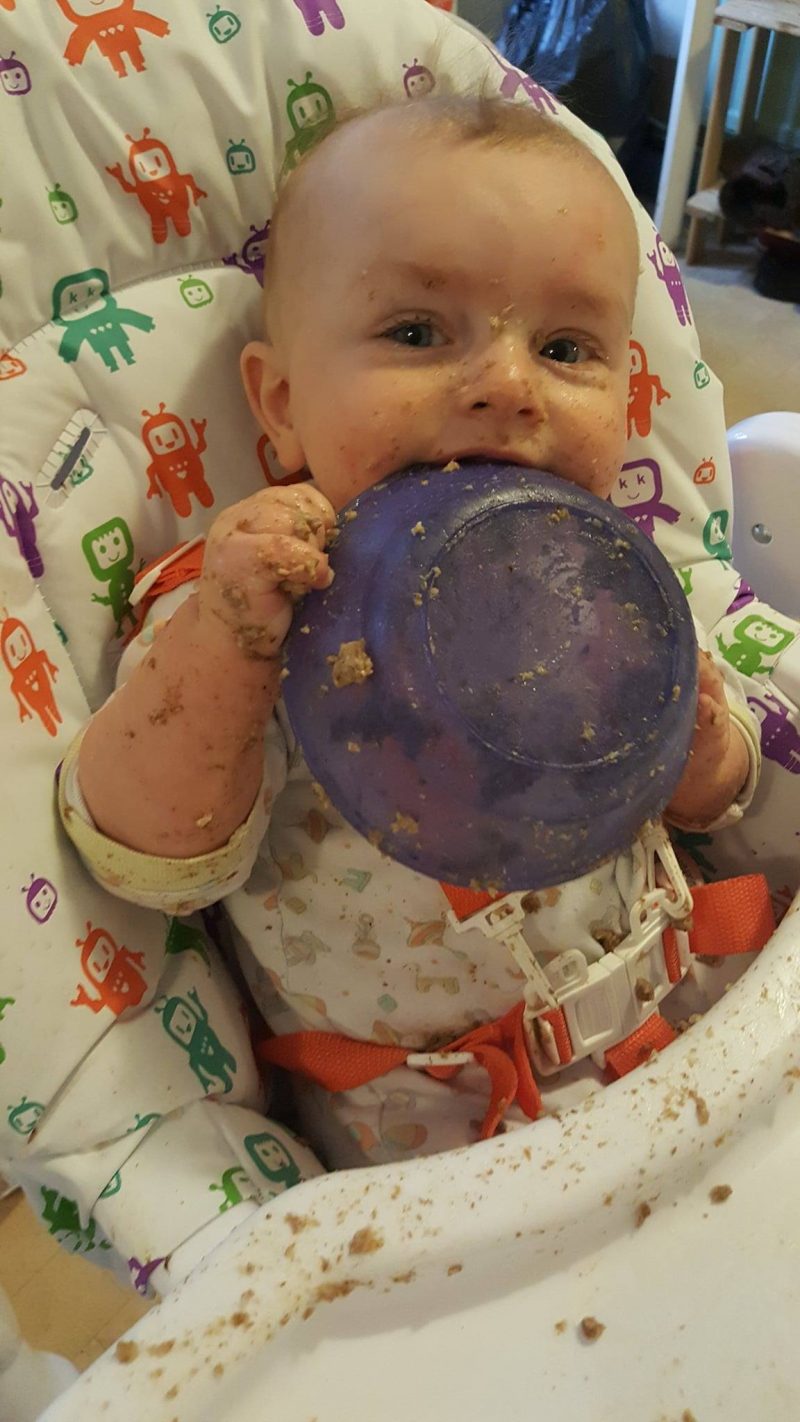 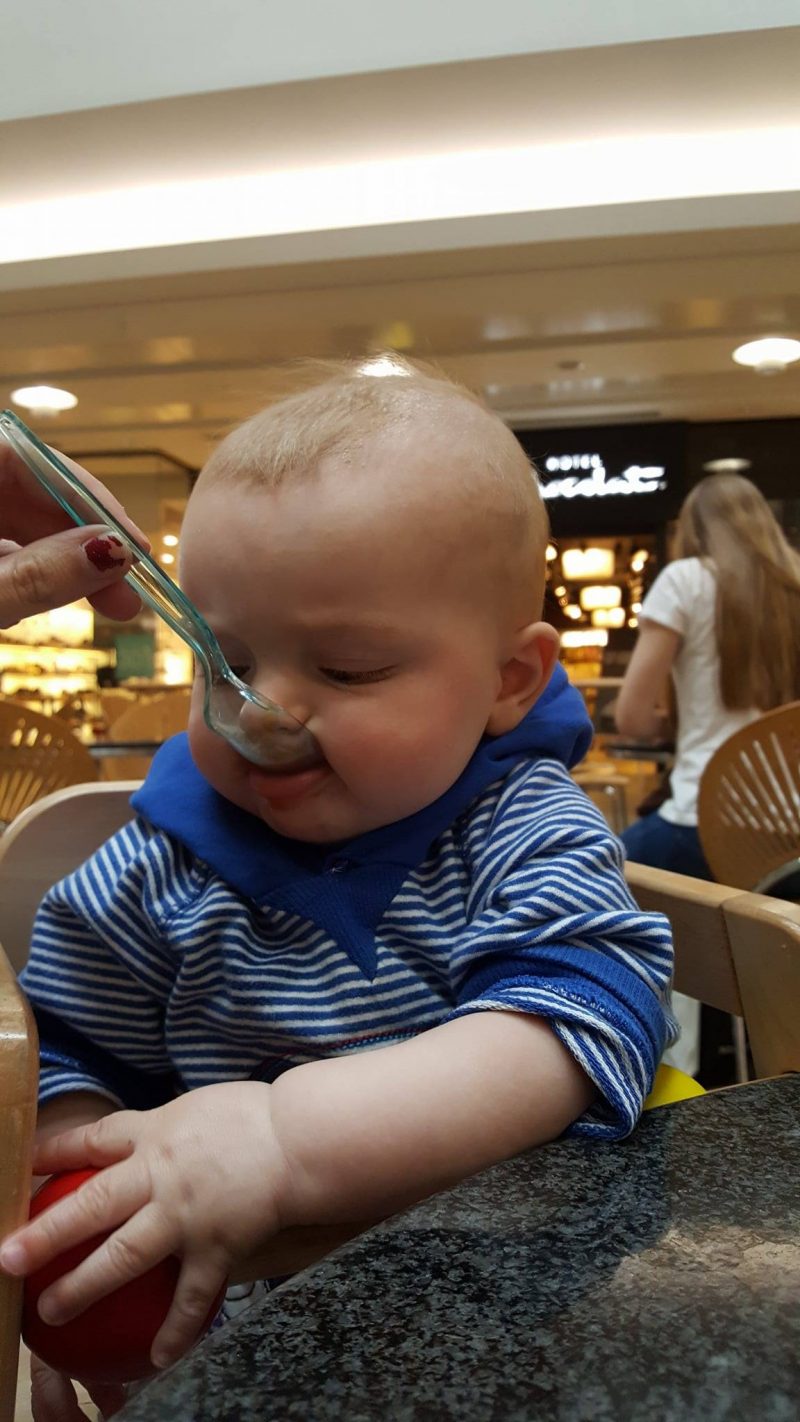 Weaning: If you read my post about weaning Alex you will know that I am feeling pretty clueless and am totally winging it (again). I have just forgotten everything and this horrible anxiety I have developed since having Alex has left me a  nervous wreck, every time he’s eating I’m worried he’s going to choke. I have got better as the month has gone on though and Alex has been enjoying a variety of different foods. Favourites are definitely banana, pears, toast and Ella’s kitchen pouches. He is not overly fussed on potato and didn’t enjoy the blended up homemade spag bol one bit. I think Alex is making great progress with his weaning and he really does seem to enjoy his food a lot. 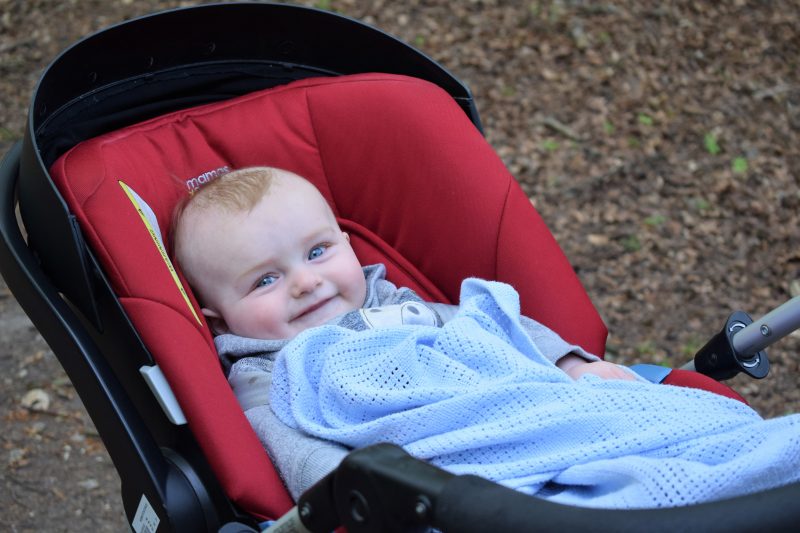 Sleeping: After the hell of the horrible sleep regression Alex went though last month, the last couple weeks have seen Alex starting to sleep through again – yay! Naps are still a bit hit or miss but I have managed to get Alex to have a sleep for an hour or 2 in his cot most mornings by feeding him into a milk drunk coma whilst sat in the dark! I don’t love a strict nap schedule but Alex really is a much happier baby when he has had a good nap in the morning.

Who have we seen.

After our Italy holiday last month we haven’t been as busy on the weekends as usual but we have still seen lots of lovely family. My parents have been to stay this month, as have Oli’s parents and we have spent time with my sister and her children too.

Where have we been.

This month has been a little bit all over the place with Oli having to work late shifts and weekends so we haven’t been off on as many adventures as normal. We have managed tog et out and about a bit locally though and we have had lots of lovely walks in the woods, getting lots of lovely photos with the bluebells and just enjoying the warmer weather. It was mine and Oli’s birthdays in the middle of May so we had a trip out for food in Southampton which was lovely. Unfortunately, we have had to spend another day in hospital this month as Alex contracted bronchiolitis yet again, it didn’t last too long this time though thank god (check my post about Alex’s first admission to hospital if you are unsure of the symptoms of bronchiolitis). 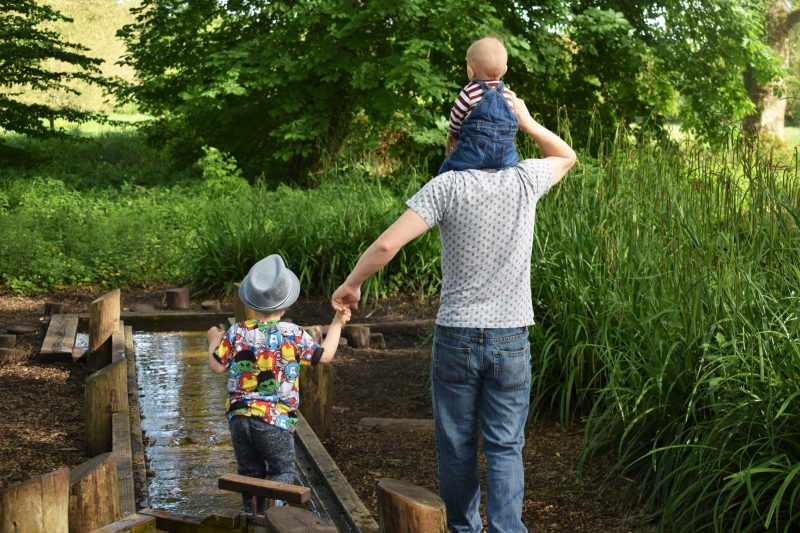 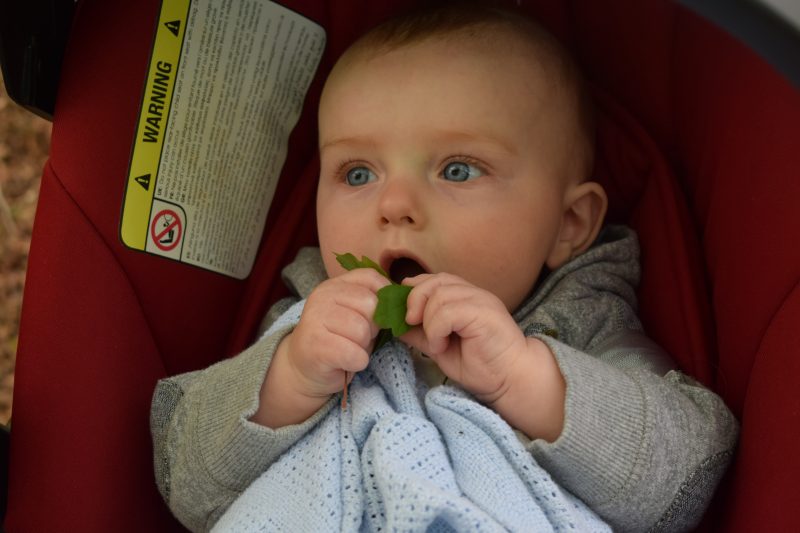 What does Leo think: Oh yes, Leo is absolutely besotted with his brother now, his love just grows as these months go on. Leo often asks to kiss and hug Alex and wants to play with him and he laughs when Alex does something silly and he tells him he will be ok if he starts crying. It is not always perfect though as Leo can still play a bit too rough with Alex sometimes. I must admit I do get cross with him sometimes as I don’t know how many times I am supposed to tell him he needs to be gentle with his brother before it sinks in properly. He doesn’t ever hurt Alex it is just sometimes I can see Alex getting overwhelmed and a bit upset when Alex tries to hug (rugby tackle) him. I 100% know Leo never intentionally tries to hurt his brother, he just loves a little bit too hard sometimes! 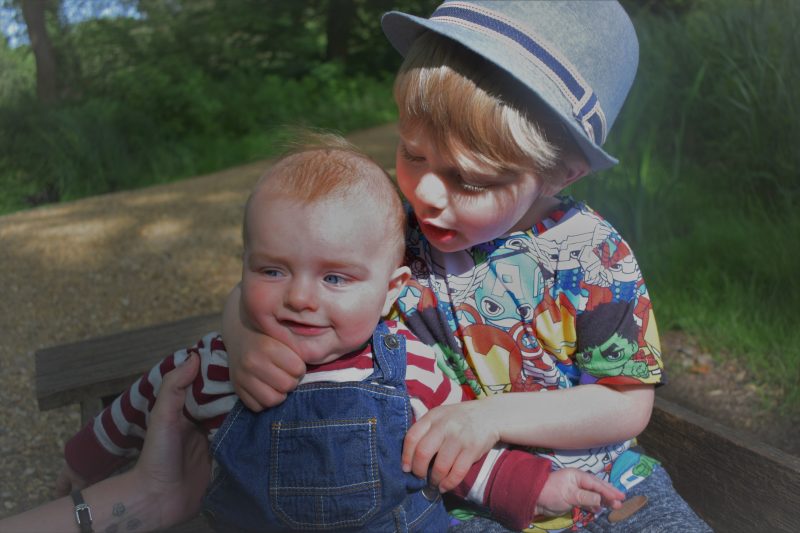 Sibling bonding: These boys of mine are so sweet together most of the time and it melts my heart. Alex laughs at Leo, Leo laughs at Alex, they cuddle each other and Alex seriously can not ever take his eyes of his big brother. Now Alex is on the move they sort of ‘play’ together now and they both share a bath together each night and I just love watching them laugh and splash each other, looking like they are having the best time. There really is nothing I love more in this world than seeing my two boys together. 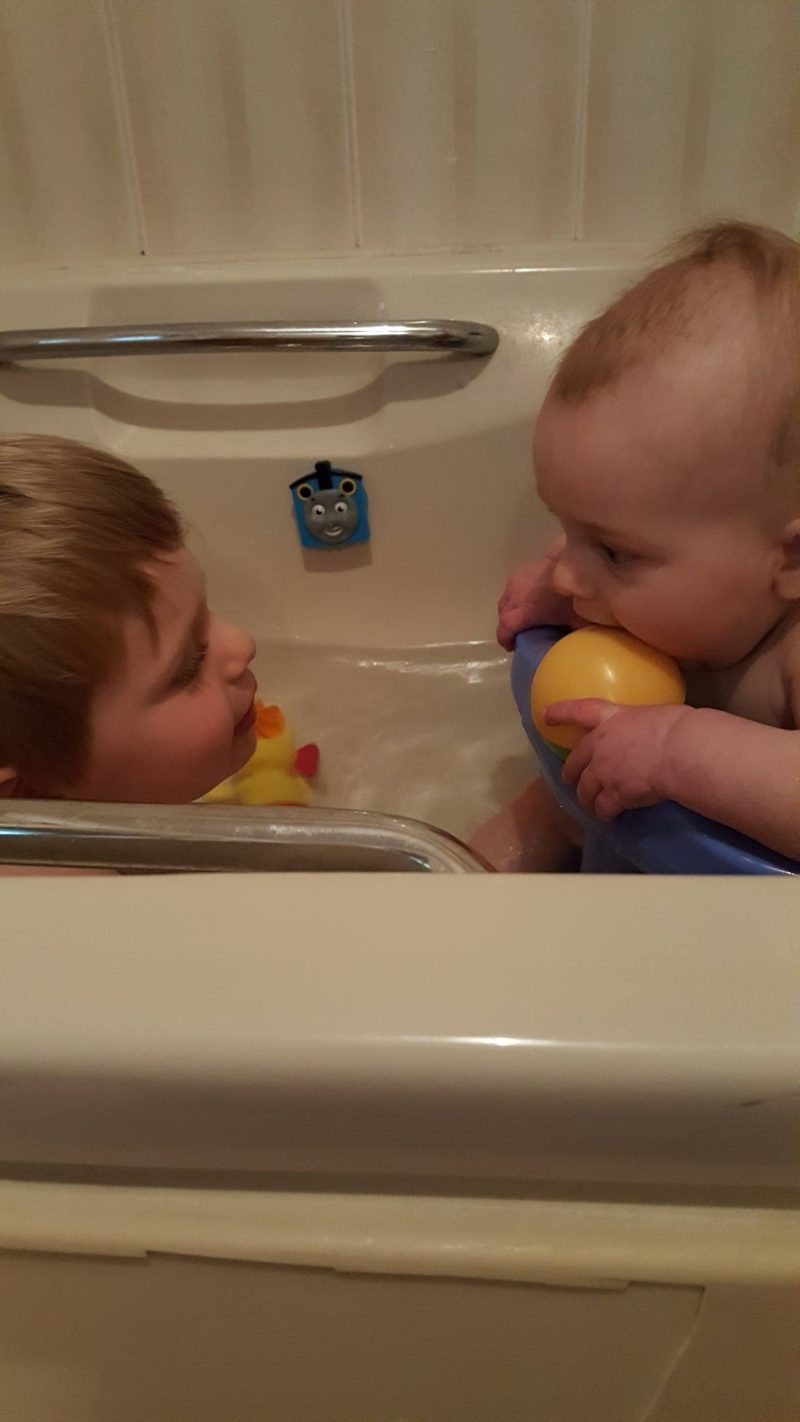 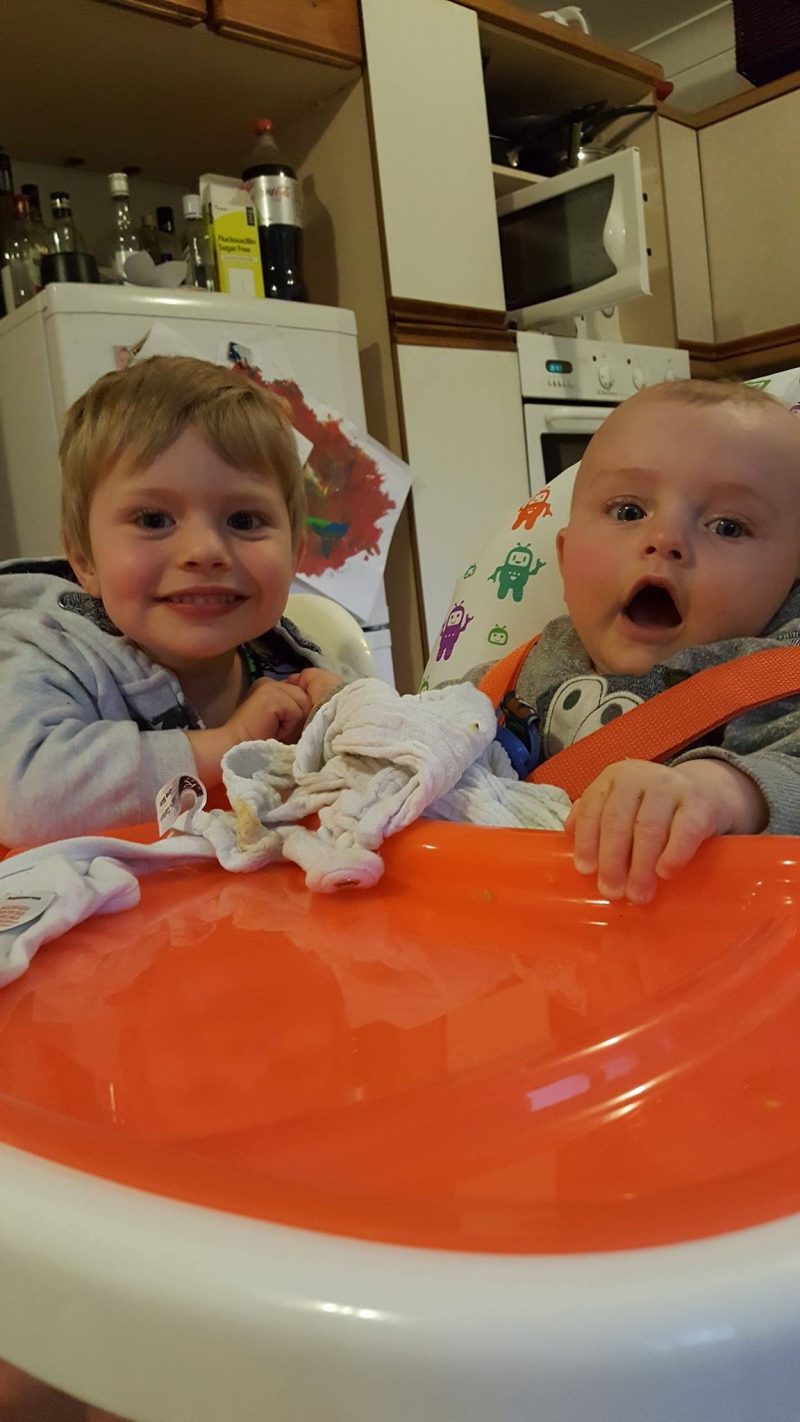 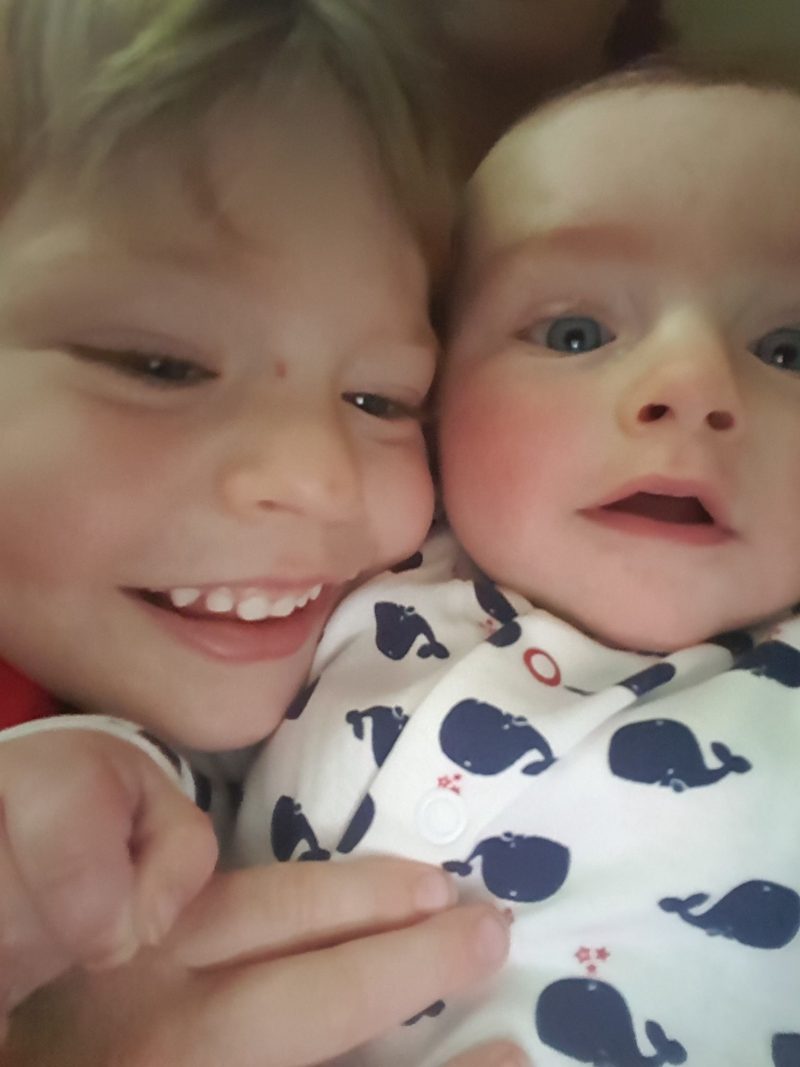 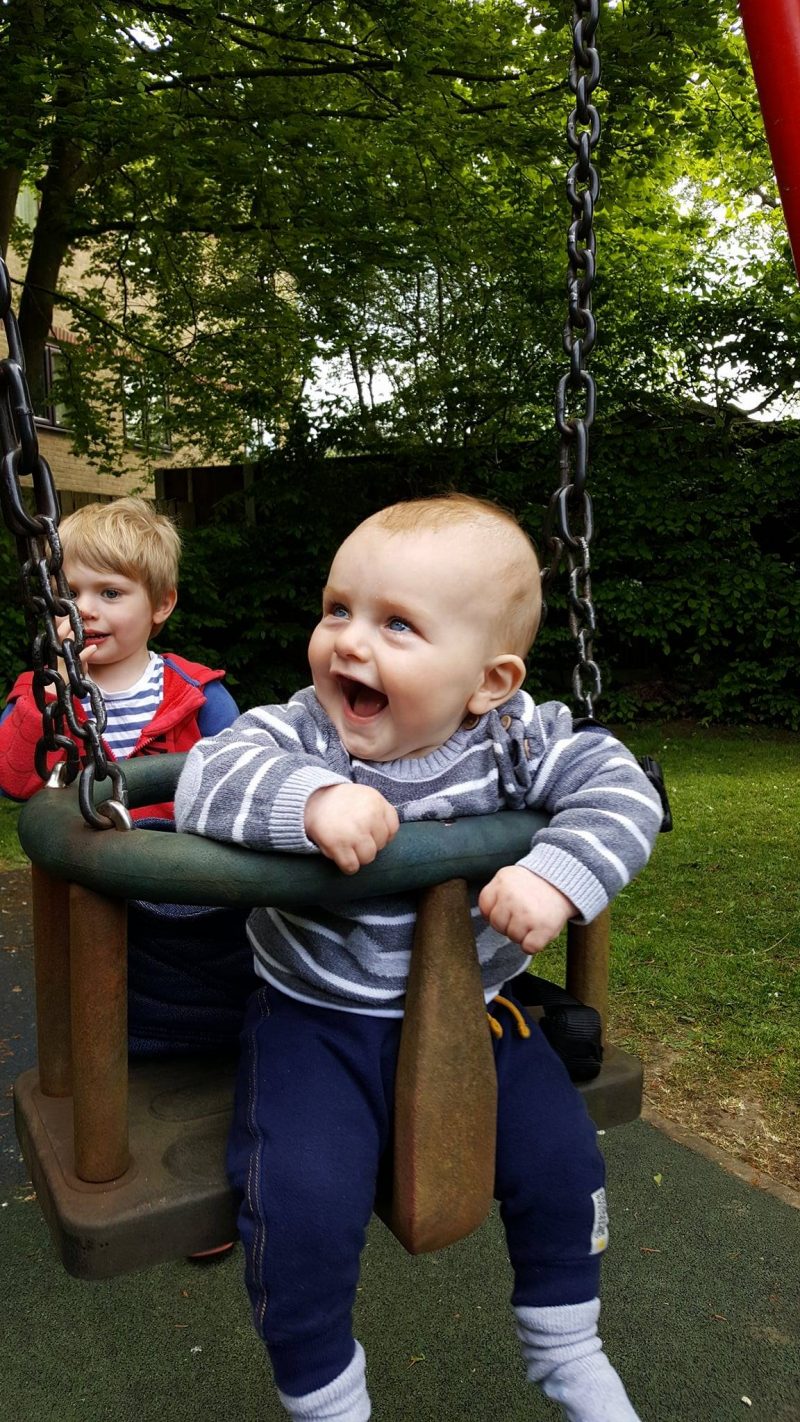 This month has been full of lots of little first and moments I don’t want to forget. 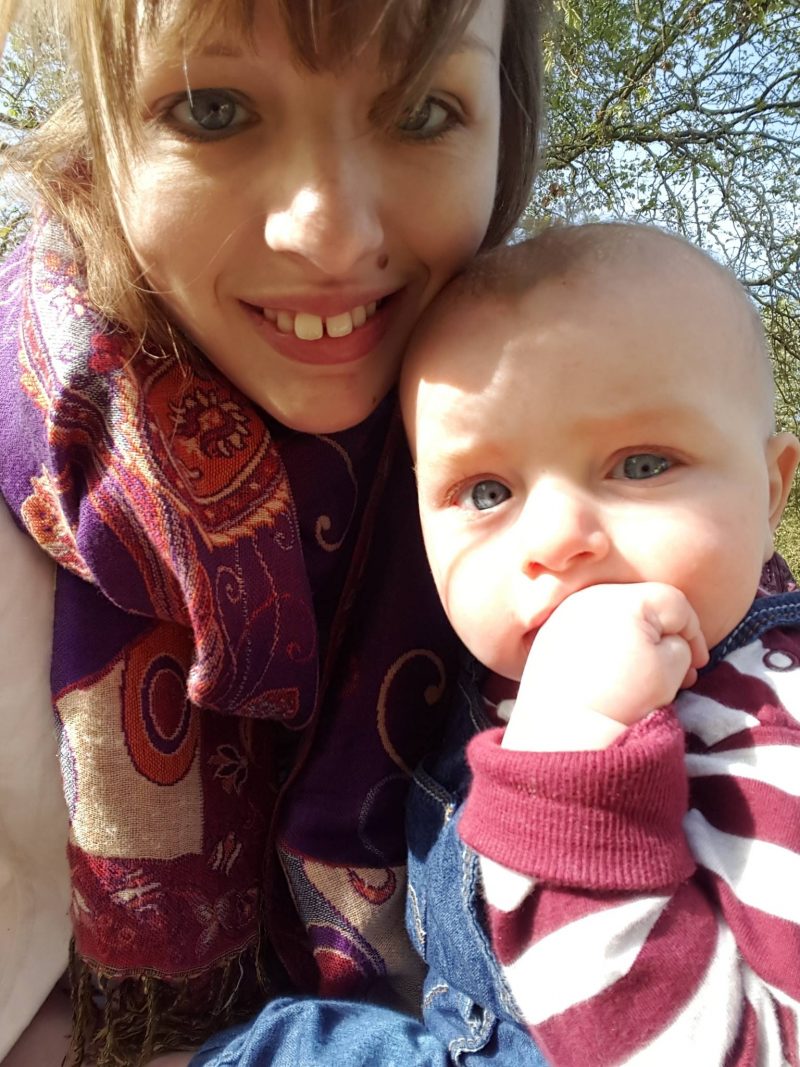 That is it for this months update, Alex is making amazing progress and amazes me every day with just how quickly he is developing. I really wish he would slow down just a little bit though as I feel like he is becoming less of a baby every day.

See you next month for another baby update, if you want to catch up with Alex’s progress from his birth until now you can read all of his baby updates here
You can find this post linked to some of these amazing blog link ups –

How to enjoy the motherhood experience right from the start