If you are a regular reader of Naptime Natter you will know that I am very passionate about raising awareness when it comes to mental health, especially the mental wellbeing of mothers. Today I have a guest post for you from the National Counselling Society, covering the main things we should all know about mental illnesses and what we can do to help society change its attitude towards mental health. I hope you find it useful.

Back in May, this year’s Mental Health Awareness Week took place in the UK, with an emphasis this year on stress, a key trigger for many forms of mental illness. Let’s take a look at some statistics about the nation’s mental health and some ways to start raising awareness about the issues.

Mental health initiative Time to Change have revealed that one in four people experience mental health problems every year and half of those people say that the associated shame and isolation are worse than the conditions themselves. This is especially apparent in the workplace as, according to the Mental Health Foundation, a massive 70 million work days are lost in Britain to mental health problems annually, costing employers an estimated £24 billion. Considering that the problems are so prevalent, it’s very telling that figures also show that in 2017, 38% of Brits worried that revealing these problems to employers would put their jobs at risk. Perhaps this number is less surprising when you take into account that the same study showed that 11% of participants reported suffering abuse in the workplace as a result of their mental health issues.

But it is not only the workplace where mental health issues are causing people serious problems as the majority of these illnesses begin during childhood. Indeed, 75% start before a person reaches their 18th birthday, and a further 75% of those children are not receiving treatment as the symptoms are not being picked up on by teachers or caregivers. These figures show that there is still a great level of misunderstanding about mental health – it is still seen as something different to be feared and, in worst case scenarios, shunned or mocked. Not only are mental health problems not being tackled enough generally in the public eye, but also by the government and medical sector; only 6% of health research funding goes towards mental health in the UK.

What are mental illnesses?

There is a wide range of mental health issues and anyone can be affected by them at any time. They alter a person’s thinking, behaviour and mood as well as how they relate to other people and function during day-to-day life. They include, but are certainly not restricted to, stress, anxiety, post-traumatic stress disorder (PTSD), bipolar disorder, borderline personality disorder, eating disorders, schizophrenia, self-harm and feelings of suicide. Here is a quick definition of some of the more common terms:

Depression and anxiety are the most common mental health disorders in the UK, affecting 7.8% of people. A person suffering with depression will be troubled by prolonged feelings of helplessness, guilt, low self-esteem, anxiety, hopelessness and a loss of pleasure. Anxiety is the fear of a perceived threat in the future or at the present time.

Schizophrenia affects at least 26 million people across the globe. During an episode of schizophrenia, a person can have a disrupted understanding about the world around them, caused by delusions, hallucinations and irrational beliefs that can be very frightening.

Eating Disorders, such as anorexia nervosa and bulimia nervosa, affect up to 750,000 people in the UK. Sufferers engage in behaviours that disturb their diet and attitudes towards food as a way to control their problems. Anorexia has the highest mortality rate of any mental illness due to medical complications caused by maintaining a dangerously low weight.

Bipolar Disorder is characterised by radical mood changes from euphoric highs, where individuals will experience a surge of energy, little need for sleep and possibly delusions of grandiose and loss of judgement, to low moods and depression. One in a hundred adults are thought to be bipolar.

PTSD occurs when traumatic events in an individual’s past leads to flashbacks, panic attacks and anxiety that can have a negative effect of their everyday life.

The good news is that there is a growing trend towards better mental health awareness. Time to Change reported surveys that revealed between the years 2008 and 2014, an estimated 4.1 million people had an improved attitude towards mental health and that the amount of people willing to work with, live with and have a relationship with people affected by mental health conditions rose by 11%.

The most important actions that could help support positive change towards mental health issues are simply talking and listening. Individuals will feel less isolated if they are able to open up to someone about their problems and not feel judged. Once someone has been able to talk about their issues, they may feel better equipped to seek further help in the form of a counsellor or therapist. Society as a whole will also benefit from a greater understanding of the conditions and an awareness of how they can affect people day to day, and how this can be helped. This will lead to fewer work days lost due to mental ill health. A more open attitude will also make it easier to spot children and young people who may be suffering and slipping through the net.

While women have been quicker at embracing a more positive attitude, men have more obstacles to contend with, making them less likely to open up about mental illness. Culturally, being ‘a man’ is often perceived as being ‘strong’ and talking about feelings, indeed having feelings and being affected by stress, anxiety and sadness is often wrongly thought of as being ‘weak’. Encouraging more men to come forward and talk about the issues affecting their lives would be a great step forwards towards chipping away at those obstacles. 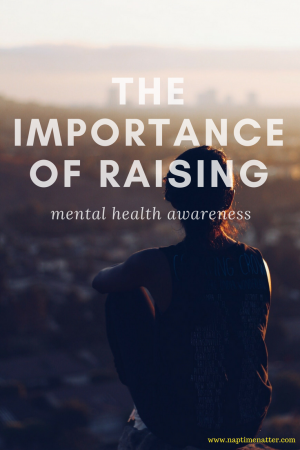