Short stories for mums – We aim to please

Something happened this afternoon that made me stop and question how well I am actually doing at teaching my four year old about life. I am always trying to educate and encourage good morals and values in my children, I want them to grow up into kind and respectful adults and I know it’s mine and their dads job to make that happen. I’ve fallen short though, completely unintentionally, I have failed to educate my child about race.

This afternoon Leo was watching Go Jetters after school (that Cbeebies programme with the theme tune that gets stuck in your head for days) and he made a comment about one of the characters. This is how our conversation unfolded –

Me: Yup, he is. What do you think about that?

Leo: I think it makes him weird.

Me: (slightly horrified) Why?! Why would the colour of his skin make him weird?

Leo: Because he looks different and that’s weird.

Me: (despairing to myself) Different doesn’t mean weird. You have blonde hair and mine is brown, does that mean I’m weird?

Me: Our eyes are blue but some people’s are green, does that make them weird?

Me: So, the little boy in your class who has brown skin, what do you think of him?

Leo: Because he looks weird.

Ahh! It’s safe to say by the end of the conversation I was trying to calm down the voice in my head that was telling me I am raising a racist child. Obviously this isn’t the case, Leo is only four and just starting to really get a grasp of the world and all the people that live in it but I can’t help but wonder where this assumption that people who look different are weird has come from? I have certainly never said anything like that, neither has his Dad or any of our friends and family as far as I am aware. Has he heard something at school or is it just him starting to notice these sort of differences and just assuming different means something negative?

I have to admit, my friendship group isn’t very diverse. I can count on one hand the amount of friends I have who are not white and British, that’s not because I have any issue with those who aren’t, it’s just how it is. My family are all white and British, as are Oli’s and Leo has never really been around anyone from a different ethnic background before. We don’t really have conversations about race and that isn’t because I have been avoiding the topic, it is just up until recently I haven’t really had any reason to bring it up. I hope what I am about to say doesn’t get misconstrued or offend anyone but race is such a non issue for me, I mean that in the nicest way possible. I will treat everyone the same, I like or dislike you because of your personality, the colour of your skin does not play even the smallest role in how I form an opinion of someone. I have been foolish though, just because I see everyone on this earth as ‘human’ and not white/black/Asian etc doesn’t mean I don’t still need to teach my children to share this same outlook.

I’ve not been burying my head in the sand about this somewhat hard to explain life lesson, I have just been ignorant to how important it is to have these conversations even with very young children. I would be absolutely mortified if I picked Leo up from school tomorrow and his teacher told me he had called one of his classmates weird, purely because their skin is a different colour to his. I told Leo he is never to be nasty to someone just because they look different and he says he understands but it just worries me that those thoughts that different skin = weird were even there in the first place.

Trying to navigate the often highly emotive and easily misconstrued conversations around race can be really difficult, even when you are trying to talk about it with other adults. so trying to teach a four year old about it isn’t always as easy as using an analogy about different hair and eye colours. I turned to the blogging world for advice on how to talk to your children about race and here is a list of their really useful tips.

How to talk to your child about race.

Hold you arm up next to your child’s and point out that no skin tones are the same colour, some are darker some are fairer but everyone is beautiful and worthy of respect.  – A Slummy Mummy

Print off images of different faces and make up stories with 2 or 3 at a time where the people are saving / helping / educating him. Magical etc. So he learns to see and value the person and not just the face. – Our altered life

Read lots of books with a range of people ages/abilities/ethnicities, sexual orientation etc and in so doing show your child the huge beautiful diversity of the people who populate our world. – Simple parenting

I have had a chat with my eldest about this in the past. I have explained that people come in all different shapes, sizes and colours, but underneath it we are all human, & it’s personality that counts. I am trying to reinforce this in relation to awareness of any physical difference so that my kids understand that it’s not about what you look like, but who you are and how you behave.  – The Mum Conundrum

We’ve been reading the Oliver Jeffers book ‘Here We Are’ its a beautiful book with a beautifully simple message about how everyone looks different and sounds different but we are all people living on one tiny planet so we need look after each other and the planet. – Sinead Latham

My son shouted out ‘look at that black man’ on the train when he was 3. I had a big chat with him about how he wouldn’t feel comfortable with being made to feel different by him pointing out something that doesn’t need to be pointed out. Skin colour is just that and it makes people no different to us so that we have to point them out as different. He hasn’t done it since and when he talks about his coloured friends now he honestly sees them as no different to him. I stress that we must treat everyone as an equal no matter what their colour and that their race and colour doesn’t make them different as we are all human beings. – Our bucket list lives

Its really tricky to get the terminology right as what is and isn’t acceptable changes all the time. I have used the term mixed race to explain how HE (my three year old) can describe someone if he is talking about them to me and I make a big point of making sure we talk about similarities– lots of things we have the same as well as things that are different. – Arthur Wears

There are so many really good tips here, I am definitely going to start having more conversations about race with Leo and I would love for him to get to the point where he sees each and everyone of us as human and deserving of the same love, respect and treatment as people who have white skin like him. Go Jetters may be a seriously annoying TV show but it has helped me see that I need to start talking about the big issues with my little one and, for that reason, I will always be thankful to Grand Master Glitch.

Do you have conversations with your children about race? Got any advice you would like to share for parents like me whose children have started to notice that we don’t all look the same? Please share your thoughts in the comments. 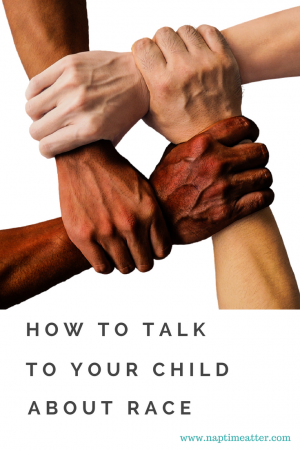 7 things you can try to settle your crying baby