Once upon a time there was a young(ish) woman. She was married to her best friend and together they had two beautiful sons. Her husband had a very important job that took him away from her and their boys for over 40 hours a week. His job was demanding and sometimes stressful and he often came home tired and agitated after a busy day at work.

Whilst her husband was at the office earning the big bucks, the young(ish) woman stayed at home and did nothing. When the baby woke crying for her in the morning she just pulled the covers over her head and pretended not to hear. When their 4 year old son woke up ravenous and demanded breakfast appear in front of him like magic, she would just point him in the direction of the kitchen and sit on the sofa watching trashy tv instead. As the hours passed she would just do whatever she wanted and let the kids run feral around the house, too engrossed in scrolling through Facebook to really interact with her children at all.

Or so her very busy husband and the rest of the world sometimes thought, anyway.

At the end of the day her husband would come home after another 8 hours of non stop graft. He was always hungry but there was never any food in the fridge, let alone a meal actually cooking in the oven. He would grumpily have to go to the shop and buy food before sulking off to the kitchen to cook dinner for the four of them. He was angry that his wife did nothing all day while he worked hard to support them. He told her she didn’t do enough, that she needed to do more, that the house was a disgrace and he was fed up of it.

The very busy husband and  the rest of the world were wrong though. So. Very. Wrong.

The young(ish) woman woke every morning to cries from her baby. She would drag her tired body out of bed, retrieve the baby from his cot, change his nappy and give him some milk from her magic boobs. Then, when the four year old woke up demanding breakfast she would take him downstairs, give him his food and then spend the next half hour encouraging him to actually eat it.

After wrestling clothes on to the baby and helping the four year old dress she would then grab a shower herself, if she was lucky. There would be no watching of This Morning or binge watching of Netflix, if the TV did go on it would be for her son to watch Peppa Pig or some equally annoying children’s programme so she could have a reprieve from his demands for 10 minutes.

Her days were not spent doing nothing or living a life of luxury, sitting around being lazy and enjoying her freedom from the evil world of employment. She would read to her sons, play imagination games with them. She would brave trips to the local soft play centre and toddler groups, she even enjoyed doing crafts and baking yummy treats with them too.

During the days sometimes the house got neglected, the cleaned laundry wasn’t always put away and sometimes the dishes from lunch were left to pile up in the sink. The floor could go a week or 2 without seeing a hoover and the toilets weren’t religiously bleached every Sunday. The kitchen was cleaned multiple times a day though, the surfaces anti bac sprayed to within an inch of their life. The food thrown on the floor from the heights of the baby’s high chair was always promptly cleaned up and any spillages of squash were instantly dealt with. The house wasn’t pristine or glistening, it was lived in but it wasn’t dirty. The children didn’t play in filth all day, their bath water wasn’t brown by the time they were finished with it. The house wasn’t perfect but they were happy. 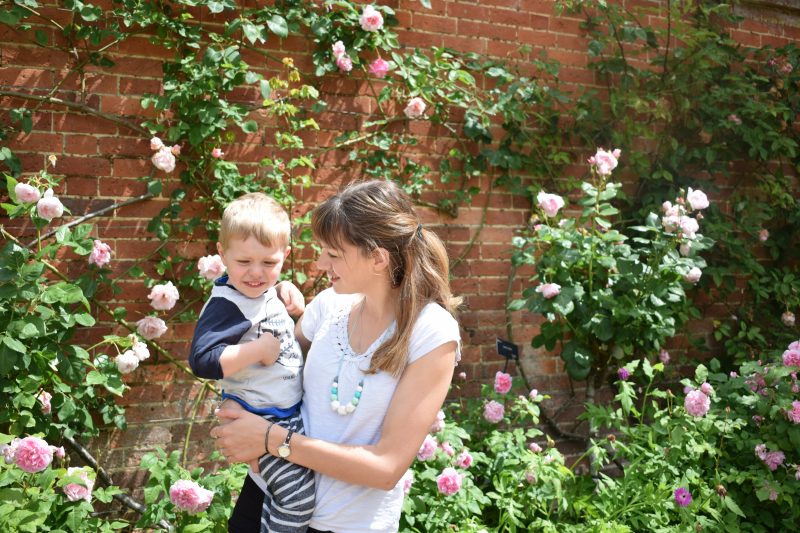 While the very busy husband got to wee in peace at work, have adult conversations and drink his coffee and eat his lunch without little hands trying to steal it, the young(ish) woman was having to wee with a baby sat on her lap and sacrifice her last piece of toast to the ravenous four year old. There were days the only conversation she would have were babbled nonsense with her baby or debates over Paw Patrol with her eldest son. When she was in the company of adults all conversation surrounded the topic of ‘the kids’ and the young(ish) woman was worried all her pre children self would soon be lost forever.

The young(ish) woman would always make sure there was food in the house, she would bravely voyage through Asda with two children in the trolley. While stocking up on healthy food for her brood she would have to pacify a grumpy baby who loved nothing more than to throw his dummy on the dirty shop floor and stop her eldest child having a melt down over that Lego set she refused to buy him. On the days she couldn’t face cooking, her busy husband would take over the culinary reigns, more than happy to hide in the kitchen with youtube for company while she tried every trick in the book to keep the kids happy during the witching hour.

Every day the young(ish) woman was busy raising a family, her hands were either full of cuddly bodies, toys to put away, clothes to be washed or dishes to be cleaned. On the rare occasions the to do list was complete and the children were sleeping or at school she would spend time trying to grow her business. She would busily type away, trying to master working from home so her busy husband didn’t feel the full force of the financial strain. The young(ish) mummy felt like she didn’t ever stop.

On that fateful day that the busy husband came home from work to a messy house and told the young(ish) woman she wasn’t doing enough, the young(ish) woman completely lost her shit. She  told him he had no clue what it was like to feel like you are always cleaning and tidying and yet the house is still a tip at the end of the day. She explained that looking after children all day leaves very little time to get the hoover out or don the rubber gloves and do some deep cleaning. She raged that he dare say she should do more when the baby slept, the one single hour she has every day to try and get some work done and maybe, if she dare, have a cup of coffee that’s actually hot.

The young(ish) woman felt angry and unappreciated as a stay at home mum. She loved her husband dearly but was upset that he could accuse her of not doing enough when some days she barely had time to breathe. Through anger tears fell down her face and the busy husband realised he had over stepped the line. The very busy husband apologised for making her feel unappreciated, he wiped her tears and said sorry.

The young(ish) woman decided to forgive her very busy husband this time. He had never been a stay at home parent so had no idea how difficult and demanding her days at home could be. Ignorance is bliss as they say. The young(ish) woman accepted her husbands apology but warned him that if he were to say anything so stupid again she would hand him over to the wicked witch in the forest who would happily turn him into a toad (or whatever it is that happens to the bad guys in fairy tales).

p.s – Oli if you’re reading, of course I wouldn’t let a witch turn you into a toad. Love you!

How to encourage your child’s creativity