The terrible twos, it is something us parents dread, right? We see kids screaming on the floor, parents carrying them out of shops kicking and screaming and we pray one day that won’t be us. It is inevitable though, one day your baby will turn into a screaming, stomping, patience testing toddler and there’s not a lot you can do to stop it. 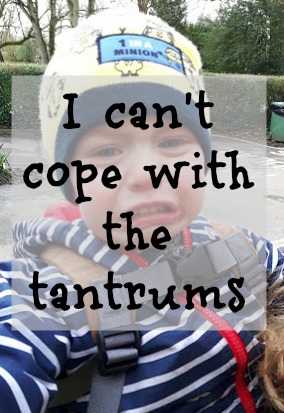 Leo has been having tantrums since he was about 16months old. At the beginning they were easily managed and only proved to be a mere inconvenience but, since he turned two, the tantrums have progressed to a whole different, horrendous, demon-like level.  I know other children have tantrums because I witness them several times a week when we go to toddler groups or when we are out and about. No toddler seems to have the art of the tantrum down quite as well as Leo though. He is the master of the tantrum; if there were such a thing, I would bet everything I own on him coming first in the worst tantrum ever competition.
I love Leo more than anything in the whole world but, my god, that boy tests me and pushes me to the edge more than anyone has before, and probably anyone ever will. He can be the most adorable, loving little boy, showering me with kisses and cuddles, playing silly games and cuddling up for stories. However, when he doesn’t get his own way, is frustrated or angry then things can change pretty damn quickly. I know tantrums are a part of his development, he is pushing the boundaries to see what he can get away with and craving his independence but sometimes, even though I know this, I just don’t know how to cope.
You see, Leo bites. When he is angry or isn’t getting his own way, he bites himself on the hand. It is never enough to make himself bleed, but enough to leave little teeth marks. Every time he does this I want to cry, I feel like it is my fault. I can’t stand seeing him hurting himself, I know he is doing it for attention or so I will give him his own way, but it still worries me. Biting is clearly his way of processing his frustration and anger but I am still unsure if this is normal toddler behaviour or not? I don’t know how to stop it or even if I should try to. Perhaps he will just grow out of it? Maybe by pleading with him not to bite himself I am simply just adding to the problem?
At toddler group yesterday, just before we left Leo went into full meltdown mode and instead of biting himself, he bit me. I was so shocked and angry, it really hurt. His little teeth clamped down on my arm and there was so no way he was letting go. I had to pull my arm out of his tight, angry jaw and carry him kicking and screaming out to the car. As I was trying to wrestle him into his car seat, amongst the angry screams he lunged forward and went to bite my shoulder. What am I supposed to do when he behaves like this? I shout at him but it makes no difference: he cries, I feel guilty, he apologises but then does it again a few minutes later.
Leo has tantrums at home but they are fairly infrequent, he always saves the really bad ones for when we are out and I have no one there to help me. His behaviour is making me want to stay in more often than I should, safe in the knowledge that if he has a tantrum at least I can put him in his room for a few minutes to calm down. I am still trying to get to know people here in Hampshire but it is so hard when I am always having to diffuse an argument Leo is having with another toddler over a toy or comforting Leo when he crying about, well I am not always sure what he is crying about. I am just feeling a bit overwhelmed at the minute, I just don’t know what to do for the best. I say ‘no’, Leo gets mad. I try to calm him down, he gets frustrated and bites himself. I simply have no clue how to deal with this behaviour and, to be honest, I am fed up with being kicked, hit and, now the new addition, bitten.
I know he is going to have tantrums, it is part of him growing up. What I don’t know is how you are supposed to discipline a child who doesn’t listen to a word you say.
This parenting thing is hard. The good times definitely out weigh the bad but when they are bad, they are really friggin bad.
Does your toddler have really bad tantrums? Do they bite themselves when they are mad? I would be really grateful of any advice you might have.