6 tips for having a stress free flight with a baby

5 ways to look after your skin naturally

How to sort out your finances when raising a baby 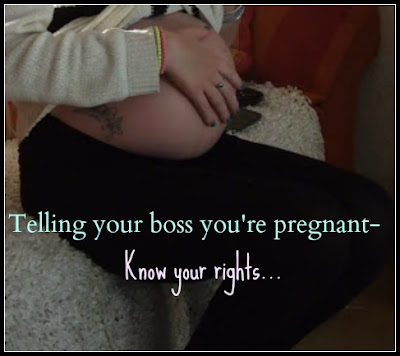 I don’t know about you but when I was pregnant I worried about every little thing. Should I be eating this? Am I exercising enough? Have I bought enough baby grows? Early on in my pregnancy, besides the health of my growing baby, the thing I worried about the most was telling my boss the good news. I was new to my job and was nervous about telling my new boss I was pregnant as I was yet to feel like a fully established member of staff, I was very much still the new girl.

My 12 week scan was rapidly approaching and I knew it would soon be time to tell my employer about the pregnancy, I wasn’t going to be able to hide it forever. The day after my scan I decided to tell her, I convinced myself I was stressing over nothing. Yes I was new but I was doing well in my work and we seemed to have a good relationship, surely I had nothing to worry about.

Unfortunately, I was right to be so concerned.

I was not greeted with congratulations and well wishes, instead I was told it was very likely my employment would be terminated as my boss wanted someone who was fully committed to the business, I had every intention of working up until the very last few weeks of pregnancy and planned to only take 6 months maternity leave, it was my first job after university and I was eager to make it work. I was never able to prove what the business meant to me, the following week I was told the job was no longer mine.

3 moths pregnant and unemployed. Not exactly the ideal situation.

Friends and family told me it wasn’t fair – ‘she can’t do that?’ , ‘is that even legal?’. As it turns out, no it is not legal. My not so lovely boss had breached discrimination laws set out in the Equality and Employment rights acts. A quick phone call with citizen advice bureau revealed what happened to me was not just illegal but I also had a strong case for compensation.

This is not what I wanted when I first found out I was expecting. I wanted my boss to be OK with it and to have my job waiting for me when I came back from maternity leave. I did not want to be dealing with a solicitor and a messy compensation case up until the time I was 8 months pregnant. I did not want to have to read my now ex employers defence statement, full of lies, painting me as an incompetent employee, when in fact I worked hard every single day.

We don’t always get what we want though, do we?

After everything, I only came away with £4000 in compensation. Just over 4 months worth of wages. 4 months I could have still been working for her, by that point I would have been 7 months pregnant and still very capable of sitting at a computer answering emails and making phone calls. This £4000 by no stretch of the imagination covered my loss of earnings, let alone my loss of maternity pay. This was a settlement reached out of court, a trial could have resulted in a much higher payment but could have also resulted in nothing. It all would have depended on how the judge was feeling on the day. 8 months pregnant, extremely hormonal and stressed, I decided to settle out of court. I could not stand to listen to my boss tell the judge her web of lies, so for my health and my baby’s, we took her offer.

Now I am not saying this is going to happen to you or you should try and claim compensation if it does. That decision is up to you. All I am saying is know your rights before you tell your boss about your pregnancy. It is better to be informed, just in case.

As a pregnant employee you have 4 main rights –

If your employer denies you of any of these things then they are breaking the law. Also, you do not have to tell your employer you’re pregnant as early as I did. If you have a physical job that may put you or your baby’s health at risk you may wish to share the news early on, otherwise you can wait until you are 25 weeks before you tell your employer. How I wish I had waited that long. If I wasn’t such an honest idiot and just invested in some baggy tops, I could have worked an extra 13 weeks. But I didn’t and there is no point looking back now.

Anyway, there is no way I would have swapped spending these 2 years I have had off with Leo for more time working for an employer who ultimately, wasn’t that nice or caring anyway.

If you want to find out more about your rights as a pregnant employee, .gov website and citizens advice have lots of useful information.

How did your boss react when you told them you were pregnant? Did you have a similar experience to me? If you are pregnant now and are looking to tell your boss soon, good luck and don’t worry, luckily my story is quite an uncommon one.