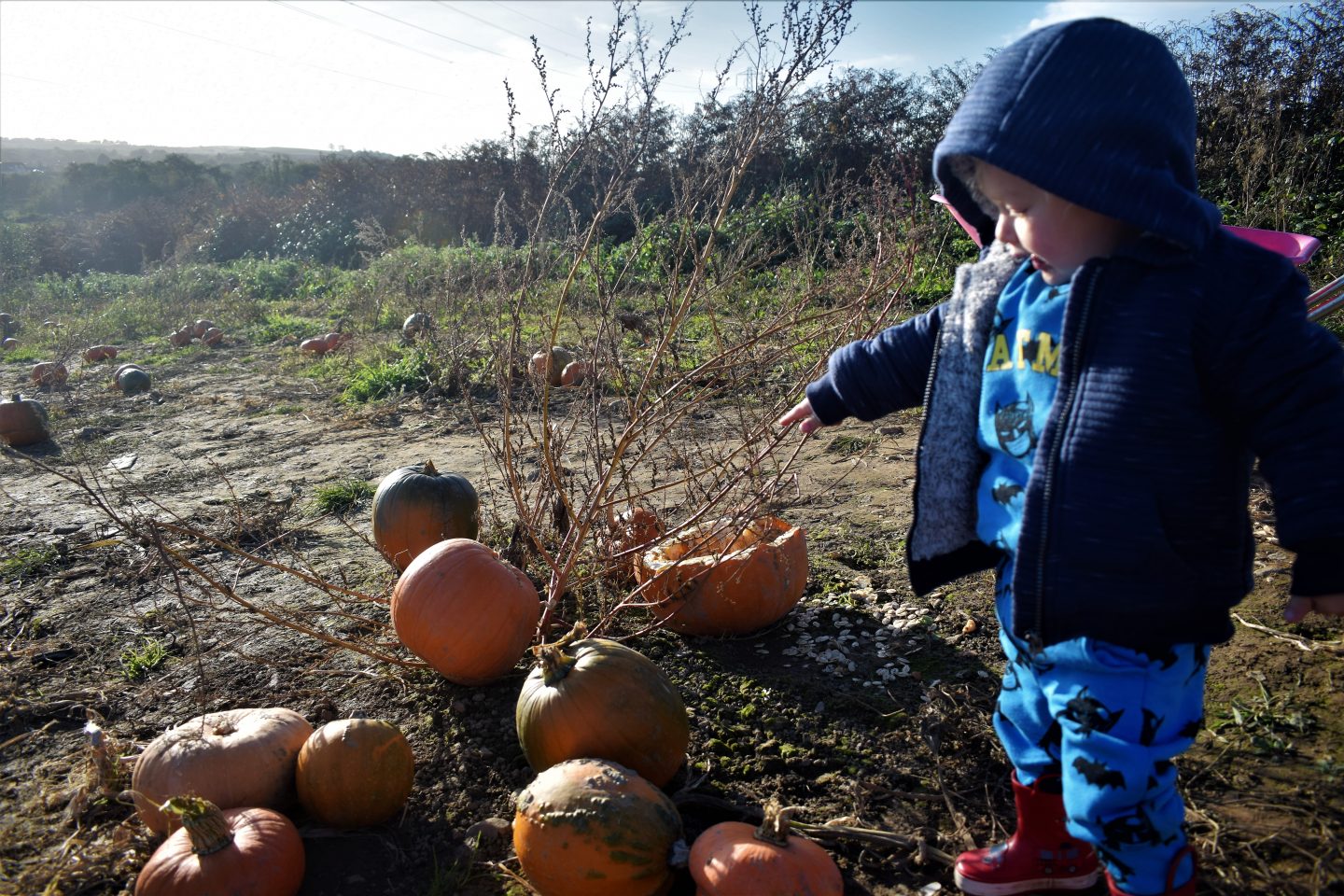 Yay, it’s October! Well, the end of October to be precise. I love this time of year, crunchy leaves, pumpkin spice lattes, chunky knits and the sun sits low in the sky making everything just look that little bit more beautiful and cosy. You know why else I love October? Halloween! Ever since I was 9 months pregnant back in October 2016 and obsessed with finding a pumpkin the same size as my ginormous baby bump, we have been venturing out to a pumpkin patch to pick our own pumpkins for carving. I was a bit worried this year as we have moved back to Wales and I didn’t know where we were going to be able top pick our own pumpkins in Swansea. Penyfodau Fawr Farm came to the rescue though and we headed out there on a sunny afternoon at the beginning of this week to select four pumpkins to carve and decorate ready for Halloween.

Penyfodau Fawr Farm is between Gorweton/Gorseinon and Fforestfach and is easy to find just off one of the small roundabouts. They currently have a massive sign out the front advertising their pick your own pumpkin field so there’s no way you can miss it. The fields opened on the 13th October and will close on the 31st. You can drop by the fields any day between the hours of 9 and 6 and parking is free on site. We arrived around 4 as we left after school and we had no problems getting a parking space or bagging ourselves a bright pink wheelbarrow, ready to fill it with lots of orange pumpkins. 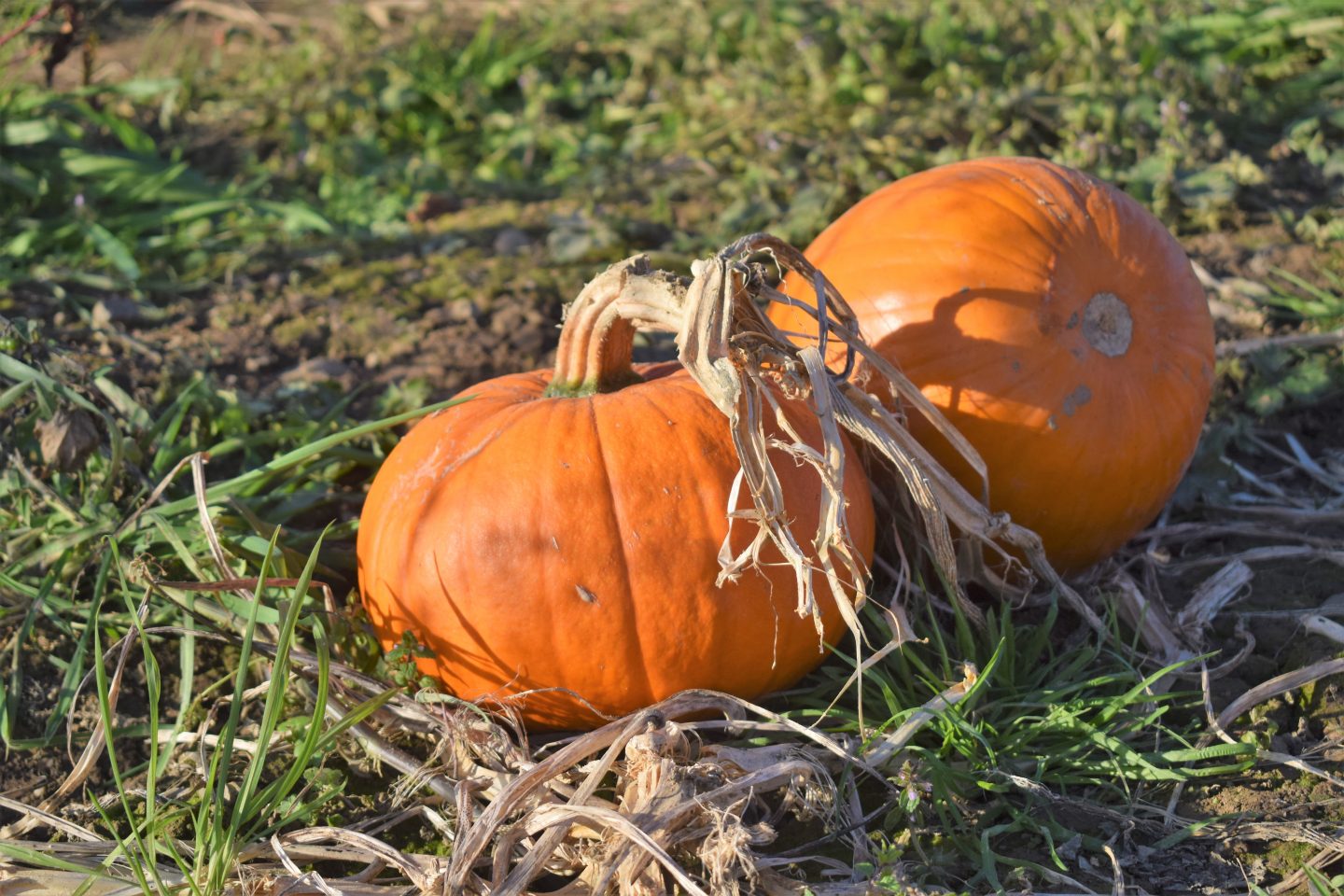 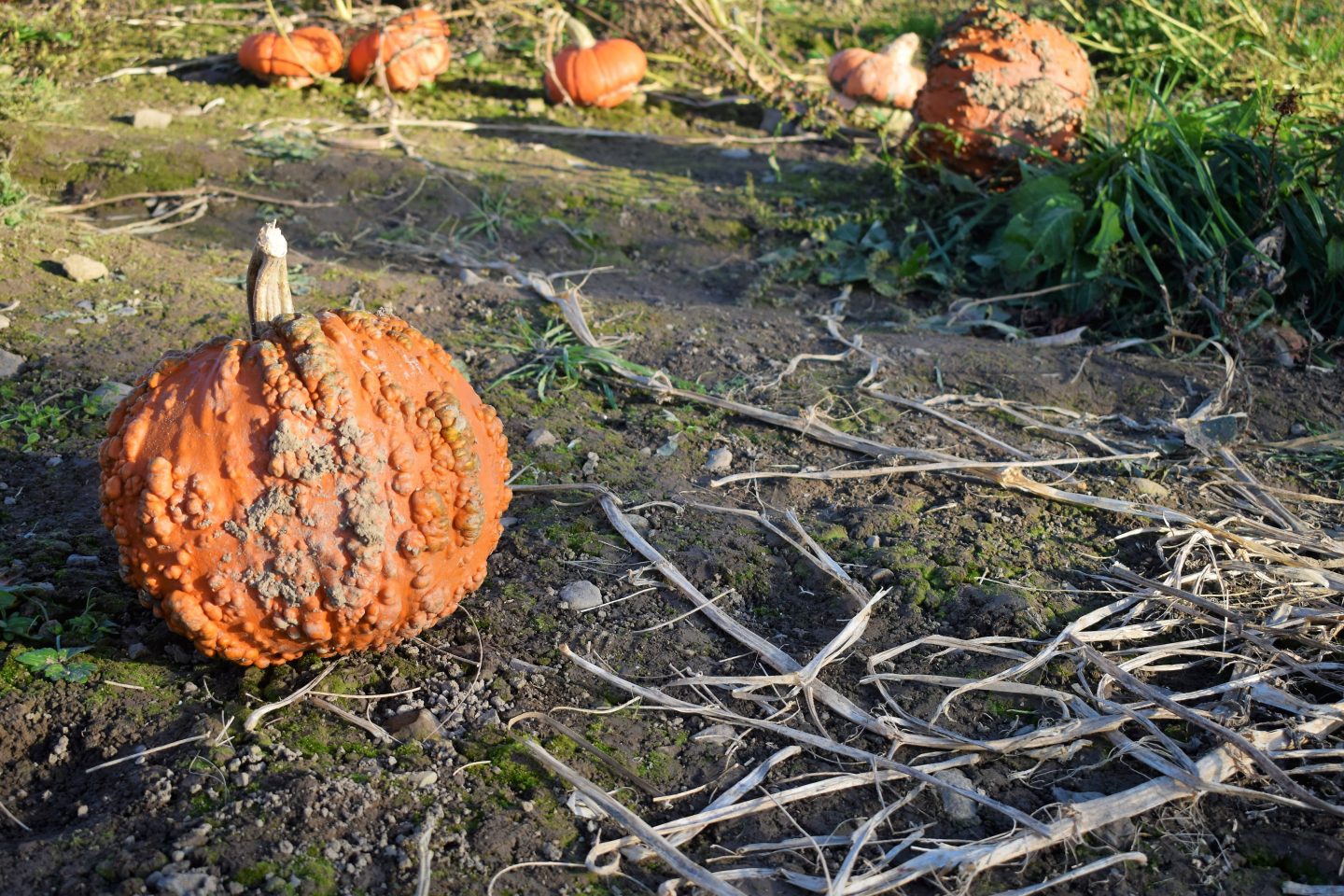 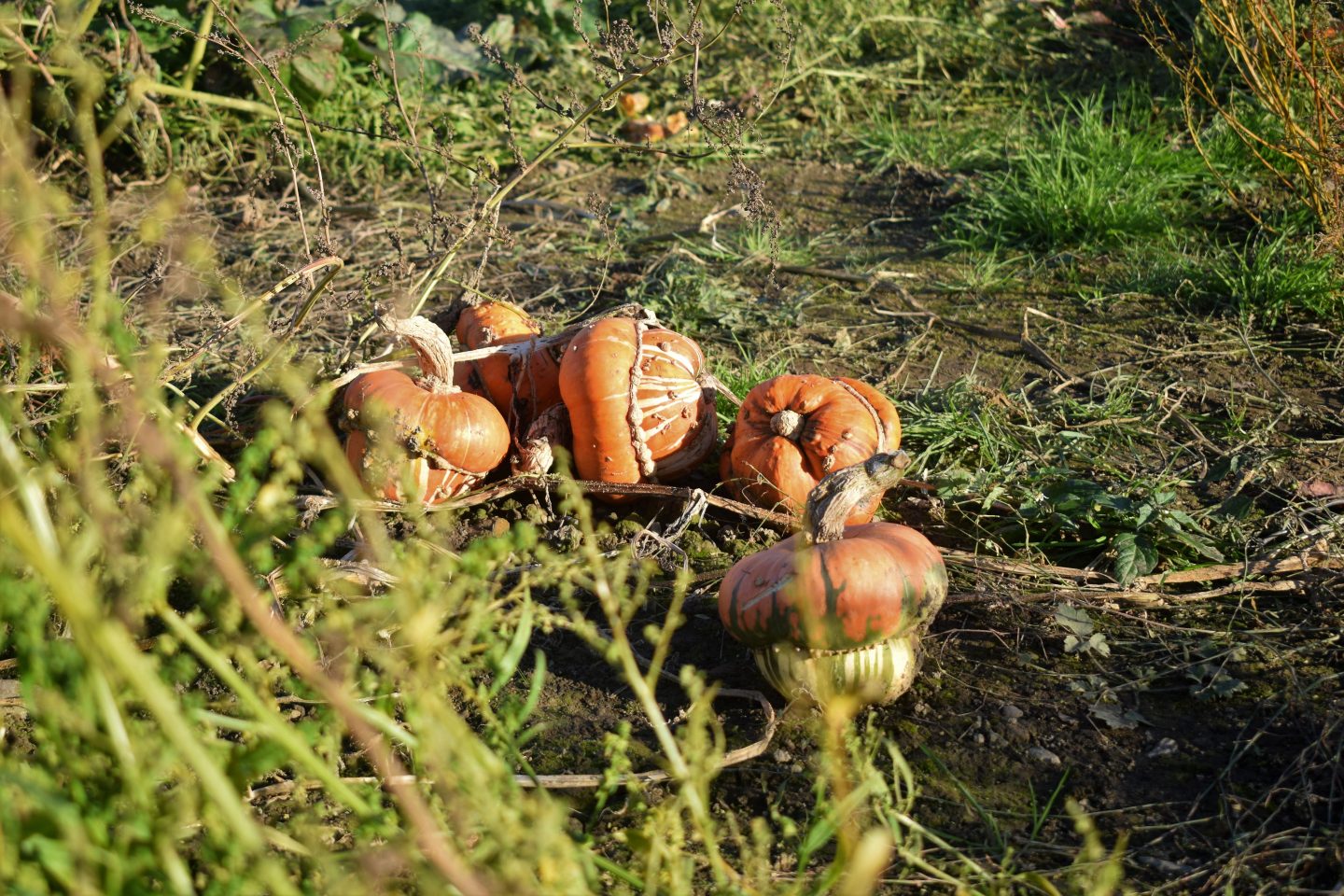 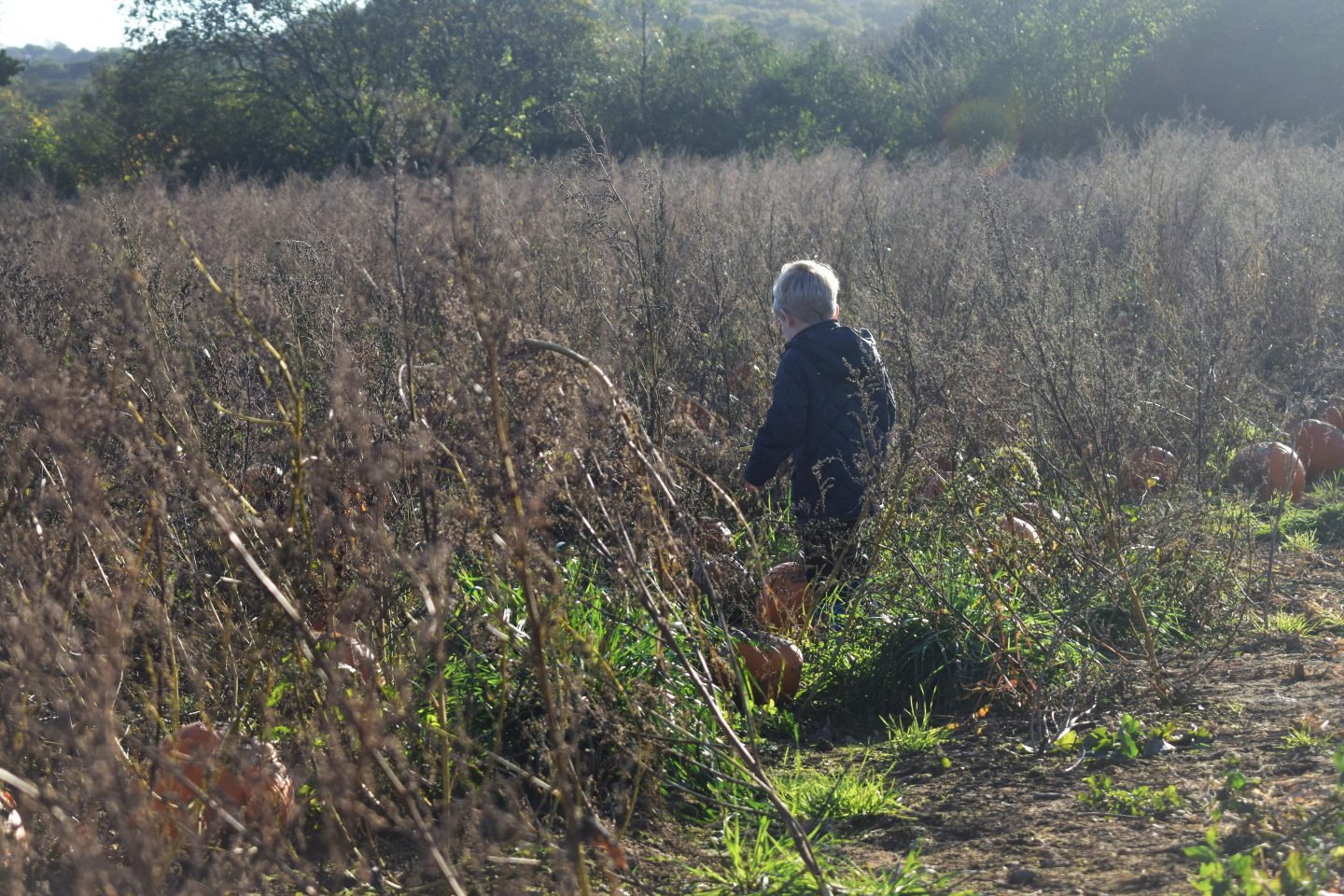 Once we had our wheelbarrow, Alex insisted on sitting in it (typical toddler!) and we headed off towards the pick your own pumpkin fields. There are 3 fields and apparently over 25,000 pumpkins were ready and waiting to be picked when the farm opened to the public on the 13th – that’s a craaaazy amount of pumpkins!

We wondered down to the furthest field, this is our third year of doing pick your own pumpkins as a fun autumn activity and I have never before seen so many pumpkins! The field was splattered in orange, you could hardly push the wheelbarrow for more than ten seconds without nearly running a pumpkin over. 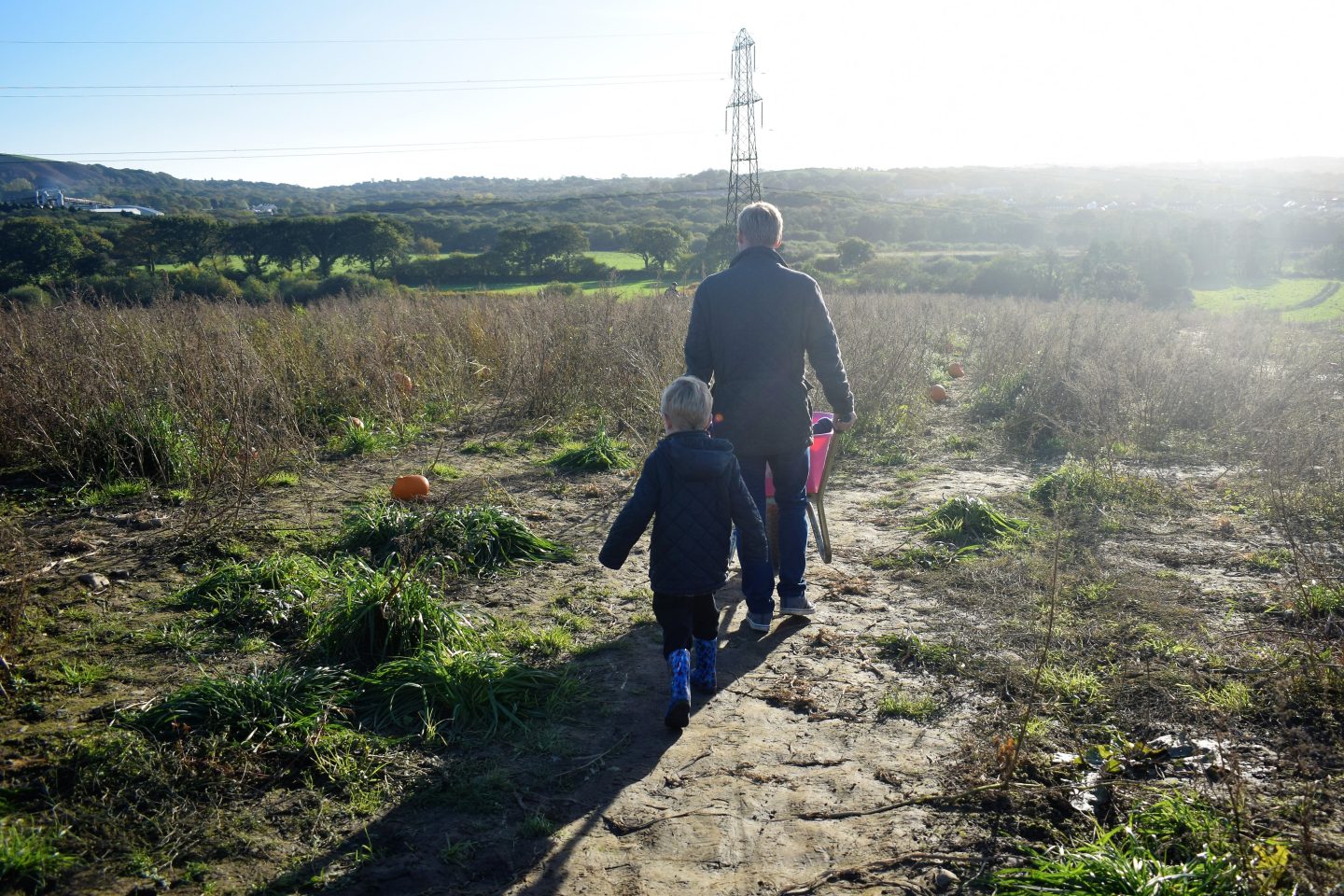 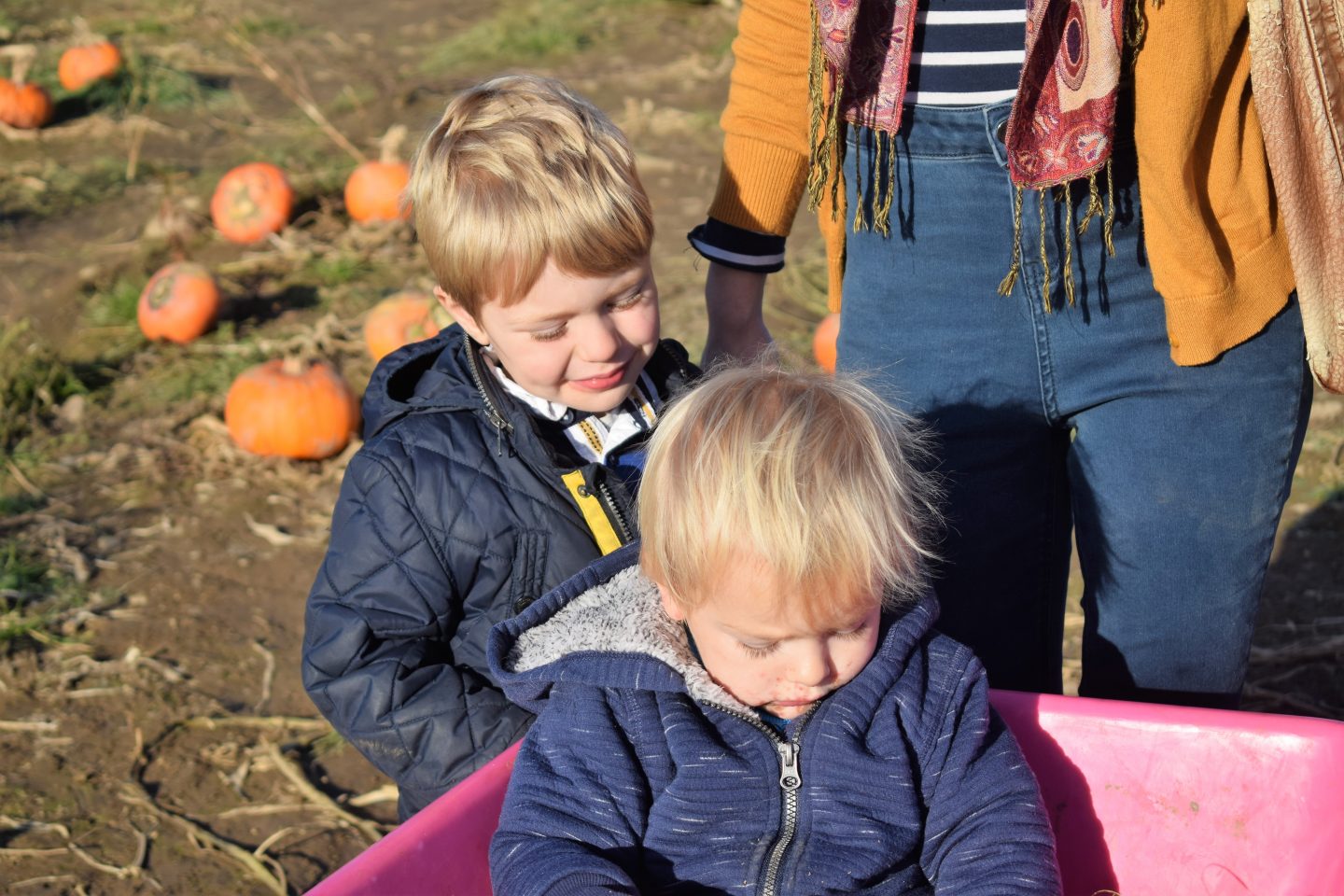 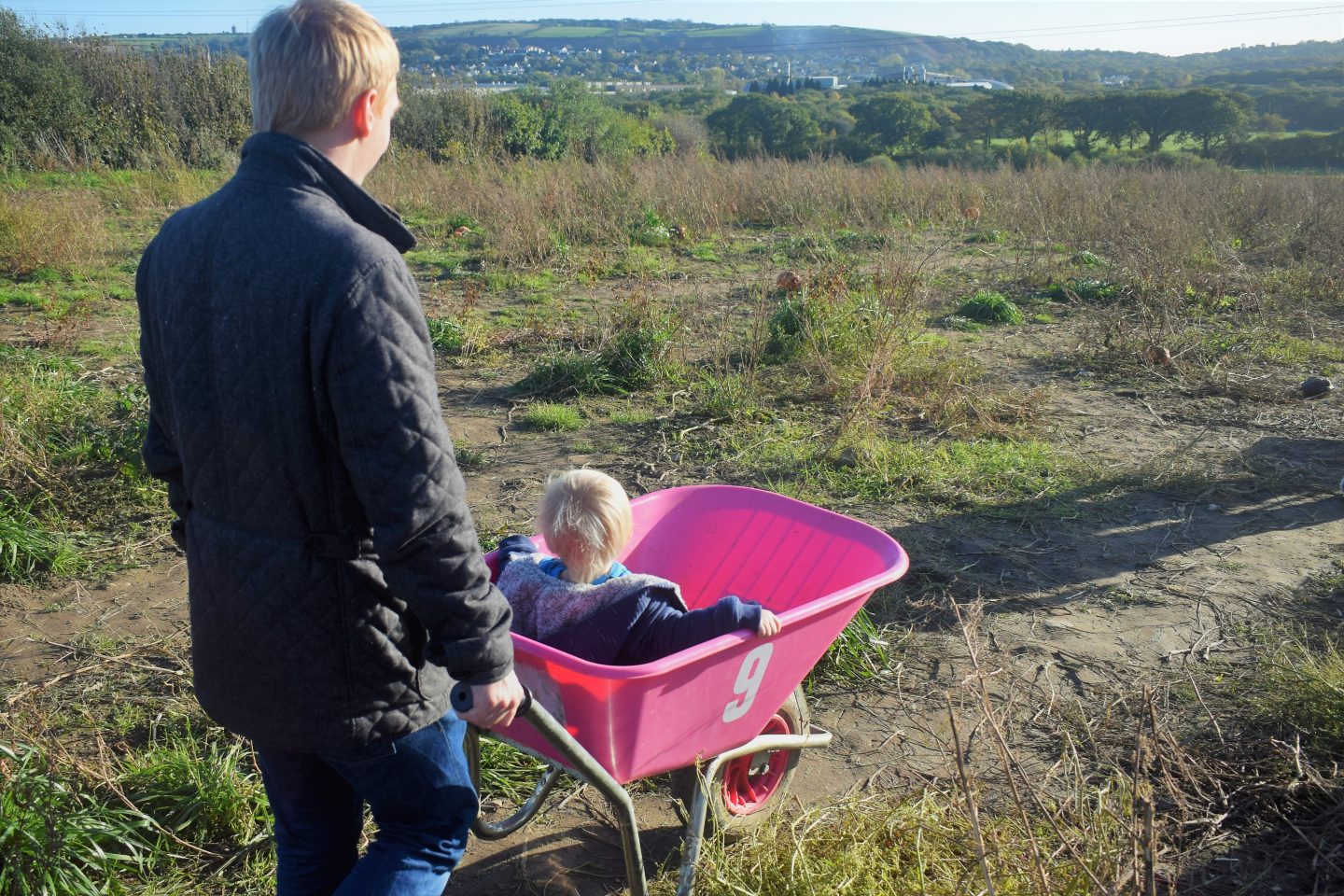 There were big pumpkins, tiny pumpkins, knobbly looking pumpkins, green pumpkins and pumpkins that seemed to be atleast three different colours. The fields are the perfect autumnal setting for a family walk or a photo shoot and as the sun was setting and long shadows were being cast and sunbeams were cutting through the surrounding tress, the place looked simply magical. 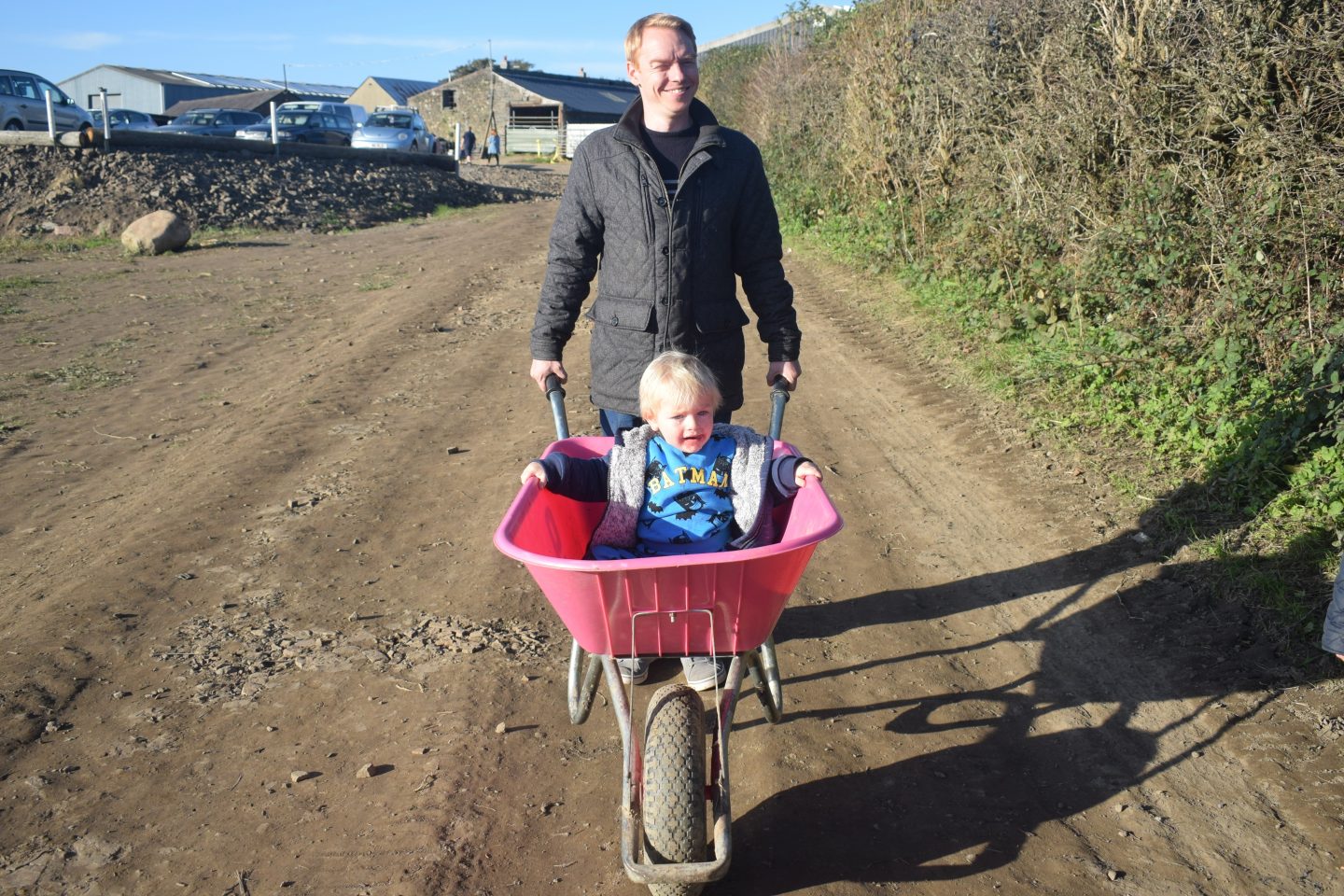 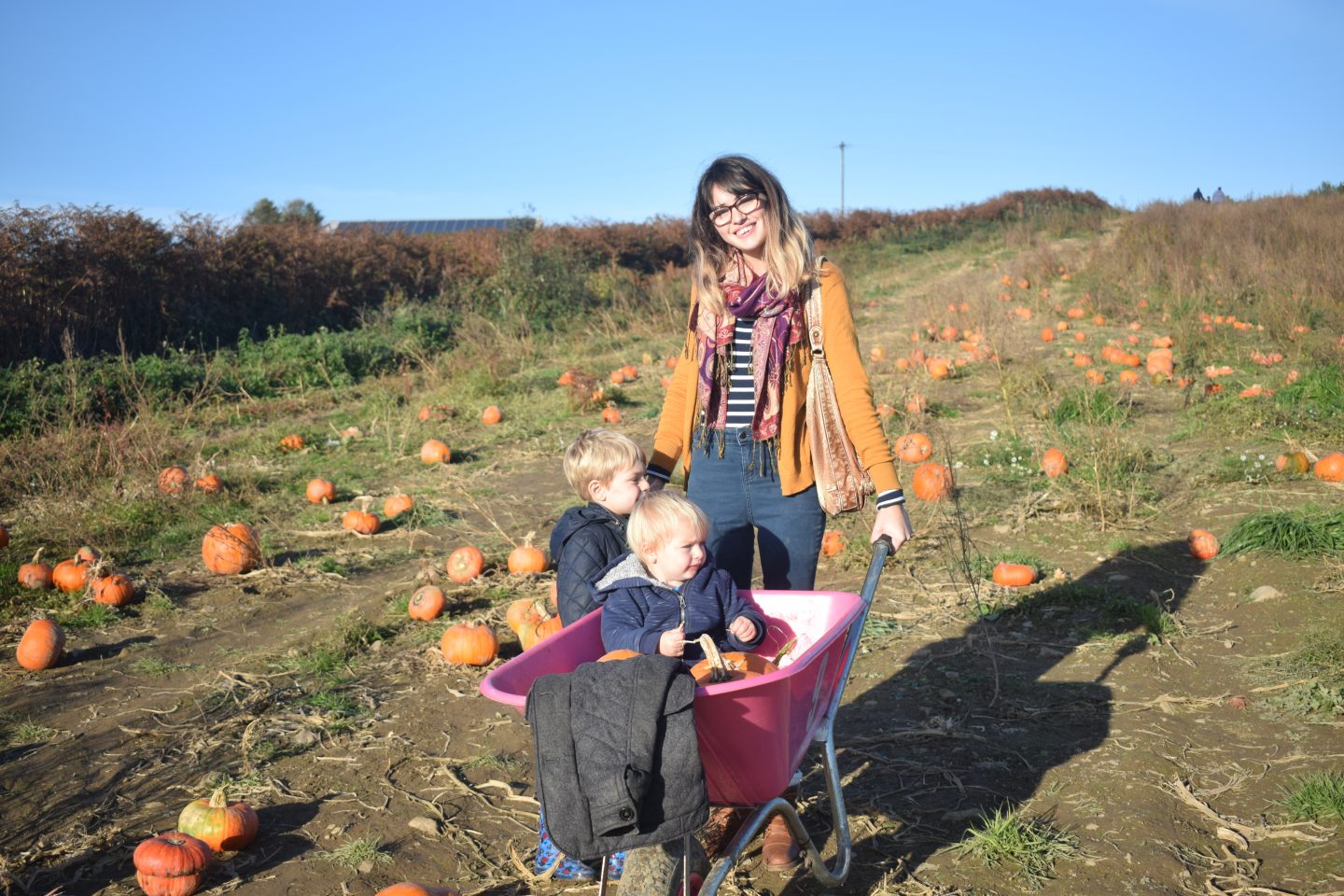 We took our time selecting our pumpkins and Alex enjoyed picking up every pumpkin he could find (we had to sneakily take them out the wheelbarrow when he wasn’t looking). Leo found the knobbly gnarly looking pumpkins hilarious and I really enjoyed studying the ones that were sort of cut in two with their colours, some had white swirls through the orange and they reminded me of Christmas candy canes with an autumnal twist.

Once we picked our pumpkins, we wandered back through the field to the farm shop to pay. We were charged £10 for four pumpkins in various sizes and, although the farm shop does accept card, we paid in cash. They were also selling toffee apples and loads of locally made chutneys and jams but I managed to resist – just! 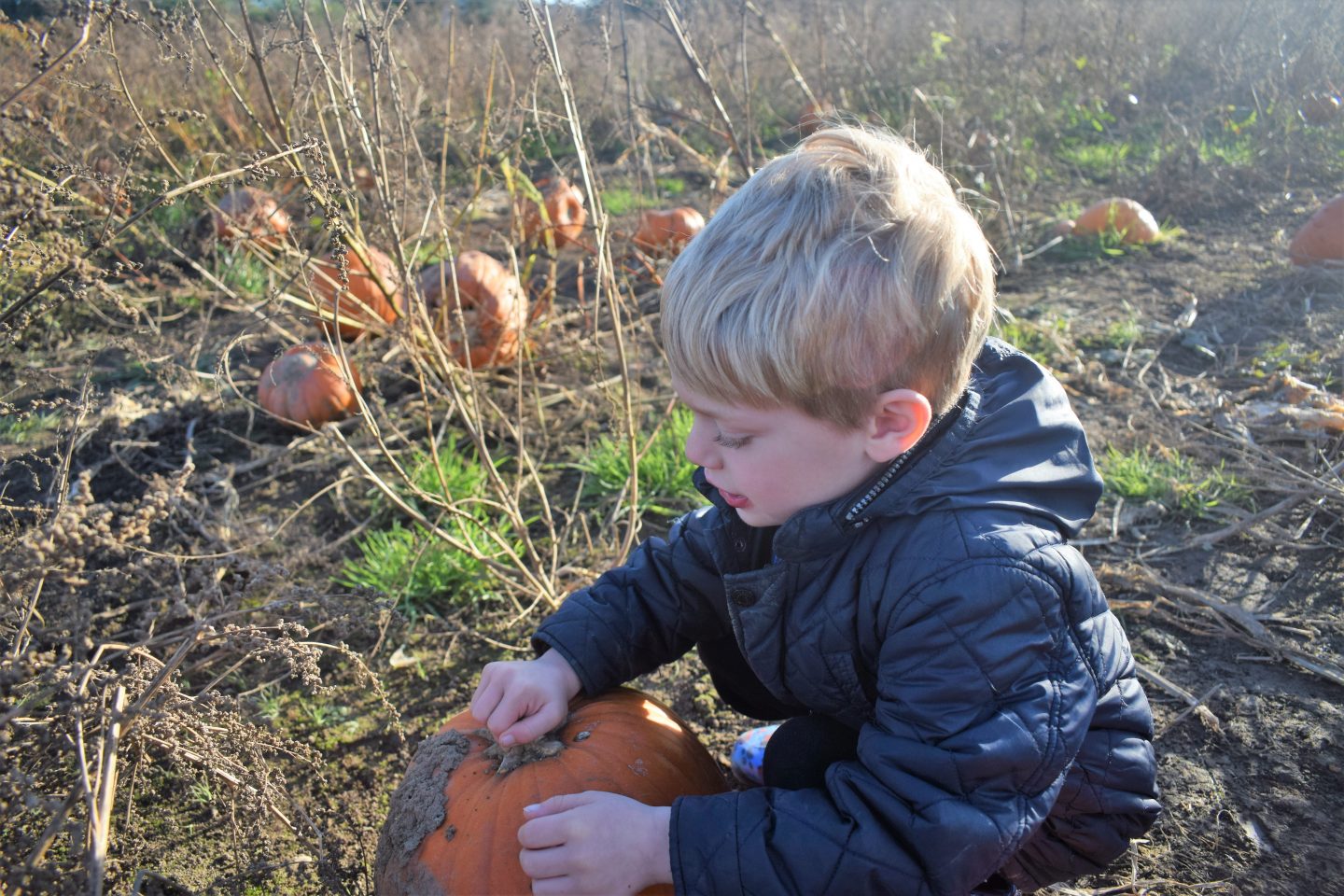 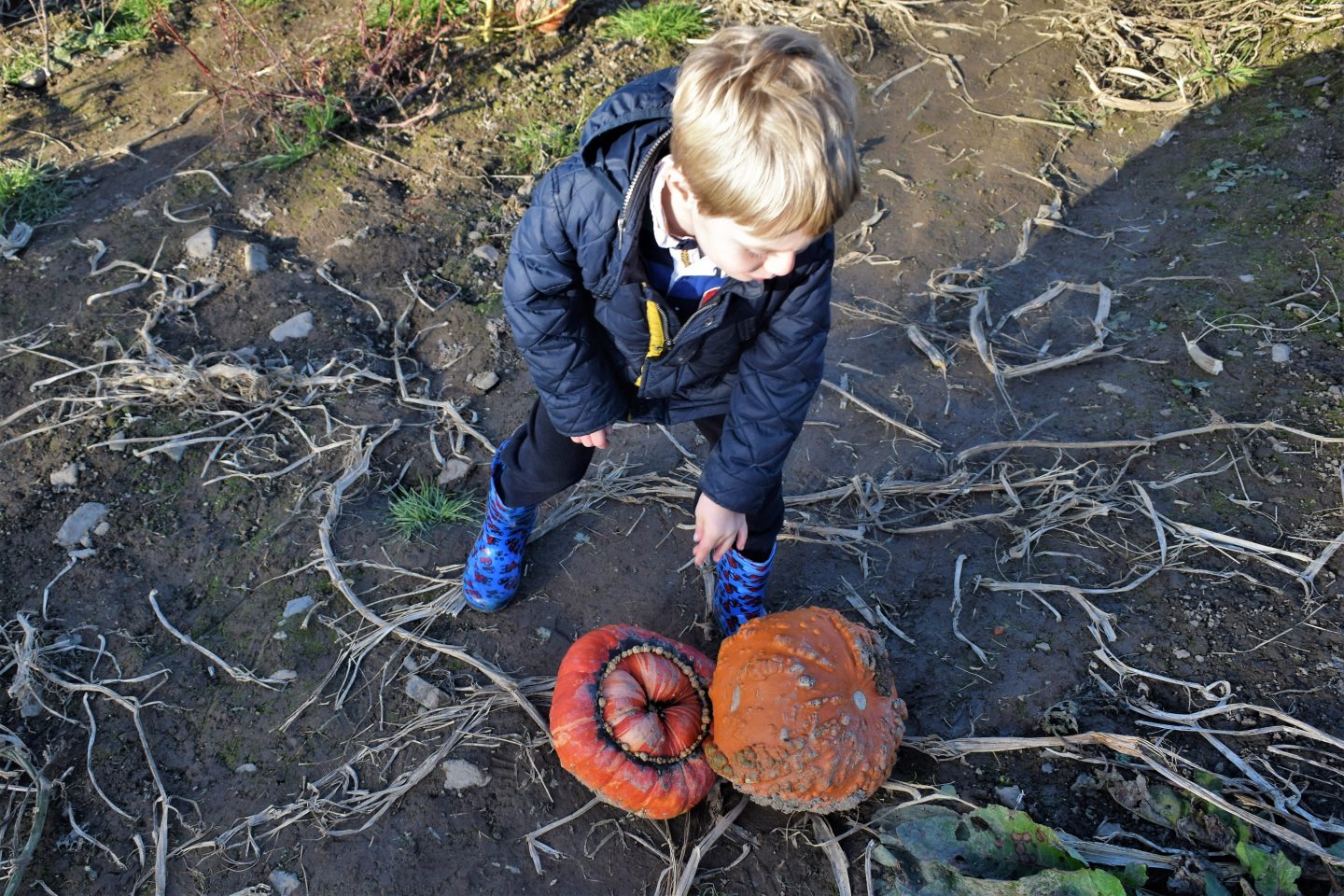 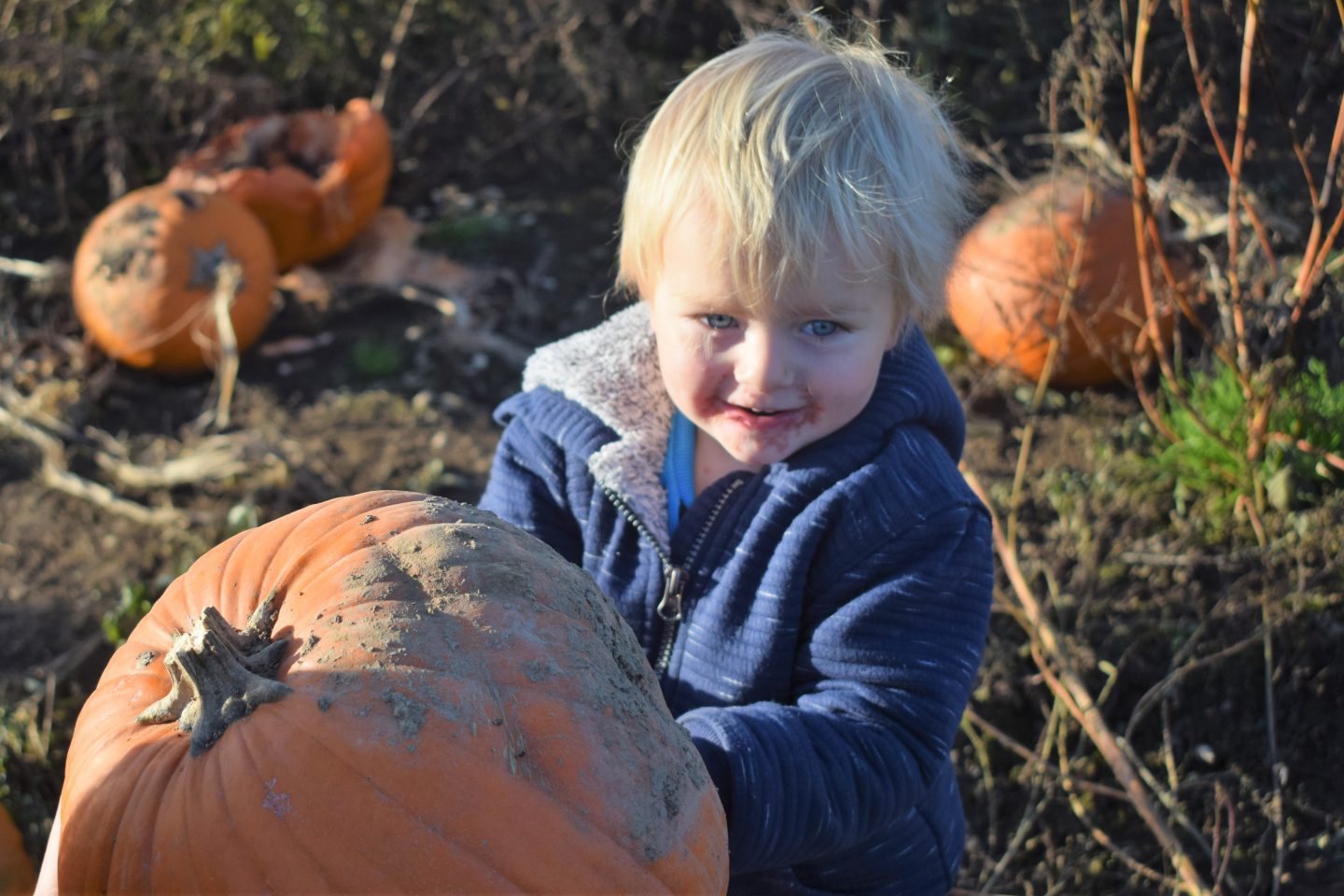 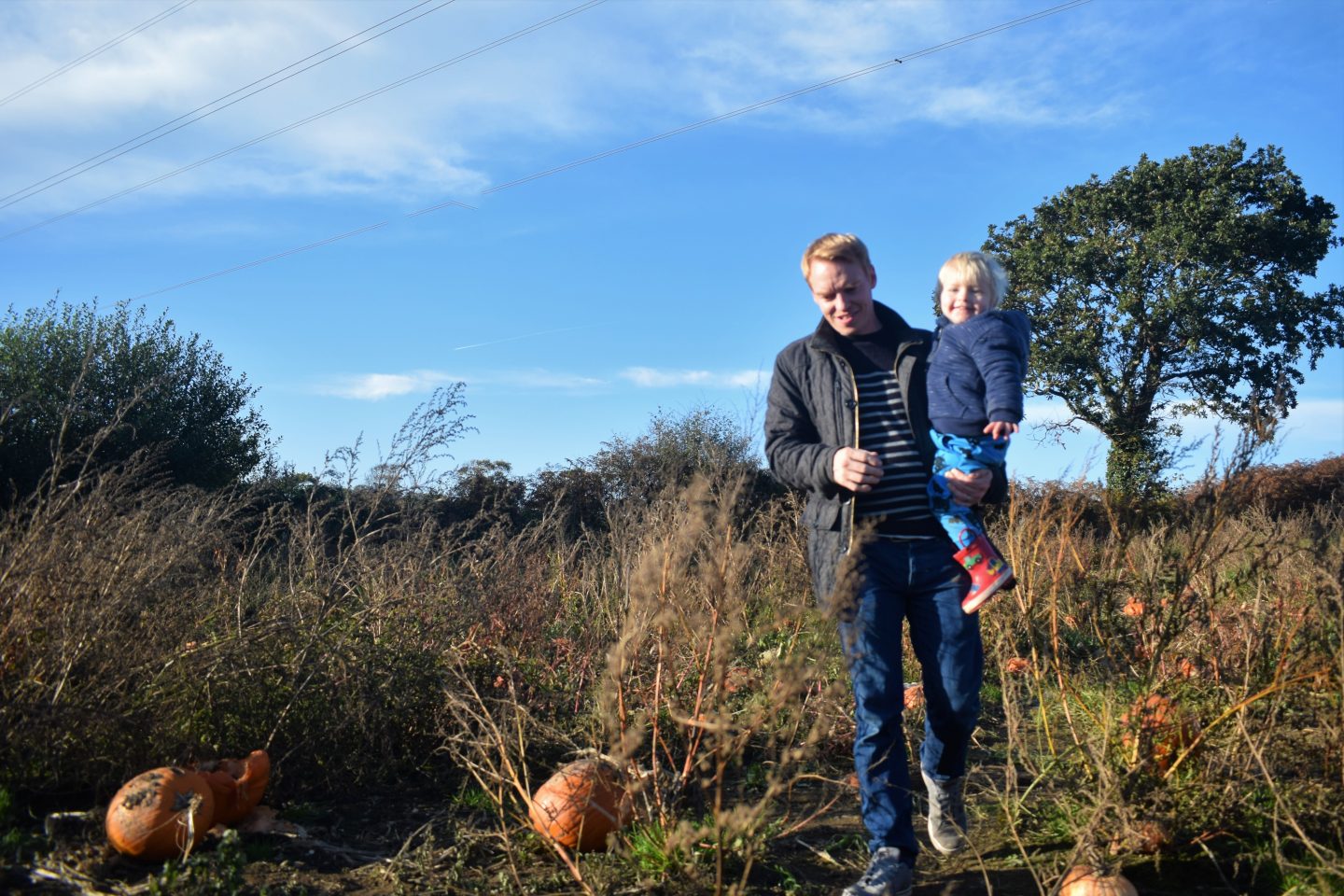 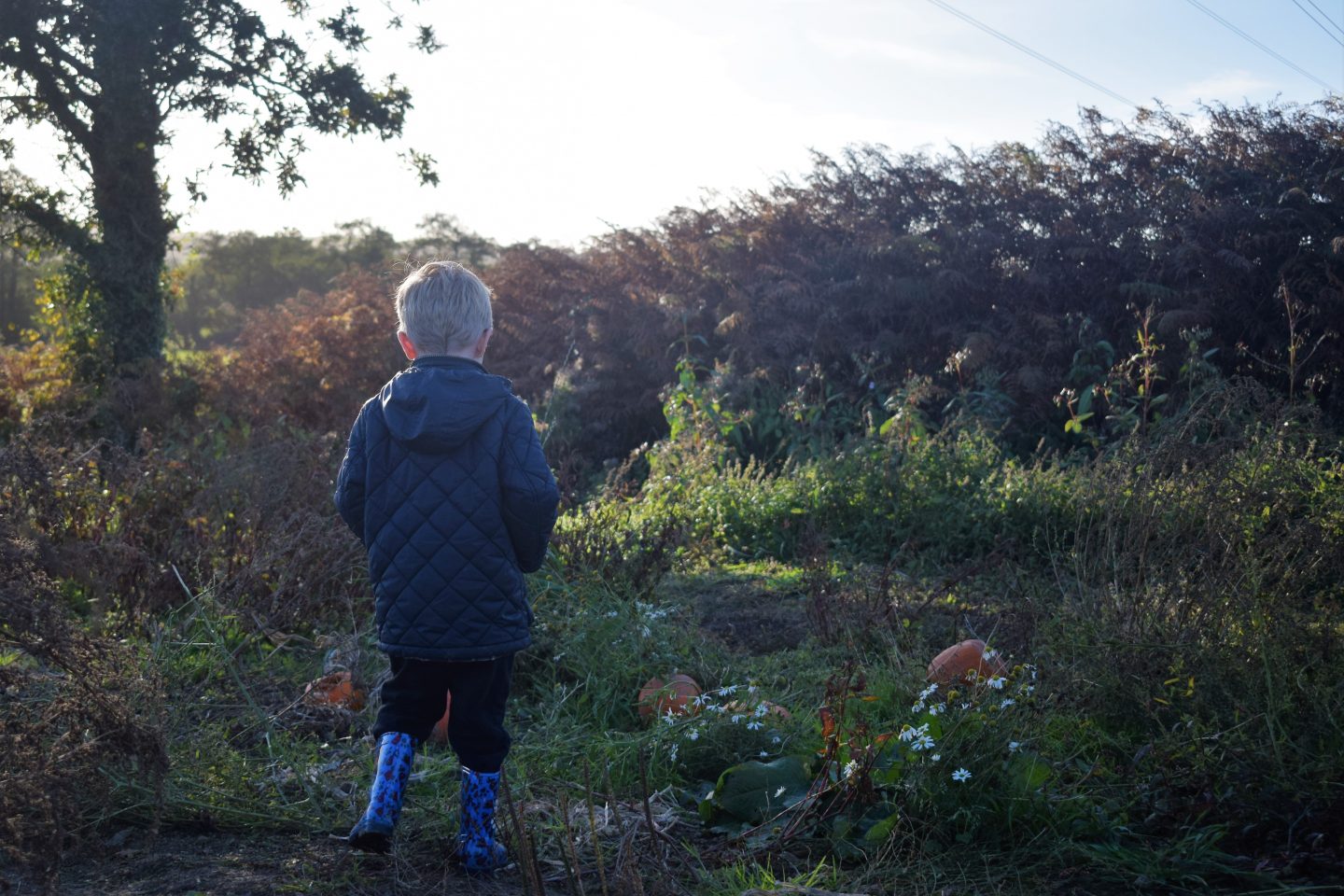 There were lots of cows in a barn, poking their heads through the bars to munch on some hay so we popped over so the boys could see them. Alex had lots of fun saying ‘Hello Cow!’ and both boys really wanted to feed the cows some hay but lost their nerve at the last second. There is also a very small pond near the farm shop so we went a said a quick hello to the ducks and geese before jumping back in the car and heading home.

The pumpkins are sat in the kitchen waiting to be carved and their flesh to be turned into tasty pumpkin pie. We spent a lovely hour or so wandering around the Penyfodau Fawr pick your own pumpkin field and if you are in the Swansea area and looking for a fun outdoors activity to do with the kids, I really recommend you take a walk through the Penyfodau Fawr pumpkin patch. 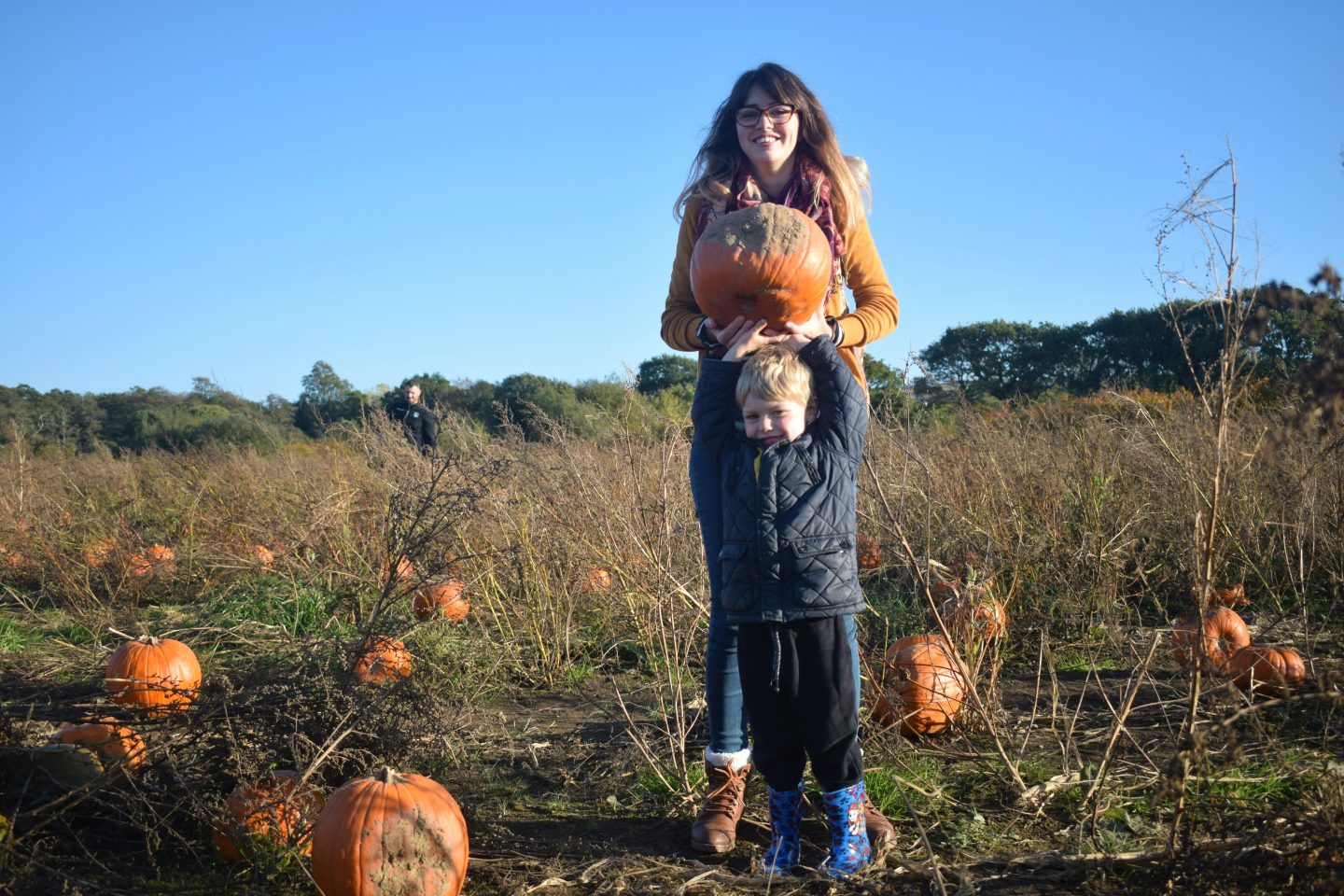 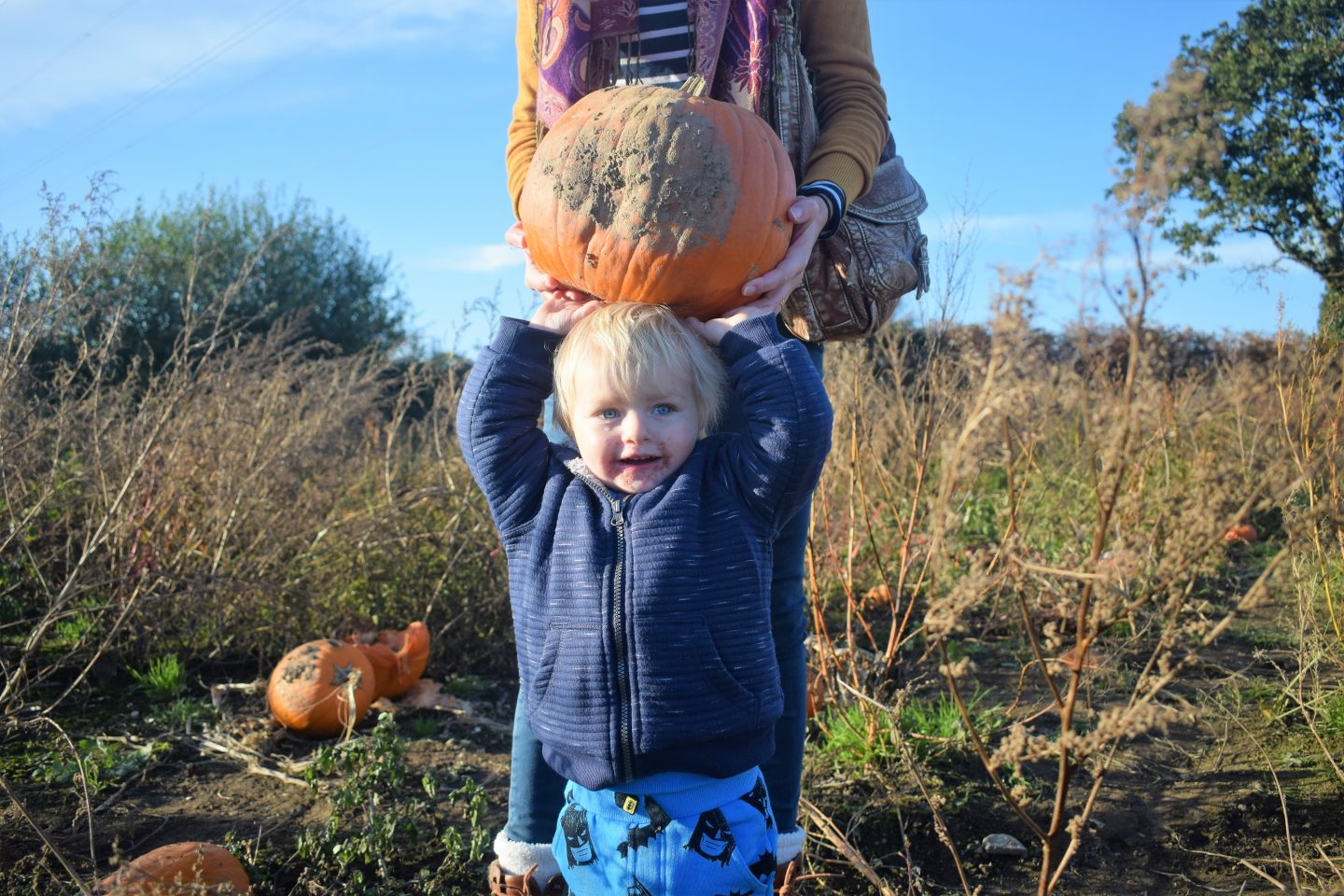 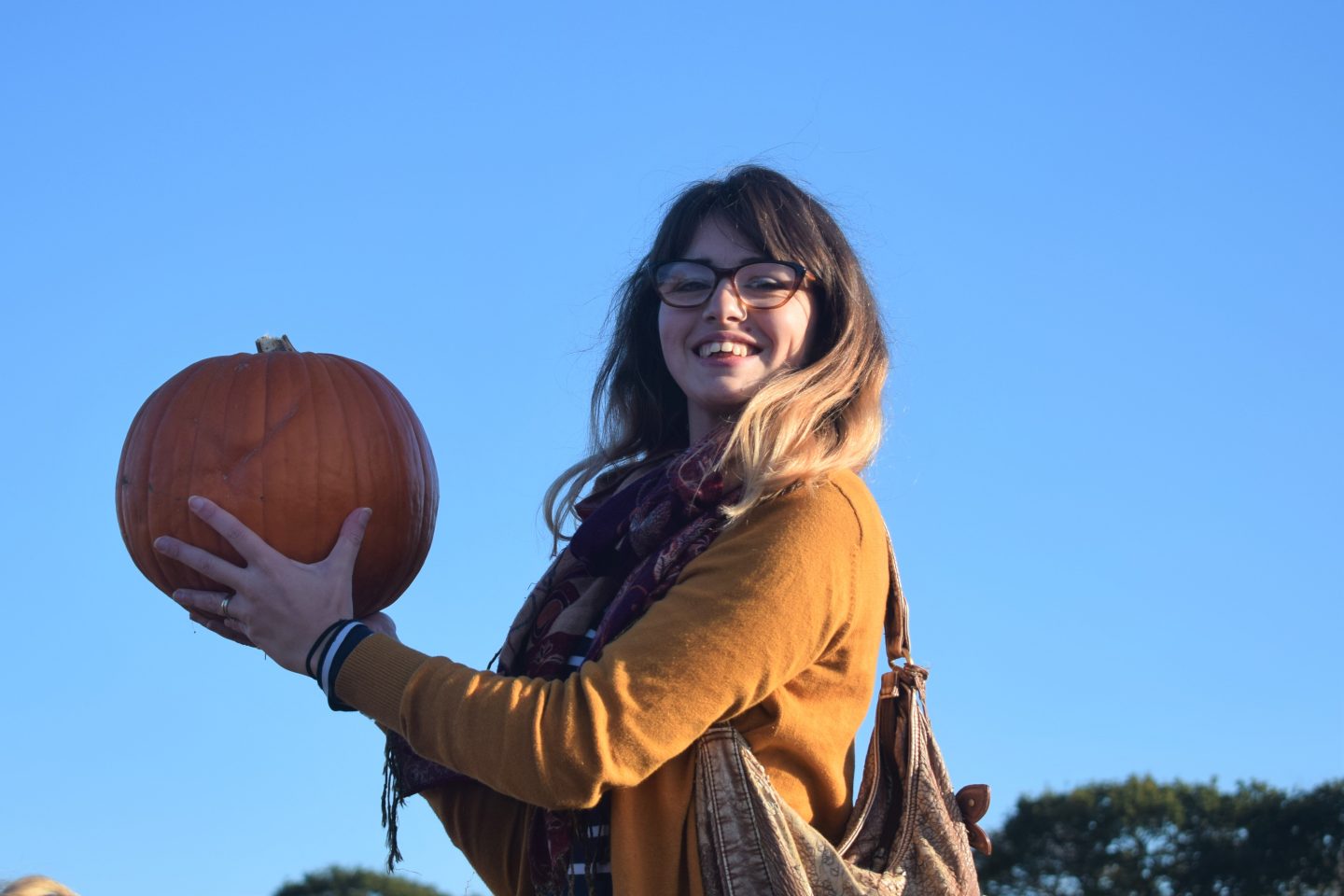 If you want to find out more about Penyfodau Fawr farm you can check out their Facebook page. If you want to pick your own pumpkin this year I would say get to the fields fast, you’ve not got long left until the big spooky day! 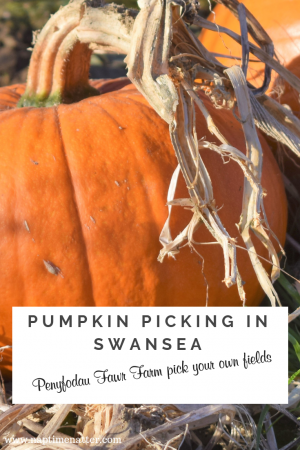