It is nearly Christmas! A week today Leo will be putting a mince pie out for Santa and a carrot for Rudolf and going straight to sleep while Oli and I relax on the sofa with some kind of festive beverage – well that’s the plan anyway. In reality, there will probably be the usual tears at bedtime and Oli and I will spend the evening trying to build complicated train tracks and doing our usual last minute wrapping. 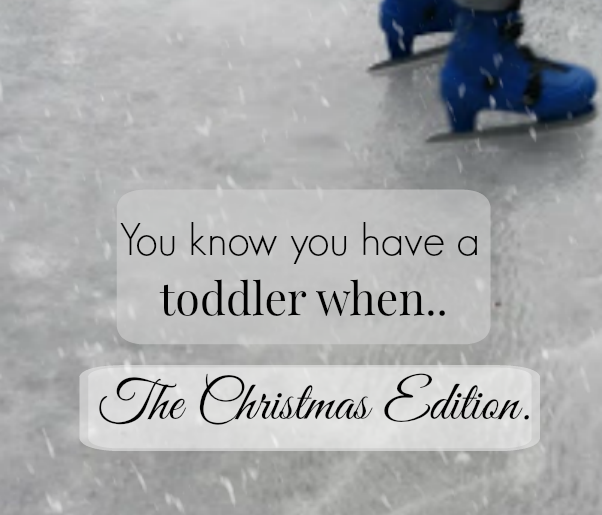 I love Christmas but I can’t help but notice the festive season is very different now that I am a mum. Having a little one brings all the magic back in to Christmas but being a parent also brings lots of other, not always quite as wonderful, things too. You know you have a toddler when was my second ever post on this blog, I have decided to write a Christmas edition. Parents of toddlers, let me know if you agree!
You know you have a toddler at Christmas time when…
1. There are more baubles on the floor than on the tree – I seriously don’t know why we even bothered decorating the tree, I really don’t.
2. You have done most of your shopping online – Have you ever tried maneuvering a pram around a jam packed shop before? It is not fun. I would much rather sit on the sofa while Leo plays with his toys. No boring shopping for him and no stress for me, everyone wins.
3. You are too scared to look at your bank account – This is a direct result of point number 2. This probably applies for most people but there are so many toys out there, sometimes it is hard to resist spoiling our little ones at Christmas.
4. You don’t get to watch Christmas films – Gone are the days of lazing around on December afternoons watching all the Christmas classics, Elf and Santa Clause: The Movie are the favourites in our house. Instead, the only festive TV I get to see are the Christmas special episodes of Thomas the Tank and Peppa Pig, on repeat. Maybe next year Leo will sit through a film that isn’t animated…
5. There’s no good time to wrap – Yes I could wrap Leo’s presents in the couple of hours in the evening between his bedtime and mine but I am way too knackered at that point to be trying to find the end of the selotape. It’s not even as though I can wrap other peoples presents in the day when he’s awake either because he would just end up unwrapping them or running off with the scissors.
6. Your kitchen table is covered in Christmas crafts – During December, you are bombarded with ideas for crafts on Pinterest and it is hard to resist giving them a go with your own child. I would not be surprised if Leo’s feet are going to be permanently paint stained after all the feet Snowmen/reindeer faces we have been making. Card, pipe cleaners and goggly eyes have been littered across our kitchen since December 1st and most of my little man’s ‘masterpieces’ are only really good enough to remain on the table where they were made.
7. You are excited for Santa again – You may know the big secret about the big guy but your little one doesn’t. Watching your toddler get excited about going to visit Santa and staring in awe at all the pretty lights, elves and reindeer is really amazing (until you finally get your turn to see Santa and your child is massively unimpressed/runs off crying). Leo loves to talk and sing about Santa all the time, I can’t wait to see his face on Christmas day when he see’s all his presents from Old Saint Nick.
8. Christmas day drinking isn’t the same – Unless you have family over who can watch your toddler while you pass out in a baileys induced coma by 5pm, drinking as soon as you wake up on Christmas morning maybe isn’t such a good idea any more.
So, Mums and Dads, do you agree? Would you add anything else to this list? I would love to know what has changed at Christmas now that you have a child.