What toddler doesn’t love Stick Man? Actually, what adult doesn’t love Stick Man? If you have no clue what I am on about, let me quickly fill you in. Stick Man is a children’s story written by the brilliant Julia Donaldson and illustrated by Axel Scheffler, the people who brought us the modern day children’s classics of The Gruffalo, Room on the Broom and so many more beautifully imagined story books. The story of Stick Man captured my Leo’s heart a couple of years a go and when I saw Stick Man Live was coming to our local theatre I just HAD to take him.  If you have a Stick Man fan in your family then you are definitely not going to want to miss this.

On Saturday we visited the Theatre Royal in Winchester for an hour of fun with Stick Man and friends. I was a little dubious that Leo wouldn’t enjoy it as, being four now, he has become a bit obsessed with screens lately and I was worried he would be disappointed he wasn’t there to watch a film. I had no need to worry though, Leo was excited before the show even began and to say he enjoyed the performance would be a massive understatement. Leo was by no means the youngest member of the audience either, Stick Man managed to bring in a crowd full of toddlers and even babies, all excited to see this fun story brought to life live on stage.

So, what did we think?

Leo and I absolutely loved watching Stick Man Live. The story of Stick Man’s disastrous morning jog is brought to life by a cast of just 3 people, a few puppets and some clever props.  The stage is mostly empty for the whole show, with just a bench portraying the family tree and a corner full of instruments occupying it for the whole duration of the show. There was no need for big fancy settings and props though as the 3 actors did an amazing job at setting the scene and engrossing the audience in the story right from the start.

If you have read Stick Man you will know the basic narrative, right?

Stick Man lives in the family tree with his stick Lady Love and his stick children three. One day he wakes early and goes for a jog, “Stick Man, oh Stick Man! Beware of the Dog!” .

Stick Man Live follows the story of the book almost word for word, only really deviating for the original source to include a few really catchy songs and a bit of audience participation. The younger faces in the crowd all loved playing a game of beach ball when Stick Man got washed up on a beach far from home and helping to point Stick Man and Santa back in the direction of the family tree at the end. Just to be aware, near the beginning Stick Man gets caught by a dog and there is a part of the show where the actor playing the dog runs around the auditorium barking , a few little ones seemed to freak out at this part so maybe pop yours on your lap when the dog appears if they are a bit nervous.

The songs in Stick Man Live are so catchy, I have been singing the opening number ever since Saturday afternoon! I have caught Leo singing it a few times now too, I don’t think we will ever be able to read the books again without bursting into song. All three actors had fantastic singing voices and as well as the few musical numbers there was a score of music playing almost constantly throughout the show that was simple yet quirky and fit the story perfectly. There was also live saxophone and drum playing which enriched the performance even more and at no point did I feel like I wished there was a larger cast or that the production of the whole show was bigger.

With a performance duration of just under an hour, actors with the energy and enthusiasm of 10 Cbeebies presenters and a story that they already know and love, I would say Stick Man Live is a perfect way to introduce your toddler to the theatre. I didn’t see or hear any little ones wanting to leave, instead there was just giggles all around, lots of shouts of joy and a whole load of applause when the show was over.  Leo had the biggest grin on his face right from the start and it remained there the whole time, he really enjoyed himself and it was a lovely way to spend an hour together.

If I had to describe Stick Man Live in 3 words they would be: quirky, charming and simply wonderful.

Stick Man Live is touring across the UK until January 12th 2018, you can find a full list of tour dates and prices on the Stick Man Live website.

Leo and I had fantastic time watching Stick Man Live, thank you Scamp Theatre and Freckle Production for creating such an imaginative performance based on one of my boy’s favourite stories. 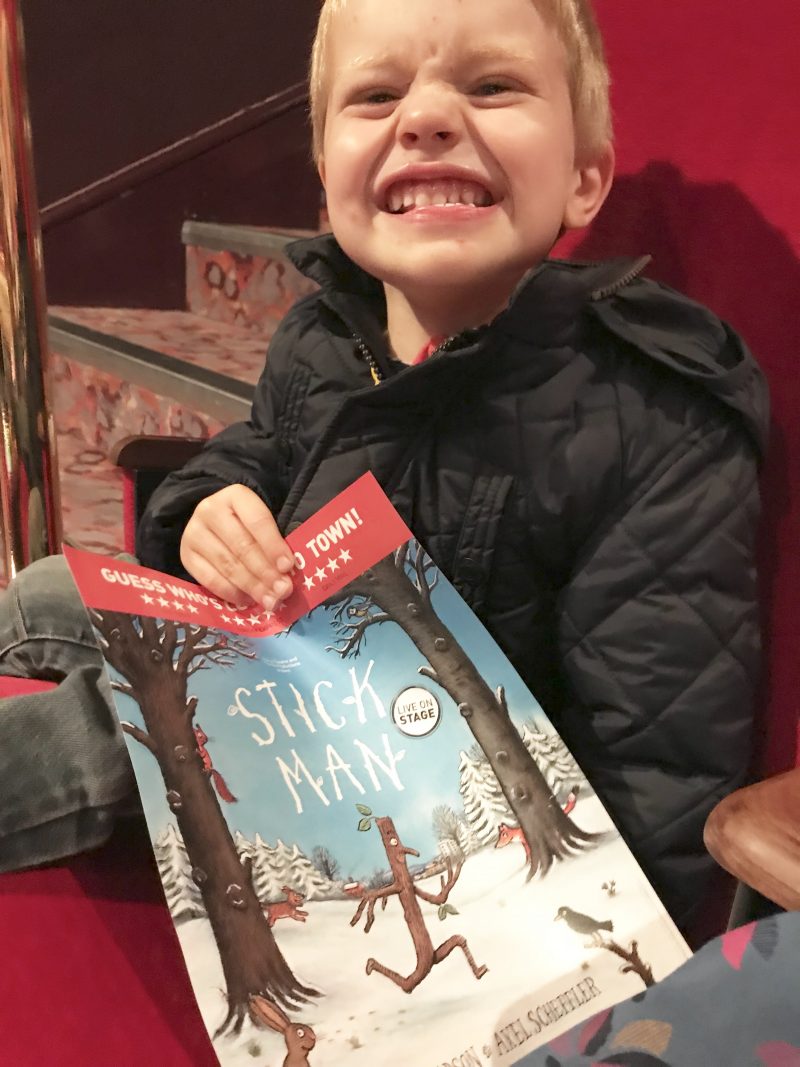 Have you seen Stick Man Live? What did you think? Are you thinking about taking your toddler to the theatre for the first time soon? I would love to hear your thoughts.