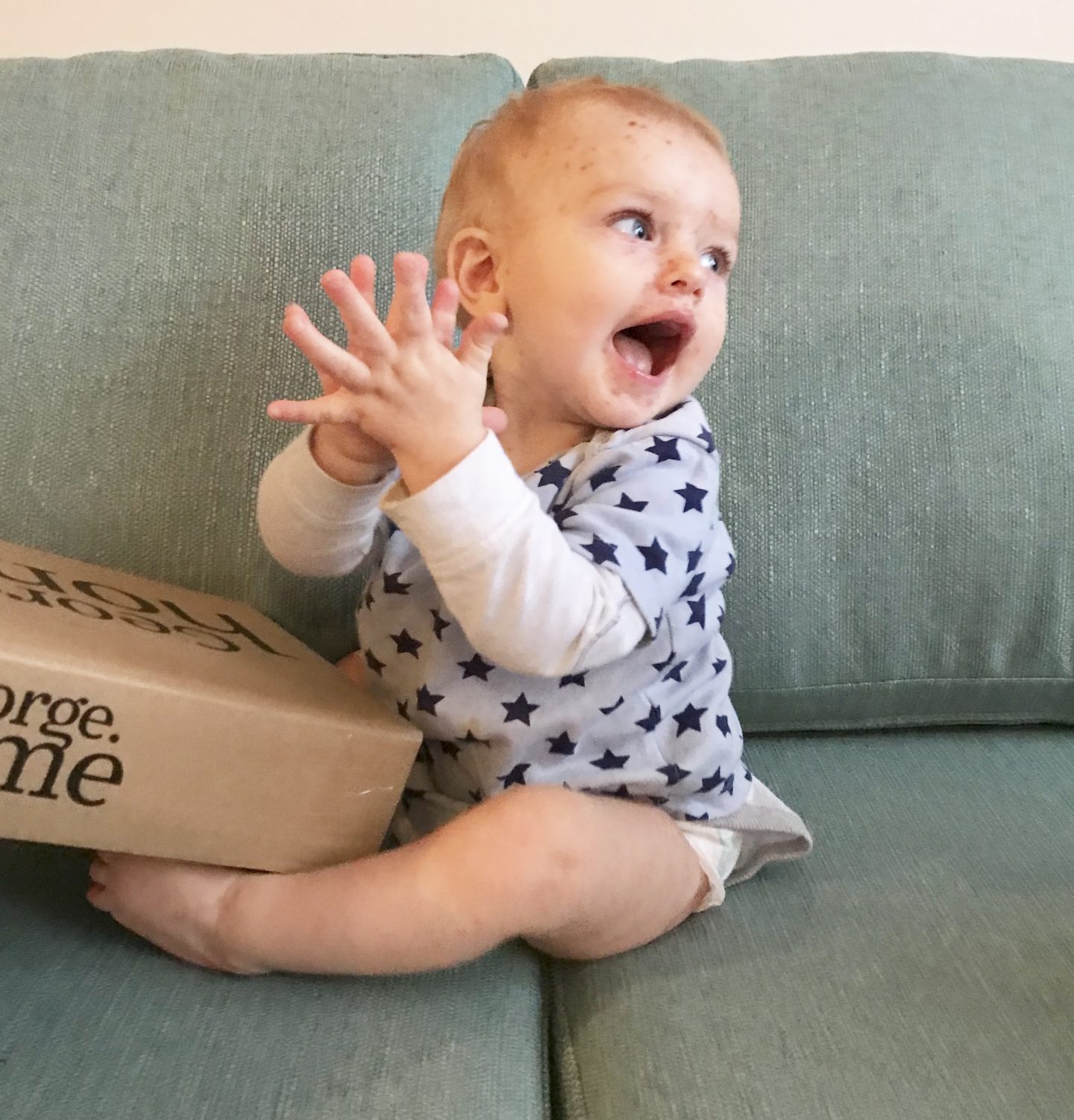 It’s happened. My baby boy is now one whole year old! I am sorry to word vomit out all the clichés but I can not believe how fast the past year has gone and how quickly the time flies by once you become a parent. We had a lovely day celebrating the big ONE on Saturday with just Alex’s Nanny and Grampy and the four of us. If you follow me on social media then you will know that Alex has got chicken pox. It has been awful timing and a really tough week but he seemed to turn a corner and was actually able to enjoy his big day. It honestly feels like moments ago that I was sat at this computer writing Alex’s birth story and it just feels completely crazy that I am now about to write his one year update! Here it is, Alex’s 12 month update (wow!) … 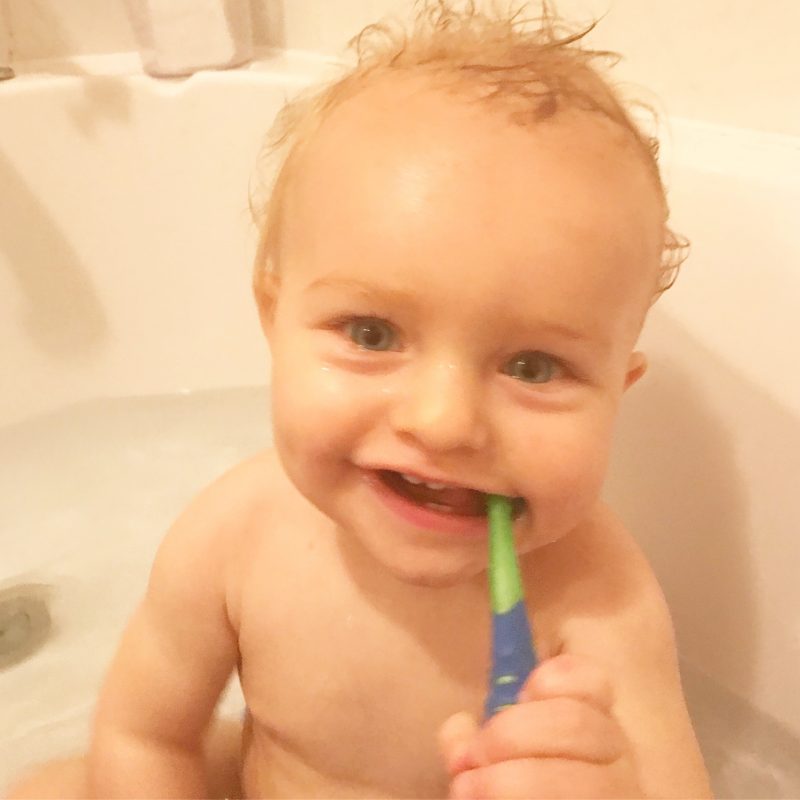 Size – Not one to break old habits I still haven’t been to get Alex weighed (oops). He is definitely growing though, he has had to move into the next size nappies and his 9-12 months clothes are looking more tight than just a bit snug. Luckily he got loads of lovely new clothes for his birthday so I don’t need to worry about not having anything in his wardrobe that actually fits him properly.

Teething – This month there has been A LOT of dribbling going on. Alex has been dribbling so much he has been soaking through his clothes and he seems to have developed a new hobby of blowing raspberries which is a bit gross as we get soaked in all his slobber. But, all that dribbling has not gone unrewarded as Alex now has new tooth, it came through last week during chicken pox hell so the poor boy was in a lot of pain. Alex has 6 teeth now and his smile just looks so grown up, gone are the days of his little gummy grin. 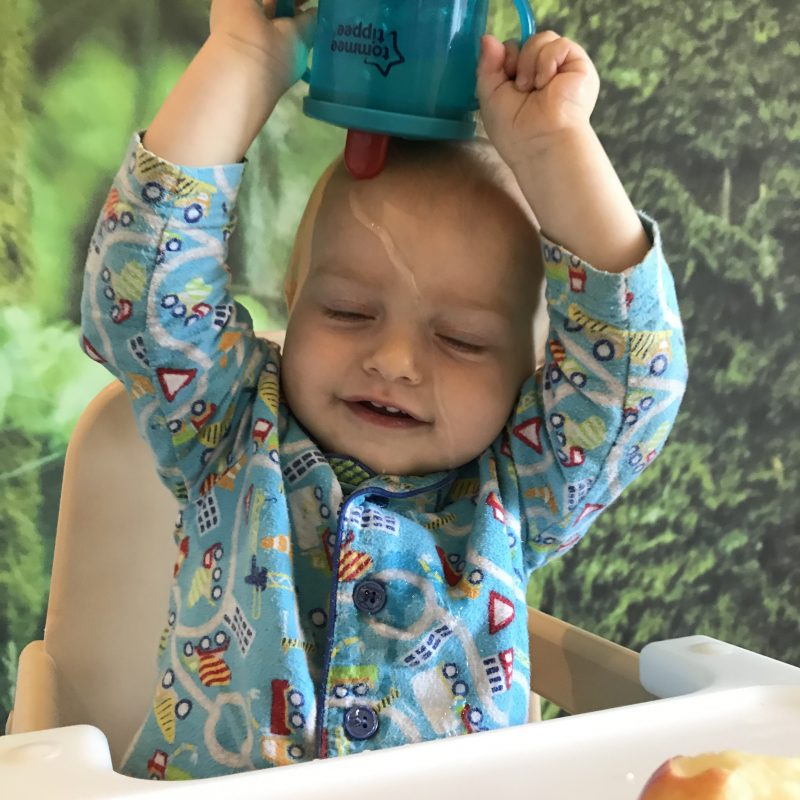 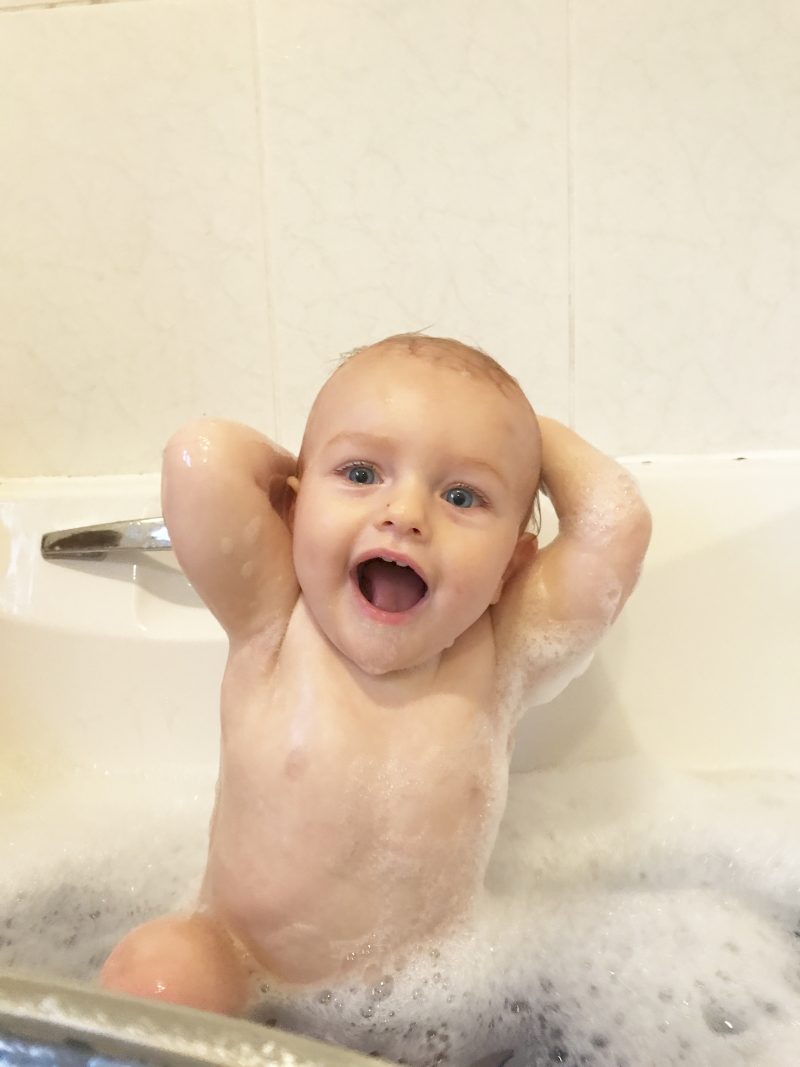 What he likes/dislikes – Well, he definitely dislikes having chicken pox but I can’t blame him for that one really! He does not like getting his own way, I am predicting the terrible twos are going to be really challenging with this one. Unfortunately for me Alex seems to have developed a bit of a dislike of vegetables. He eats the same meals as us now but he has got very clever at eating all the carbs and meat parts of a meal and just completely ignoring the veg I put out on his highchair. Hopefully I can convince him to start eating it again as I really don’t want to relive all the mealtime dramas we had when Leo was a toddler. Alex really likes stealing my phone, playing peek a boo, me singing Row Row Row your Boat, breastfeeding, playing with his toys and watching every little thing that Leo does. WE bought him a kitchen for his birthday and he already loves playing with that but he does still really enjoy crawling into the real kitchen and opening the cupboards (must babyproof!). He loves cuddles, kisses, tickles and clapping hands; he’s such a happy little boy. 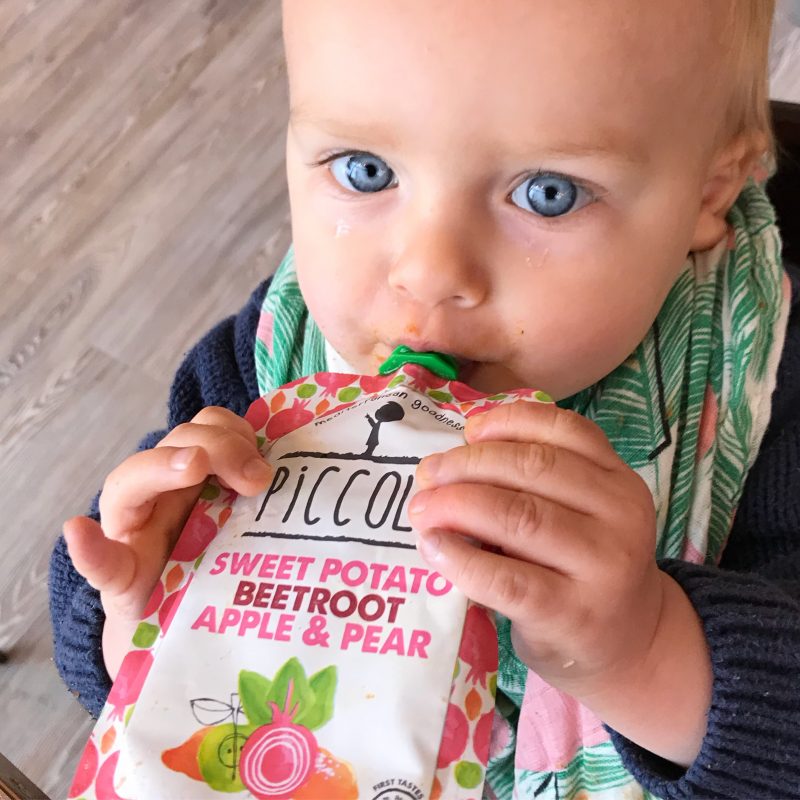 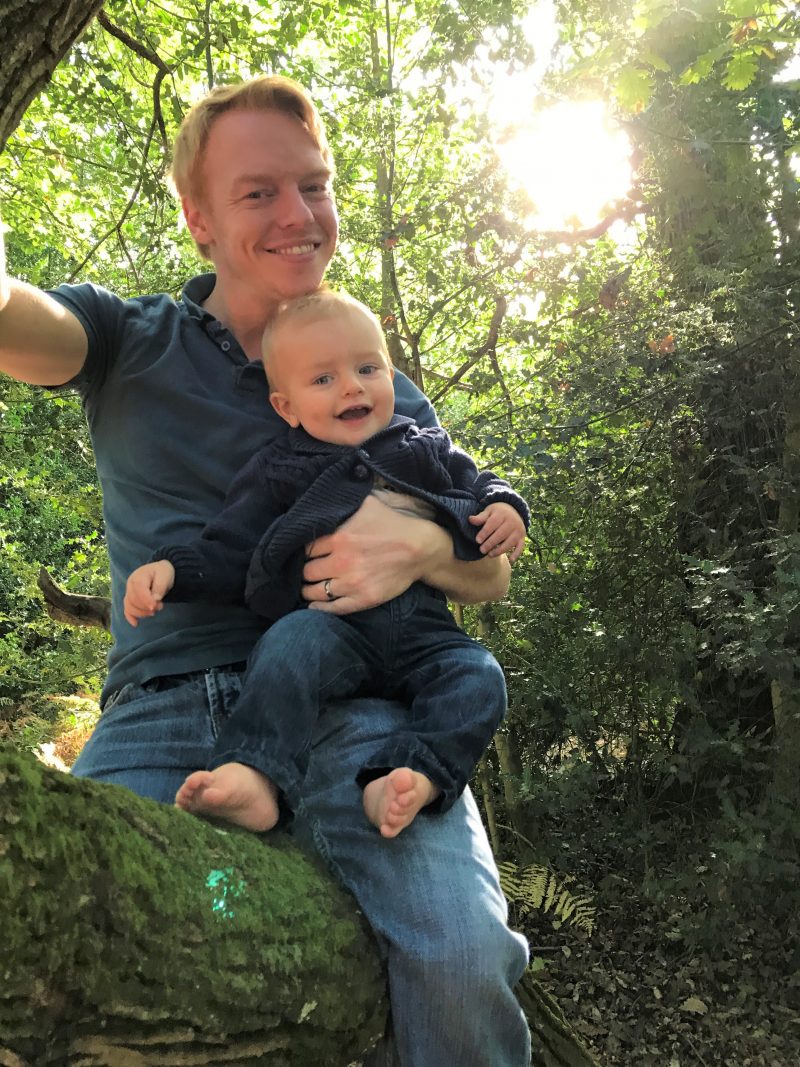 Character – Cheeky and affectionate probably best sum up this boy of mine. He is so cuddly and he gives us really cute open mouthed kisses now and nuzzles his little head in for a cuddle all the time. He likes getting up to mischief and trying to demolish everything in his path but he does it with a big smile on his face. He really is just so happy and it is has been really hard this week seeing him so upset and inconsolable because of his chicken pox. 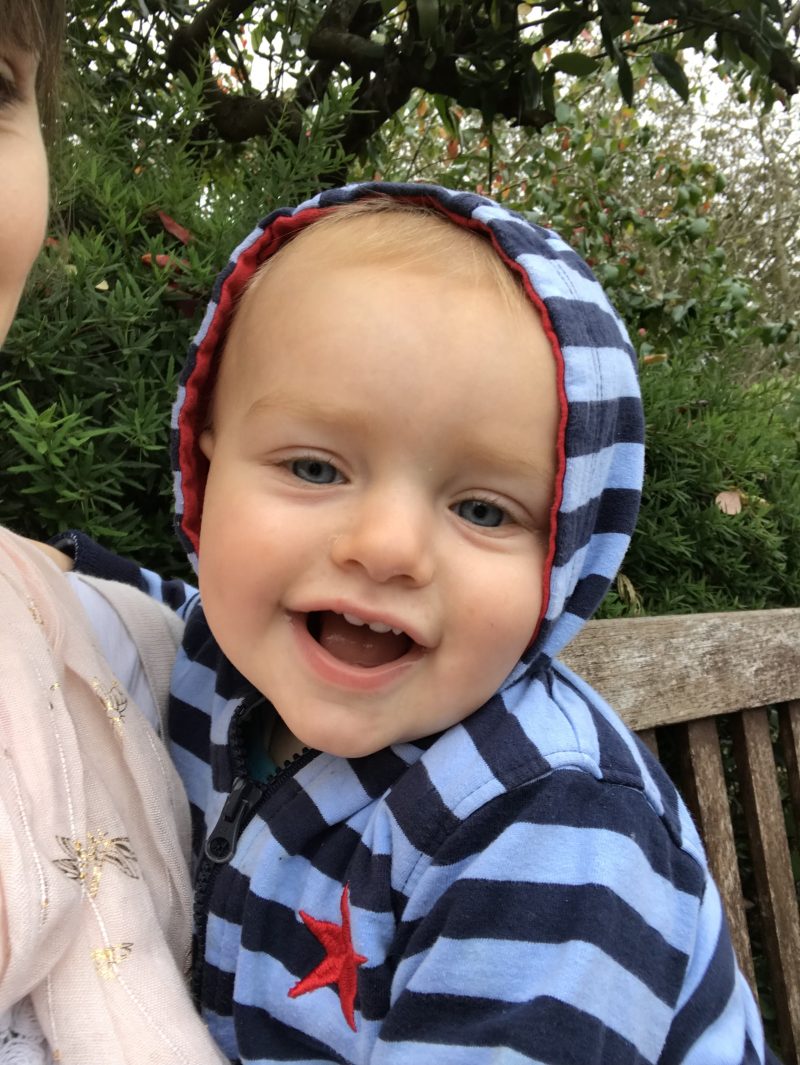 Feeding – So, we have only gone and smashed my goal of breastfeeding for the first 12 months of Alex’s life. Alex still cries for his feed every morning and wants it before bed every night without fail too. During the day feeds have become very sporadic this month, there is no real routine or schedule. If Alex starts pulling at my top or getting grizzly then I will feed him but if he doesn’t want any then I don’t. I really like this more laid back approach and as Alex is eating so much solid food now and drinking lots of water, I don’t panic if he doesn’t having any milk all day. I will be writing a whole separate post in my breastfeeding diary about my plans now that Alex is one  but I don’t think we will be stopping any time soon, it’s just so easy now and the fact that he can take it or leave it really takes the pressure off me. 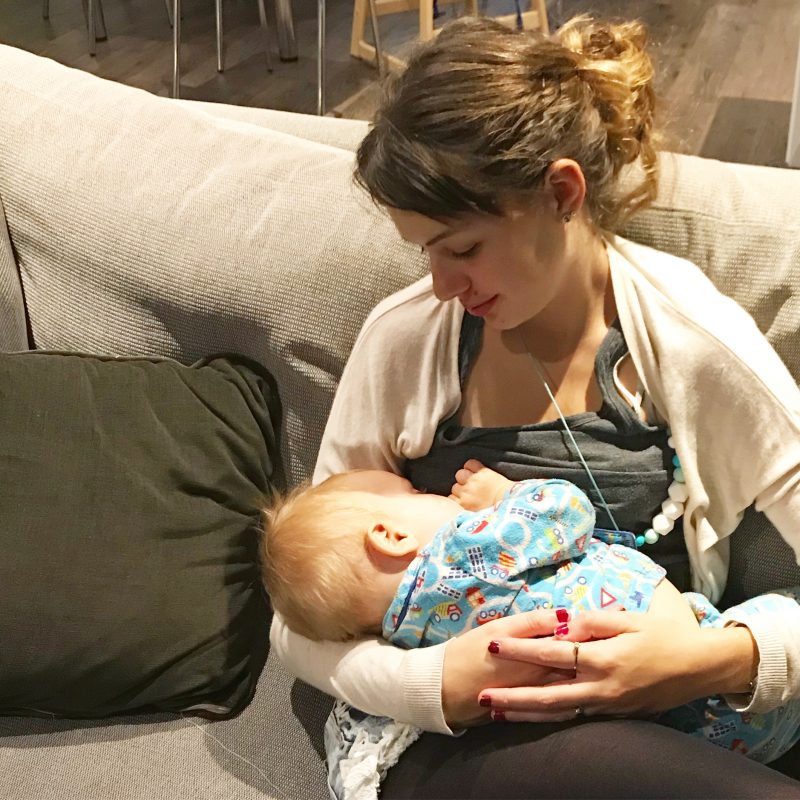 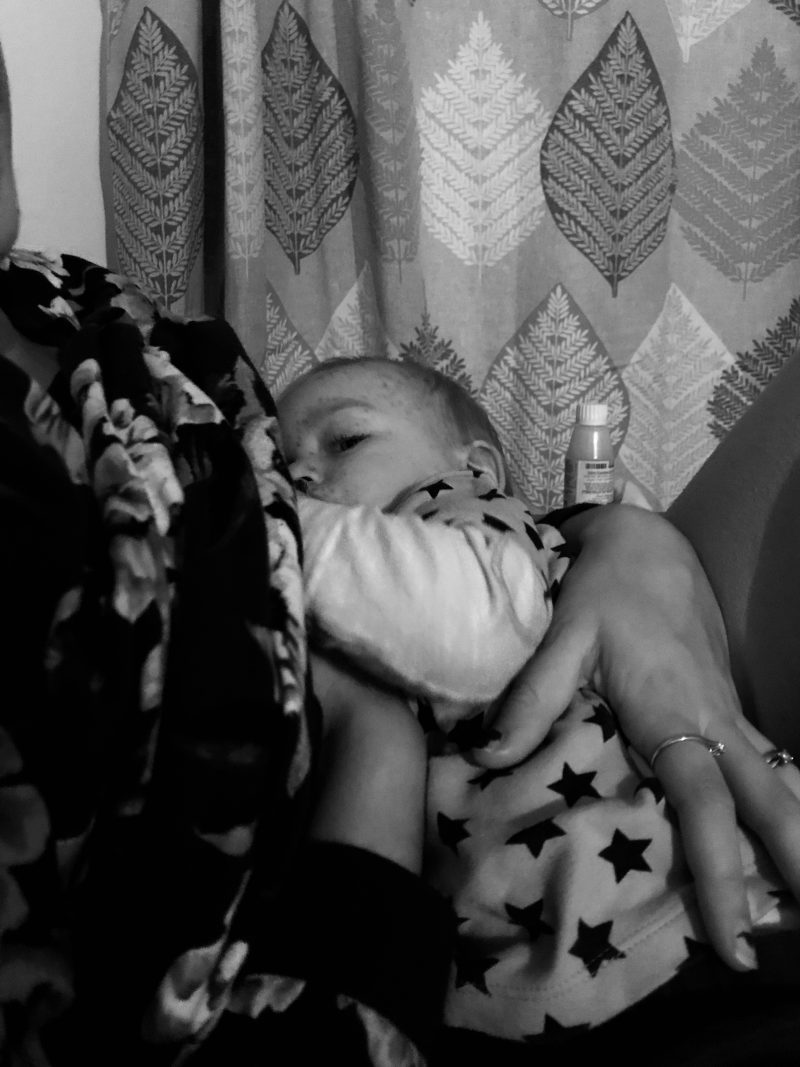 Weaning – So Alex basically just eats ALL THE FOOD. Unfortunately his favourites appear to be all the less healthy things like chips, fish fingers and biscuits (he only gets these occasionally though). He dos love fruit though and will eat veg if I blend it up, he just seems to have an issue with eating a piece of broccoli even though he loves it mashed up. Some days Alex eats so much food I wonder how isn’t double the size, he can easily eat more than Leo and I often wonder if I will ever be able to fill him up.

Sleep – Apart from this week where chicken pox has messed everything up and there was one night where we probably got 2 hours sleep at most, Alex is sleeping really well. He usually has one nap in the morning and then is awake until he goes to bed around 6.30. When he is not poorly he will sleep through for 12 hours which is amazing and I feel so lucky to have such a good sleeper – until the next sleep regression that is! 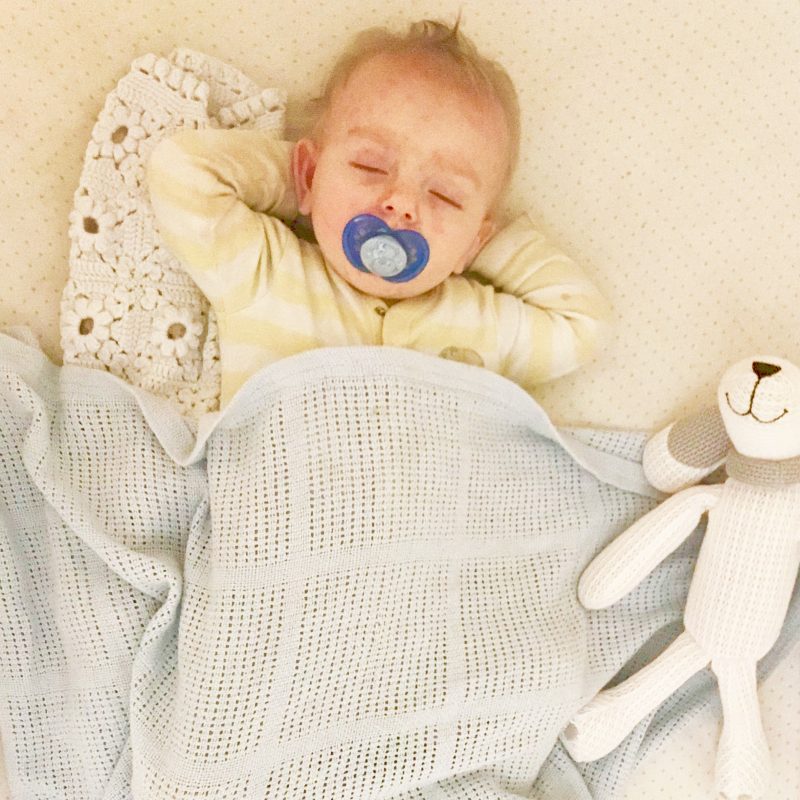 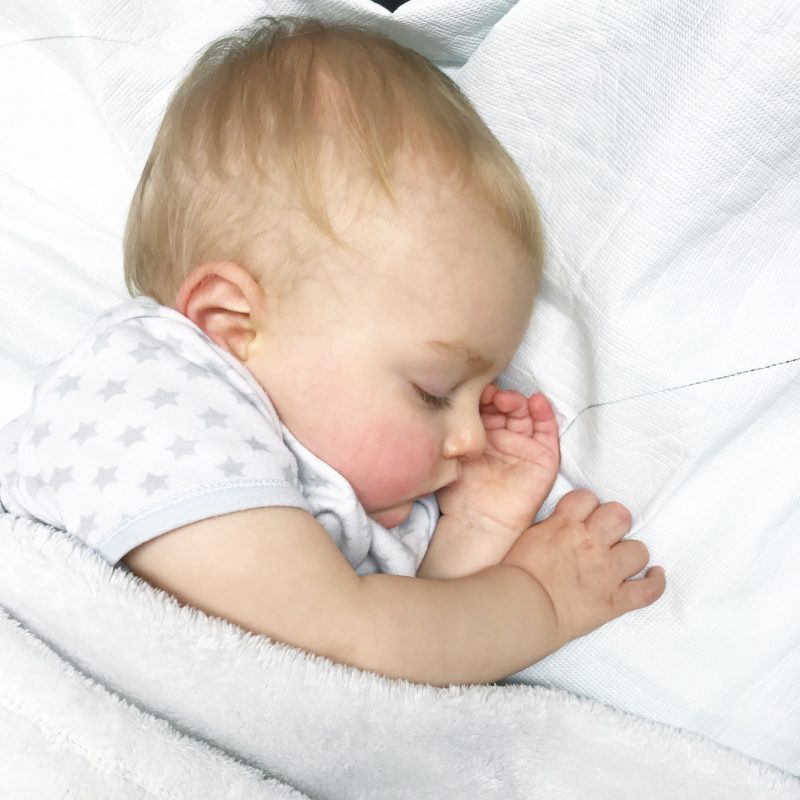 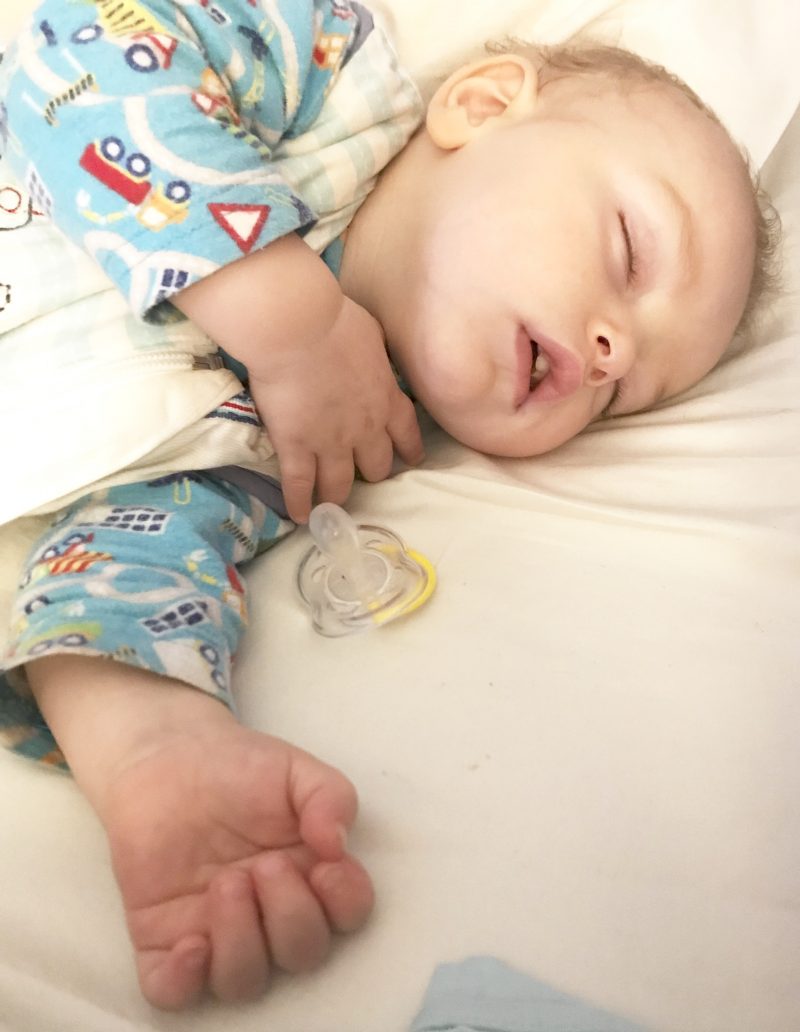 Where we have been/who we’ve seen – Well, October 2017 will always be remembered as the month both boys got chicken pox and we just hibernated for 3 weeks. Thanks to Leo being poorly and then Alex straight after we have hardly been anywhere this past month. We did manage a lovely family day out to the beach before sickness struck and had a day out in Winchester last weekend in the 2 days reprieve we had from the pox. We also had a family weekend away to Centre Parcs at then end of September for my mums birthday. It was lovely to spend time with our families and have a break away. 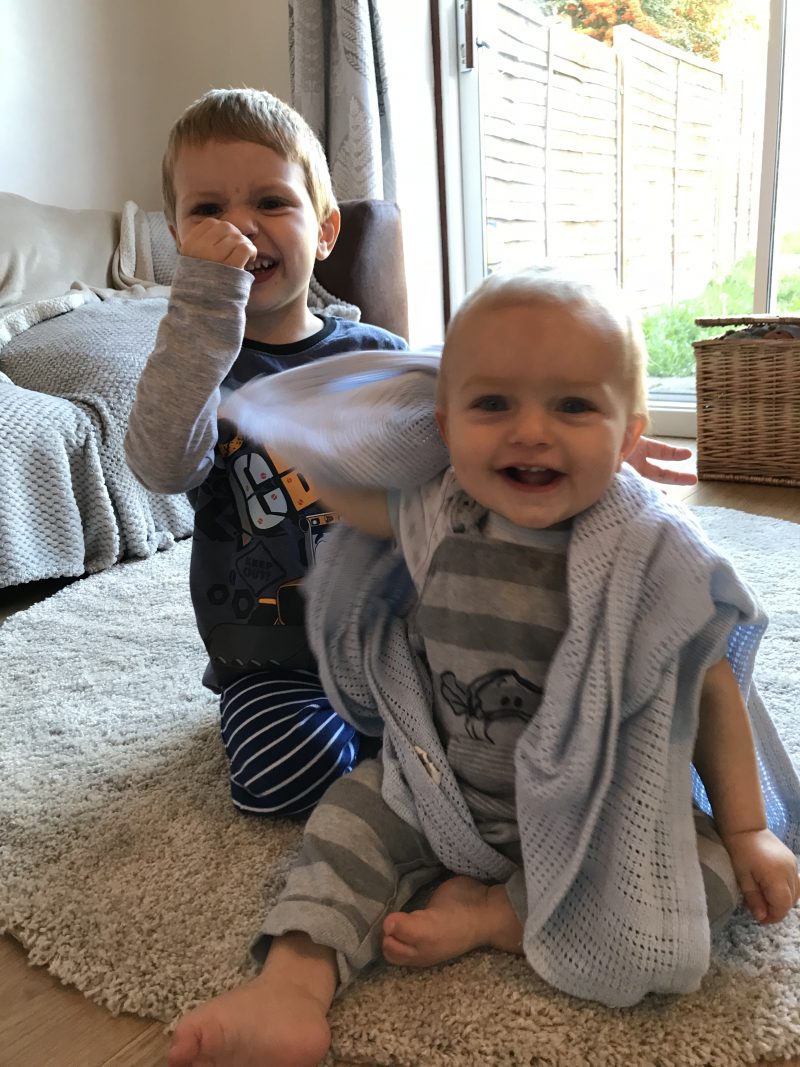 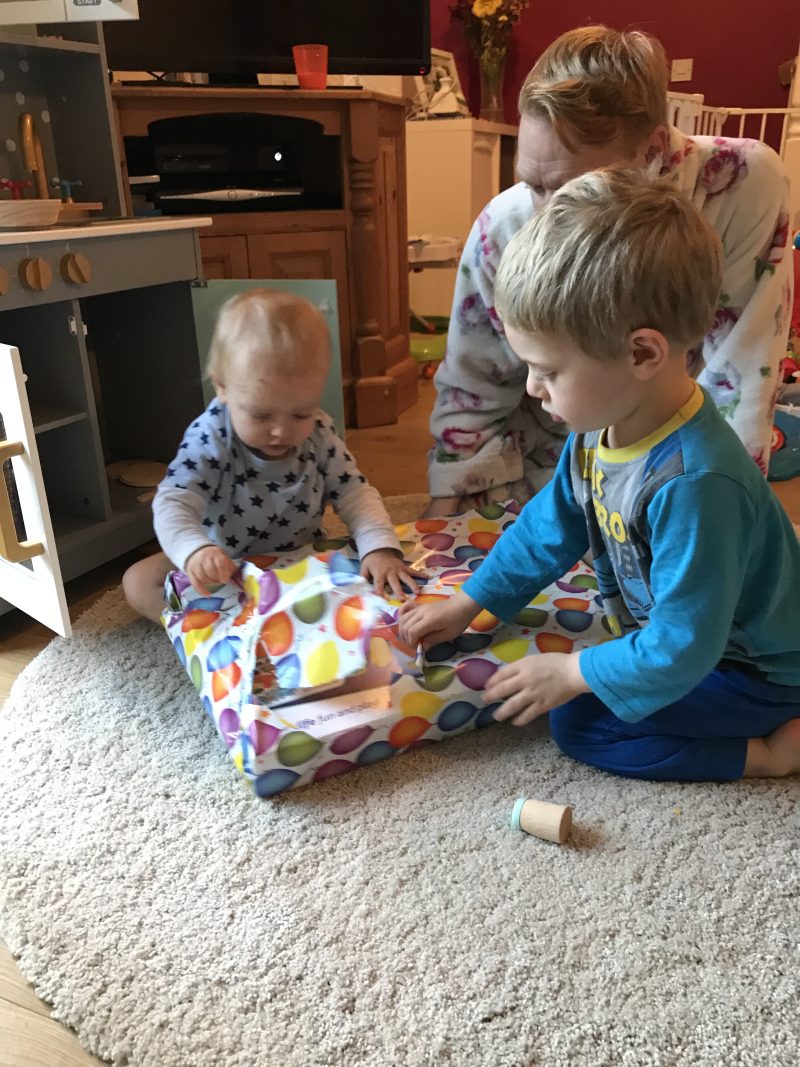 Brothers – Ahh, I just don’t know what to say any more. I am fiding myself thinking more often than I would like that maybe Leo just doesn’t like his baby brother. I can tell that Leo is desperate for attention and whilst I give him as much as I can it is never enough as Alex is always with us. He craves me or his dad all to himself and sometimes that is just impossible. We have to have so many serious chats with Leo about his behaviour towards his brother, he has never hurt him but we can see that on so many occasions he has wanted to and sometimes he even says he does certain thing because he wants Alex to hurt himself. It is so hard some days and Leo starting school has actually really helped. I miss him loads during the day but not having to constantly be saying ‘be gentle’ and worrying about what the two of them are doing when I run to the toilet or something has been a very welcome. There are obviously times where Leo is nice to Alex, he kisses him and says he loves him but, even after a whole year, I can tell that a lot of the time Leo can’t really be bothered with his younger brother and sees him more as an annoyance than a friend. I am hoping that as Alex continues to grow that they boys will start to bond better. 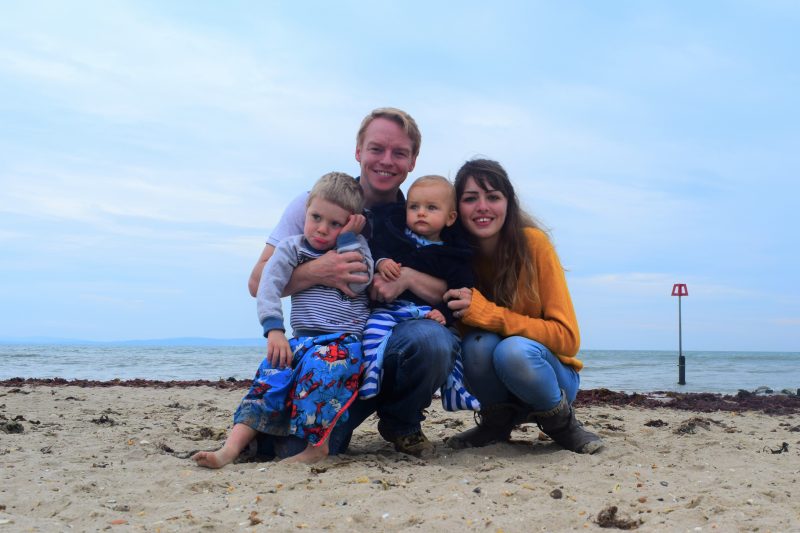 As always Alex has changed so much this month and has started doing lots of little things I don’t want to forget.. 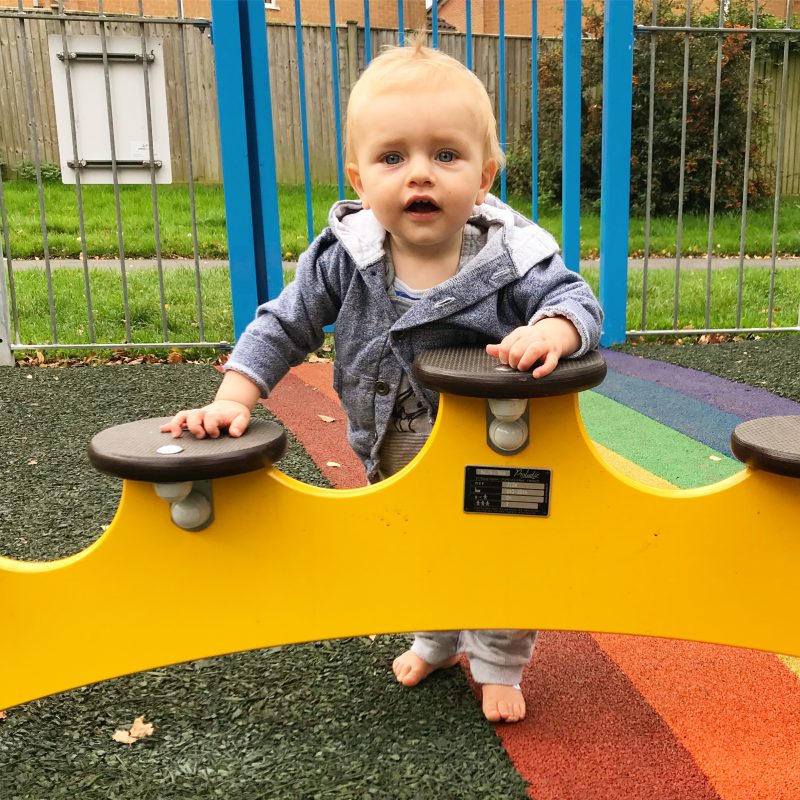 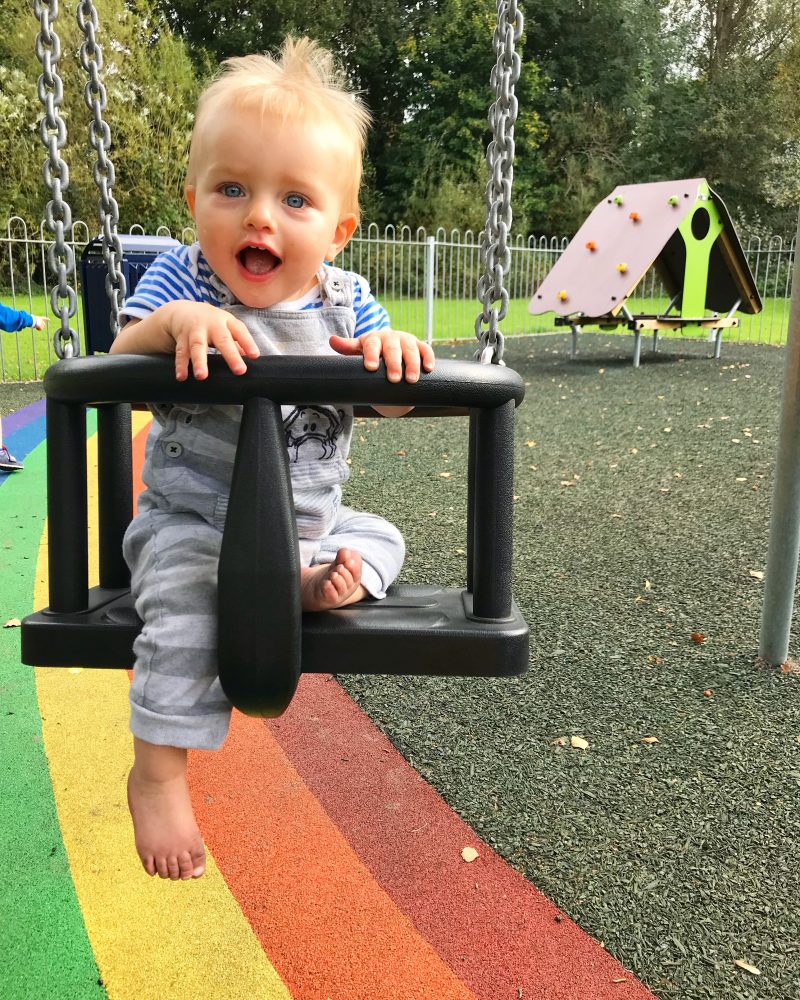 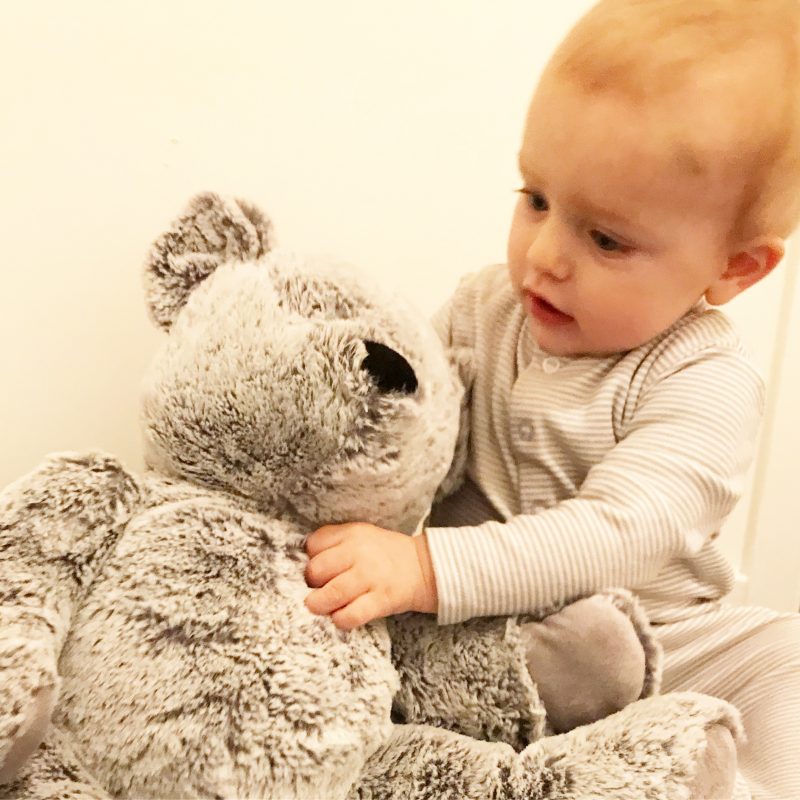 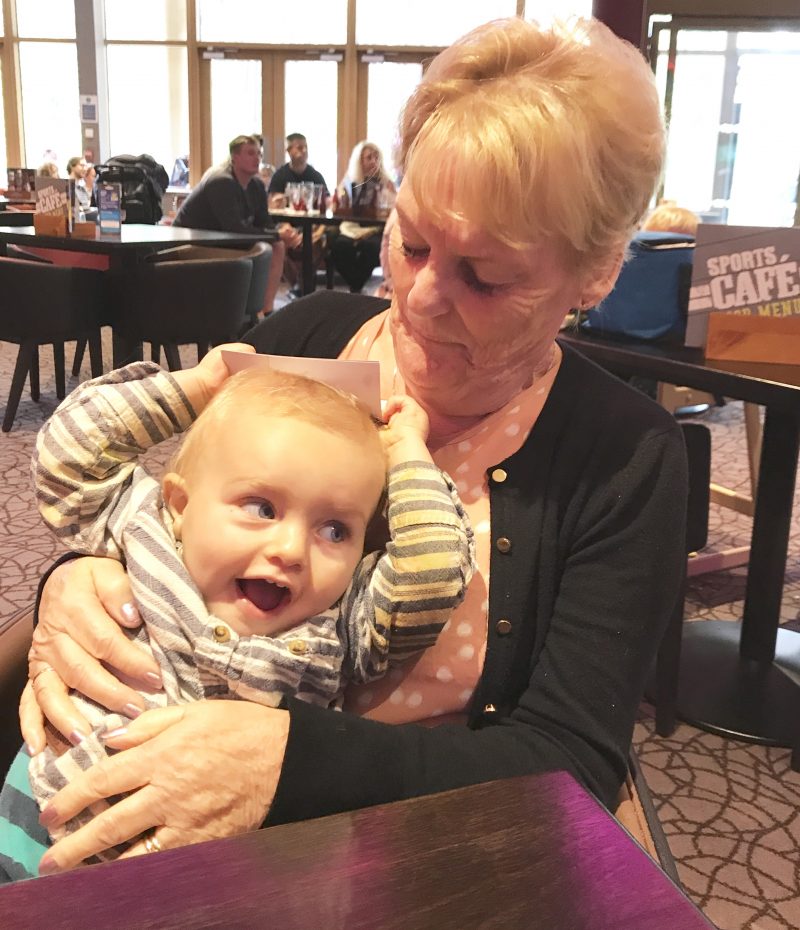 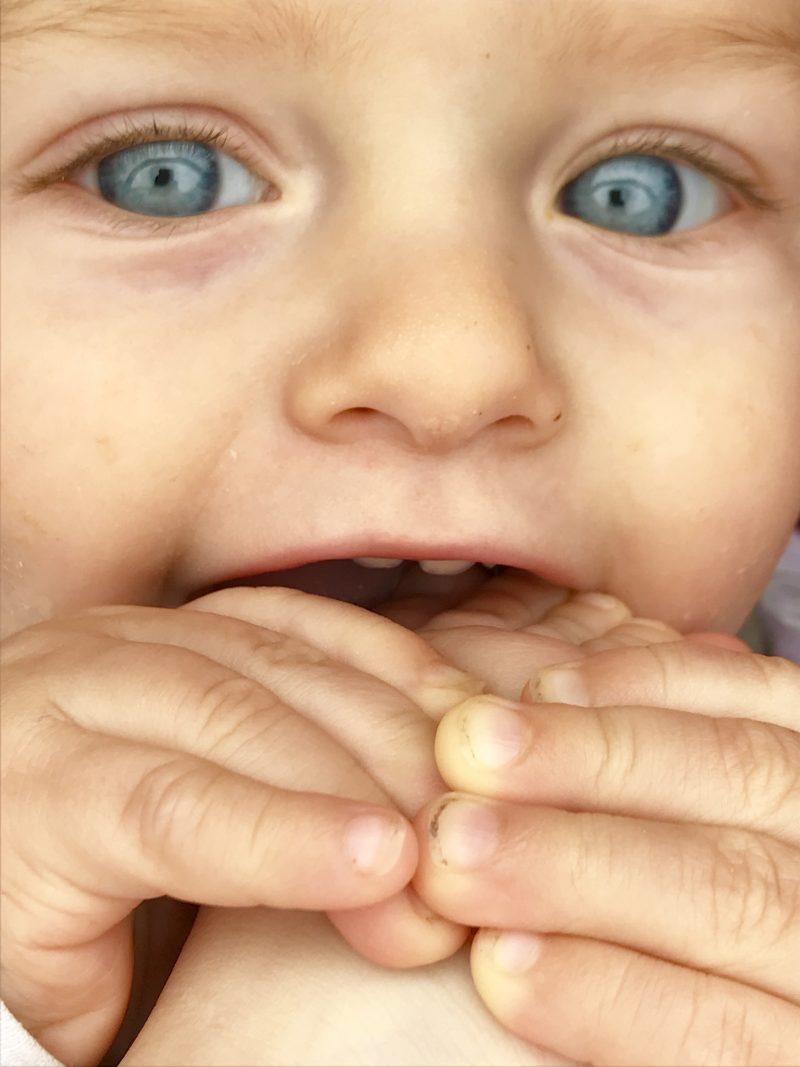 There you have it, Alex at one year old! This will be the last of Alex’s monthly baby updates, I will obviously still be talking about him non stop on the blog and writing about all his milestones but the point of these updates was to document his first year and now that is over – I still can’t believe it! I hope you have enjoyed joining us for this whirl wind first year, if you have an October 2016 baby too then I hope they have had a wonderful birthday.

If you are interested in baby development then you can find everything from sleeping, feeding and milestones is Alex’s baby updates posts. If you are pregnant or just interested in pregnancy then you might also enjoy reading my monthly bump updates.

Has your little one recently had their first birthday? I would love to hear your experiences of baby’s first year and how you are getting on.