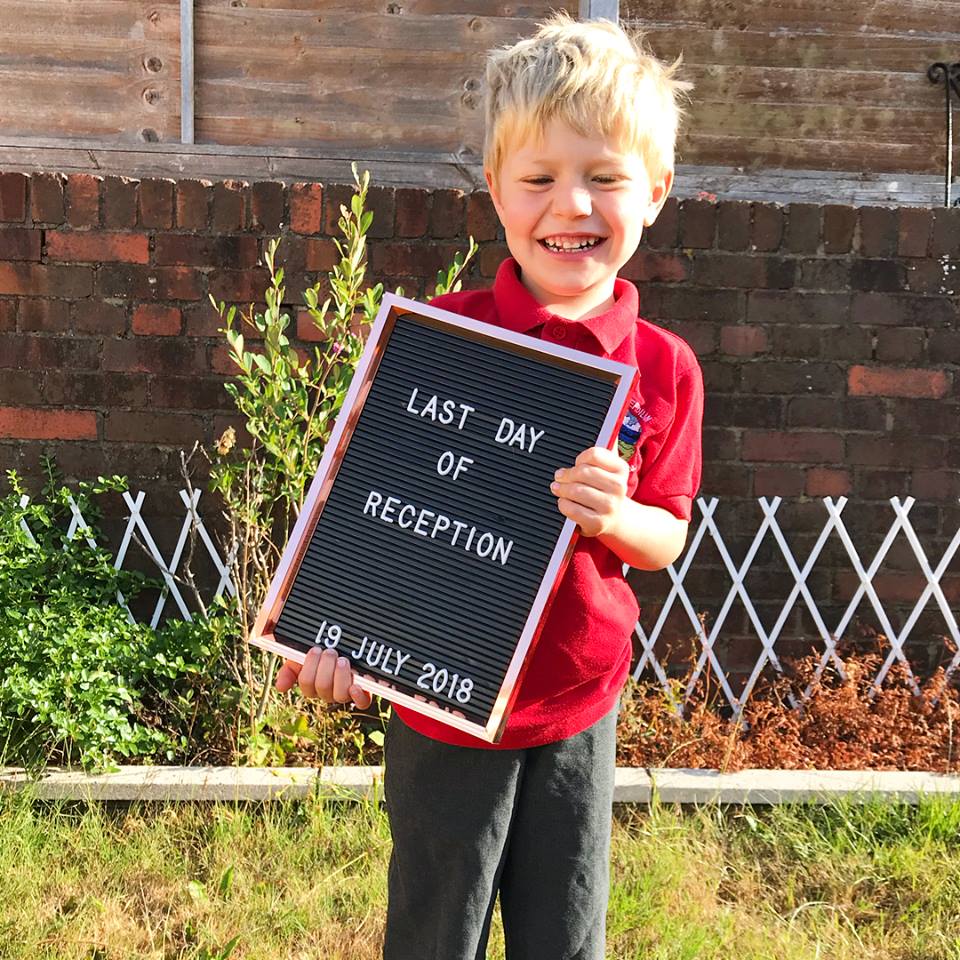 How has this happened? Leo has finished his first year of school. Reception year is over, done, finito! As with most stages of parenting, I feel like the time since his first day has just whizzed by. With today marking Leo’s very last day of reception, I thought now would be a good time to reflect on Leo’s first school year and to see how far he has come since September.

Looking back on Leo’s first year of primary school.

When Leo started school in September, we had just moved house (literally the day before!) and he was a bundle of excitement for his first day of ‘big school’. His school trousers hung off his non existent hips, he looked so grown up thanks to a fresh big boy haircut and his jumper almost swallowed him whole. I don’t think he’d ever looked so big and so small all at the same time before. Leo is an August baby so was the youngest in the class and it did take him a little time to get into the swing of school life. There were a lot of occasions where I was asked for a quiet word with the teacher in the playground at the end of the day. Leo seems to cope with his emotions and overwhelming feelings by lashing out and there was a fare bit of lashing out at his classmates in those first few months.

Leo did settle in though and he really loved going to school. He grew and grew in confidence as the year went by, he started learning to read and write and absolutely loved playing the donkey in his first ever school nativity. Leo knew a lot of the children in his class already as they went to play school together and there was one little girl he had a very special bond with, he was always telling me he loved her. You might be wondering why I’m telling you all this in the past tense? Well, we moved house again in May, this time it wasn’t to a different house in the same town but instead we relocated back to Wales. Leo was excited to be moving closer to family but so sad to be saying goodbye to his friends, his teachers and the school he loved. 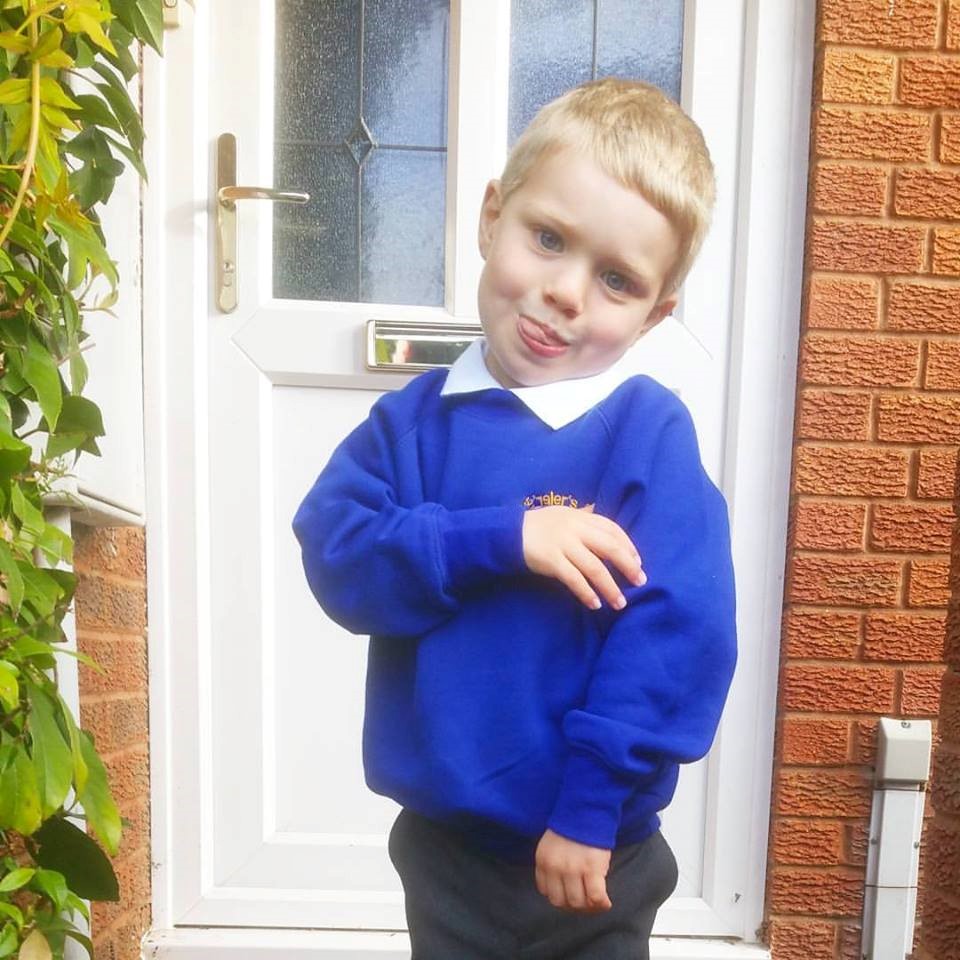 On Leo’s last day lots of tears were shed, he cried, his teacher cried, I cried and I’m pretty such the headmistress started to well up too. Leo really loved that school and had a great relationship with his teacher, he completely adored her. I am so grateful that Leo started his school life in such a wonderful school, somewhere that not only has a great teaching record but also has a wonderful, nurturing and kind ethos. Leo still talks about all his old friends and teachers; they made him a big goodbye card on his last day and I know he’s going to cherish it for a very long time, he still loves looking at it.

For his last term of reception year, Leo became a member of his new primary school here in Swansea. There has been a big relapse in his behaviour, he’s started biting and hitting his classmates again and being rude to the teacher. This isn’t my boy though, I know he’s acting this way because he’s overwhelmed and doesn’t know how to express it. His new teachers are lovely but he hasn’t really bonded with them in the way he did with his old teacher. The children all seem lovely too but I think Leo is struggling to make friends, he’s choosing to play on his own a lot and I’m wondering if this is because he’s feeling a bit nervous around all these new people. I can’t help but feeling guilty that Leo has gone backwards a bit with his school life, if we’d stayed in Hampshire he’d probably still be thriving in the classroom environment and he would still have a big group of friends. Moving back to Swansea was definitely the right decision for us though and I’m sure things will pick back up again after the summer holidays.

I am so so incredibly proud of Leo, he is so young but has taken to school so well – I still can’t believe he can read, write and spell a bit too. He’s grown so much, his trousers skim his ankles now, his school jumper only just fits over his head and his legs are covered in little bruises from where he’s been a bit too adventurous in the playground. Up until we moved, his confidence was growing almost every day, he would sing to the whole class, recite all his phonic sounds without worrying about getting them wrong and hug everyone in his class and shower them all with love. I have everything crossed that this confidence comes back soon and he can start year one in September full of the enthusiasm for learning, positivity and confidence that I know is still in him somewhere. Being a school run Mum has been an experience and I have had to learn a lot. While I still feel I have some way to go before I’m the perfect mummy at the school gates, I don’t think I’m doing a bad job being there for Leo and supporting him as he adjusts and settles in to primary school life.

Starting school was such a massive milestone and somehow the first year is now over and we have all made it through in one piece. This time last year Leo was saying goodbye to play school and now he’s drawing a big fat tick next to reception, can we just press pause for a minute please?!

I guess all there is left to say is, goodbye Reception and hello to Year One!

Has your child just finished school for the summer too, can you believe how fast the time goes? I would love to hear your stories and experiences from your child’s first year of school.

If you enjoyed this post you may also like to read..
25 things to do before your child starts school
Why you don’t need to worry about sending your summer born child to primary school
Everything I learnt from my child’s first term at school
I miss you  now you’re at school
Starting primary school – the mummy bloggers guide
The end of an era – my baby is going to big school
Tips to help your child settle in to a new school